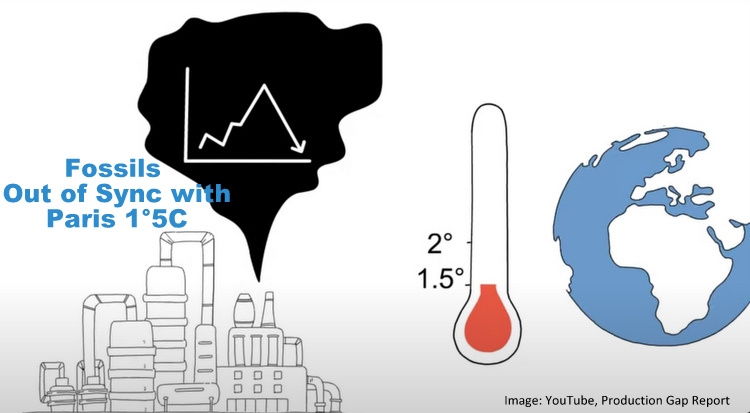 Fossils Out of Sync with Paris 1.5°C

The main findings include: (sourced from the press release)

In the report Canada shows up as the world’s fourth-biggest oil and gas producer, and global fossil fuel production in 2030 will still be more than double the amount that would match a 1.5°C climate pathway, according to the 2021 Production Gap Report by the United Nations Environment Programme (UNEP),” writes Mitchell Beer in The Energy Mix.

In yet another recent article, Beer focused on the IEA’s (International Energy Agency) call for a much “faster fossil phaseout and more renewables investment to keep 1.5°C withing reach.” Current climate pledges “cover less than 20% of the gap in emissions reductions that needs to be closed by 2030 to keep a 1.5°C path within reach,” says the IEA World Energy Outlook report.”

To shift those trends, the IEA Report calls for: (excerpt from The Energy Mix)

• A doubling of countries’ current commitments to deploy photovoltaic solar and wind, along with a “huge buildout” of grid infrastructure, greater flexibility in electricity systems, more reliance on hydropower, a rapid coal phaseout, electrification of transportation and space heat, and “use of nuclear power where acceptable”;

• A “relentless” focus on energy efficiency, making better use of materials and shifting behaviours to speed the reduction in the amount of energy the global economy uses for each unit of output it produces;

• A “big boost” to clean energy innovation, focused on technologies like hydrogen, low-carbon fuels, and carbon capture, utilization, and storage—particularly to drive emission reductions in energy-intensive industries like steel and cement, and in long-haul transport. While “all the technologies needed to achieve deep emissions cuts to 2030 are available,” the IEA says, nearly half of the reductions required by 2050 “come from technologies that today are at the demonstration or prototype stage.”

“Every data point showing the speed of change in energy can be countered by another showing the stubbornness of the status quo…for all the advances being made by renewables and electric mobility, 2021 is seeing a large rebound in coal and oil use. Largely for this reason, it is also seeing the second-largest annual increase in CO2 emissions in history.” — IEA