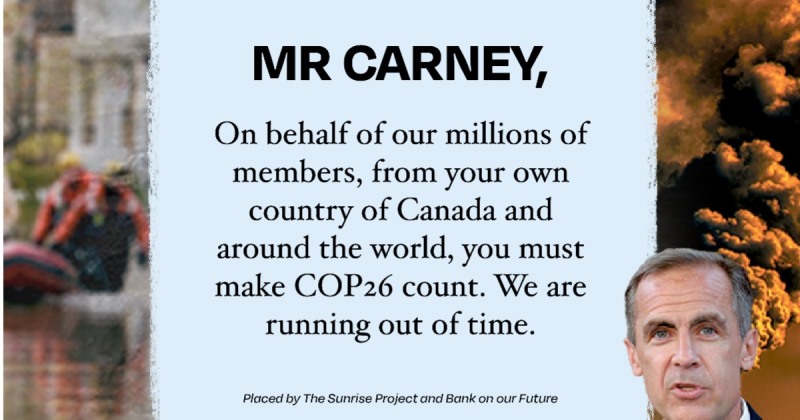 Over 90 groups are urging Mark Carney—in a letter published worldwide—to do all he can to “raise the bar on climate action from the finance sector that leads to a reduction in financed emissions at the pace that the science demands.” Mark Carney is the UN Special Envoy on Climate Action and Finance and former governor of the Bank of England and the Bank of Canada.

While his work to convene financial institutions to take climate actions is laudable, Mark Carney is facilitating the watering down of net zero rules for finance, climate groups argue, as his green alliances fail to adopt the latest International Energy Agency (IEA) findings on net-zero emissions. Members of the alliances have continued supporting companies expanding coal, oil and gas industries, with civil society arguing that this must end for the alliances to be fit for purpose.

The groups are asking the former Governor of the Banks of England and Canada to integrate the findings of the IEA into the Glasgow Financial Alliance for Net Zero (GFANZ), which sets guidelines for the investors, banks, and insurers who have joined to show their commitment to net zero emissions. The IEA has said that no more coal, oil, or gas expansion are permitted if we are to limit global temperature rise to 1.5°C, a finding that is driving a global consensus that in order to meet the goals of the Paris Agreement, there is no room for any further fossil fuel development.

“The membership requirements for these net zero initiatives are set too low and as a result these alliances are doing the opposite of what they’re supposed to,” said Richard Brooks, Climate Finance Director with Stand.earth. “Rather than forcing banks and other financial institutions to step up their climate action, they’re giving them the cover to continue their dirty financing of fossil fuel companies. We are running out of time and can’t waste it on more greenwashing talk.”

Finance continuing to back fossil fuels

Banks always talk about their new green finance contribution and conveniently fail to mention their ongoing dirty financing. If that sounds like a lot of greenwash, that’s because it is. — Catherine Abreu, National Observer OpEd

For example, Citi, Commerzbank, and Bank of America are all GFANZ members and helping to arrange funds for SUEK, a Russian coal giant that is relying on this extra financing to expand its coal mining and power business. Brookfield, a member of the Net Zero Asset Managers Initiative, and of which Mr. Carney is Vice Chair, is working to purchase Inter Pipeline, one of the largest oil sands and gas infrastructure companies in Canada.

The majority of GFANZ signatories have not submitted detailed plans to reduce their fossil fuel investments; they lack near-term targets for emissions reductions, and do not rule out reliance on discredited offsetting schemes and other unproven carbon dioxide removal technologies.

The letter’s signatories, many of which come from Carney’s home country of Canada, say that financial institutions that take their role in the climate crisis seriously must:

COP26, which has been billed the ‘finance COP’, has focused attention on the actions of the UK government and its finance industry. There is growing concern that in the run-up to the conference financial institutions are using industry initiatives like GFANZ as cover for their continued support for coal, oil and gas expansion.

“The washing down of net-zero emission allows harmful extractivism to continually infringe on the rights of Indigenous peoples and their lands,” said Amber Bernard, External Media Coordinator with Indigenous Climate Action. “Instead, we need divestment from dirty oil and gas industries, especially when they don’t have the free and prior informed consent of Indigenous peoples.”

“If we just rely on Mark Carney’s voluntary alliances, polluting banks like JP Morgan, who haven’t signed up to GFANZ, will simply pick up all of the fossil fuel business their competitors pass up on. It’s actually in everyone’s interest to set out regulation that levels the playing field,” said Simon Youel, Head of Policy and Advocacy at Positive Money.

“Instead of waiting around for bankers, we need strong rules from our public institutions to ensure the entire financial system is aligned with the climate targets governments have committed to via the Paris Agreement. This means regulators taking action to prevent investment in new fossil fuel projects, consistent with the International Energy Agency’s net zero pathway.”

You can see a full copy of the letter, signatories and the ads in the Financial Times and Toronto Star at Stand.Earth.

ICYMI:
Is COP26 the Answer We’ve Been Waiting For Or a Dangerous
24 Hours of Climate Reality: What’s Different This Year