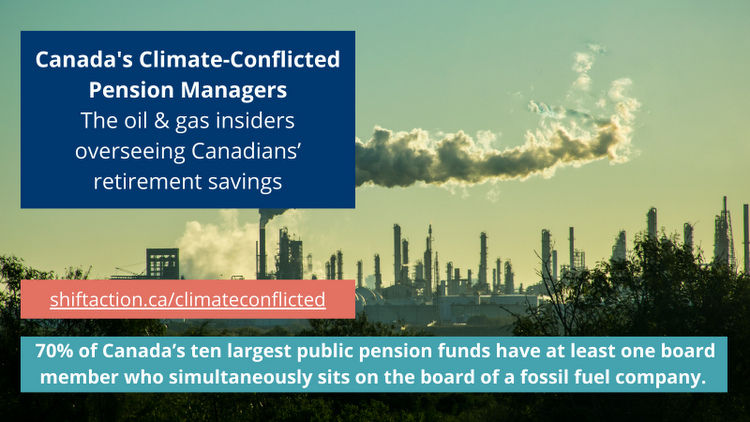 (This article was previously published in The Energy Mix.)

Deep Entanglement: oil and gas insiders and your pension fund

The “deep entanglement” between Canada’s 10 biggest pension funds and a roster of 76 fossil fuel companies raises serious questions about whether fund managers and trustees are looking out for the best interest of the beneficiaries who depend on them, according to a scathing 40-page report released  by Toronto-based Shift Action for Pension Wealth and Climate Health.

The list includes Lisa Baiton, the former member of the global leadership team at the Canada Pension Plan Investment Board (CPPIB) who recently signed on as CEO of the Canadian Association of Petroleum Producers (CAPP).

“We just saw that as another symptom of the inappropriate connections between private industry and what is essentially a public institution,” Shift Action Director Adam Scott told The Energy Mix. “For fossil fuel industry investors, it’s in their best interest to delay climate action, mislead the public, and continue to expand and lock in fossil fuel production, but none of those things are in the long-term best interest of pension beneficiaries.” That collision, in turn, “is the overarching theme in the report,” he added.

“These two interests are not aligned, so it makes no sense to have overlapping directors.”

“If a pension administrator simultaneously serves as the corporate director of an oil and gas company, beneficiaries could ask serious questions about whether that conflicts with the duty to invest in their best long-term financial interests.”

“Seven of the 10 pension funds have at least one board member who simultaneously sits on the board of a fossil fuel company,” Shift writes. “In some cases, over a quarter of the pension fund’s board has direct connections to the oil and gas industry.” The list includes:

From the Shift Action toolkit: The analysis finds that among Canada’s 10 largest pension funds, which together manage more than $2 trillion in assets:

History of obstruct, weaken, water down, and resist climate action

In some cases, over a quarter of the pension fund’s board has direct connections to the oil and gas industry.

“Even as Canada’s public pension funds move to acknowledge, measure, and manage the growing financial risks of climate change, their progress may be held back by their multi-layered connections to an incumbent fossil fuel industry,” the Shift Action report states. “Fossil fuel companies have a long and well-documented history of active efforts to delay, obstruct, weaken, water down, and resist climate action that could negatively impact their business model. Significant entanglement with fossil fuel interests therefore has the potential to complicate the difficult decision-making required today for Canada’s pension funds to effectively manage climate-related financial risk.”

Scott said the overlapping interests between pension officials and the fossil industry contributes to a “blind spot” that makes it harder for funds to recognize the risks the climate emergency creates for the retirement funds their beneficiaries rely on.

“It does go a long way to help explain why the view of so many financial institutions is so distorted when it comes to climate,” he said. “They really don’t seem to fundamentally understand what solving the climate crisis requires. It’s a lack of literacy about the crisis itself, and that’s just egregious.”

While it may have made sense in the past for pension and other financial sector managers to deeply understand a booming fossil industry, pension directors today “need real expertise in navigating the existential challenges that climate crisis poses for their future,” he added. “That includes literacy on climate change, but also expertise in the global energy transition, because that’s where the opportunities lie. We’re just not seeing nearly enough of that expertise on boards.”

Ten to 15 years ago, “having energy sector directors was considered really good business practice for the pension funds because they were a very profitable sector, and therefore that business acumen was considered of value to the board,” agreed Dr. Janis Sarra, a member of the Canada Climate Law Initiative and professor at the Peter A. Allard School of Law at the University of British Columbia. But now, “that’s becoming an increasingly live question. When we need to be attracting directors with real business acumen in transition and effective climate governance, maybe the pragmatic question is whether the business model for selecting the trustees is outdated and needs a rethinking. That’s a really important issue in the interest of pension beneficiaries.”

As long as pension directors do have close associations to the fossil industry, Scott said they must withdraw from decisions on the institutions’ fossil investments. “They should be legally removing themselves from some of those conversations,” he said. “They’re conflicted, so they have to step back.”

Sarra said pension funds have no obligation to disclose whether directors exclude themselves from decisions in which they have a direct interest—but she agreed the fossil-affiliated ones should do exactly that when it comes to their institutions’ oil and gas investments.

“If they’re still financially benefiting from whatever happens in the oil and gas sector, if those current economic interests are still there, then they should be recusing themselves from any discussions, let alone votes,” she said, in order to uphold their duty of loyalty as pension trustees.

No legal duty to disclose

Even without a legal duty to disclose, “if I were a pension board and I had a director from the oil and gas sector, I would be telling the beneficiaries that we have this representation, but this is how we deal with it,” she added. “The duty of loyalty is not a new issue, and it’s incredibly important for all pension fiduciaries, but this report reveals that the degree of overlapping interests is much more extensive than perhaps the public and pension plan members knew.”

Scott said it’s hard to give pension plans the benefit of the doubt on transparency when they share so little information about their management of climate-related financial risk. For example, “they say they’re engaging with companies they own about climate but they don’t explain what that means,” he told The Mix. “What are the expectations they have for these companies? How do they evaluate progress, and what happens if a company doesn’t comply with what the engagement is asking? None of that is clear. They’re not setting clear and transparent expectations.”

“It is reasonable for a beneficiary to ask if the people responsible for managing and overseeing their pension fund [are able] to invest in their best long-term interests if [their worldview] assumes the continued financial success of fossil fuel companies that lack credible Paris-aligned transition plans, lobby against climate policies, or rely on high-risk investments that extend the life of oil and gas.” — Patrick Derochie, Shift