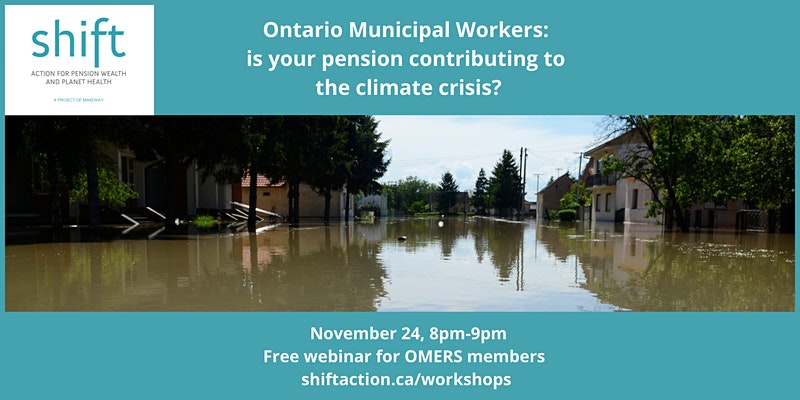 If you’re a pension fund beneficiary or contributor, how your retirement savings are invested is of utmost importance as the world enters the era of climate crisis. Is your pension fund contributing to climate change? Is it making global warming worse? These are questions Shift Action will explore in upcoming webinars on November 24.

(This post will focus on OMERS — Ontario Municipal Employees Retirement System — for two reasons. Firstly, I’ve been an OMERS beneficiary since my retirement some 18 years ago. And I’m concerned that OMERS is investing my retirement money in fossil fuels, offsetting any positive impact and contribution I’m having as a climate activist. And secondly, we’re in a climate crisis. The content of the post is sourced from Shift Action.)

My Pension Fund (OMERS) Is Fueling the Climate Crisis

In a warming world, your pension fund’s investment decisions matter. OMERS manages over $114 billion in municipal workers’ retirement savings. OMERS’ investments can have a huge impact on how quickly we can build a zero-emissions economy and rein in devastating community impacts. The decisions of pension funds like OMERS influence whether businesses in Canada and other countries build electric cars and solar panels, or diesel engines and gas pipelines.

OMERS Must Do More

OMERS has a long way to go in its approach to climate change, and continues to invest in climate breakdown. Many leading funds have gone much further than OMERS in understanding and protecting pensions from the financial risks of climate change. Some pension funds have set targets for investments in clean energy. Others have set goals to cut climate pollution across the assets they own. Leading pensions have completely eliminated fossil fuels from their portfolios.

Shift is Asking OMERS to:

OMERS has begun to assess and respond to the financial risks of climate change, for example by:

However, OMERS continues to invest hundreds of millions of dollars in fossil fuel infrastructure and companies fueling the climate crisis:

I’m concerned that OMERS is investing my retirement money in fossil fuels, offsetting any positive impact and contribution I’m having as a climate activist. — RMontpellier, OMERS beneficiary

Join municipal employees across Ontario and climate and energy experts from Shift Action to learn how you can help protect your pension and tackle the climate crisis.

Register for this free online workshop for working and retired members of OMERS. Learn about your pension fund’s approach to the financial risks of climate change and fossil fuel investments, and what it means for your retirement savings.

Register here for the Free Webinar

Tell OMERS to protect your pension and the planet. Send a LETTER to fund managers and your union leaders.

If you belong to a public pension fund other than OMERS, for example, Ontario Teachers or HOOPP, you can still take action here.