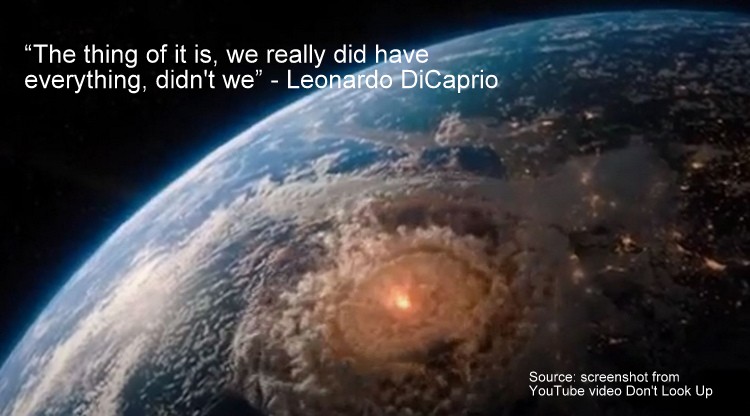 In a recent article in the “Climate Change Is Coming for Us” series, Brad Zarnett writes about how climate propaganda has shaped our approach to fighting climate change. In the first half of the piece he says “We squandered the greatest sweetheart deal imaginable,” reminiscent of “the thing of it is, we really did have everything didn’t we,” words echoed by Leonardo DiCaprio seconds before impact in Don’t Look Up.

This post focuses on three common messaging fantasies we live by that have thwarted our efforts to limit the warming of the planet to no more than 1.5°C, considered to be a relatively safe level by science. The full article was previously published in bradzarnettsubstack.com.

Propaganda works and reality can be constructed. Humans can be made to believe just about anything — even if it works against their best interests.

Most people want to feel like they’re generally a good person. This is the bread and butter of marketers and propagandists. They tell us that we can have whatever we want and that our consumption is an important part of the economic ecosystem. It’s an easy lie to believe. By becoming a “champion consumer”, we can get cool stuff while simultaneously providing opportunities for others, so the story goes, while making the world a better place. A beautiful win-win. So hold your head high as you drive your Chevy Suburban to your newly built 6000 square foot retirement summer home. Your plan to fly guests in for weekend visits to play on your new pair of jet skis, while you watch your sustainable (ESG) stock portfolio rise, is the culmination of a life of hard work. You’re a hero of global prosperity!

We can solve climate change by letting capitalism use the power of markets to usher in a new era of “green prosperity”. There’s no need to fundamentally change how we live our lives — we just need to bring more renewables online, eat more manufactured meat, drive electric vehicles and aggressively expand the use of experimental carbon capture and storage…all of which are wins for both the economy and the environment. This is a big stinking pile of excrement. A dangerous fantasy. A well advertised illusion fed to us by the so-called “mainstream”. Or, perhaps, it’s best described as theatre, orchestrated by those who have benefited the most and who wish to maintain our wealth-concentrating system.

Perhaps the most insidious lie is the one that shapes how we structure our lives. The “mainstream” assures us that future success will follow a similar path to what worked for past generations. A solid education. A good degree. Start a business or find a well paying job. Work hard. Buy a home. Invest in the stock market. And then enjoy a comfortable retirement as you watch your grandchildren take on the world. But that pathway no longer exists. How could it? It’s based on a healthy natural world that provides us with invaluable and seemingly endless life-sustaining “ecosystem services’’, and in our greed and hubris we’re in the process of torching it.

The lies of the elites are robbing us of the opportunity to prepare for what’s coming and that’s the most cruel lie of all. Most people are working under the illusion that a particular type of education, capital accumulation and sound investments are the safest path to a better future, but with climate change and ecological collapse a near mathematical certainty, that pathway is no longer the safe bet that it once was. Food shortages and surging inflation will start the ball rolling but massive forest fires, freakish flooding and oppressive month long heatwaves won’t be far behind. Supply chains for nearly every product will break down and social unrest will erupt. Hundreds of millions of people will learn the hard way that their plan for a bright future was built on a bed of lies. At least if they were told the truth and not some fantasy, they could have better prepared for the future that the “out” group tried to warn us about.

So Where Does that Leave Us?

From the early days of humans sitting around the campfire — we are natural born storytellers. It’s how we make sense of the world. Stories tell us about who we are, where we belong and where we’re going, but one has to wonder if the lie of capitalism will be the last story that we tell ourselves. Will we double down on our collective delusion and focus on the glory of our progress and celebrate how everything that we could ever want is now just a click away? Or will we break free of the illusion and pull back the curtain to acknowledge the environmental harm that our economic system has caused; biodiversity loss, ocean acidification, arctic melting, amazon deforestation and climate change to name a few.

Ignoring the truth can’t be our best strategy. We need to wake up and deal with the lies. The truth is that we can’t completely stop climate change but we can minimize it and we can prepare for it. But as it stands now, if we don’t confront and dismantle the propaganda infused reality, orchestrated by the elite and their pathological need to remain at the top of the money and power pyramid, our future will be bleak. Whether we’re prepared to admit it or not, we’re heading directly to a fascist and fiery end where people are left standing in a barren wasteland fixated on the last remnant of the system that destroyed them — a livestream of the latest stock prices.

Don’t be fooled by the mainstream narrative which tells us to buy electric cars and reduce our meat consumption. These are positive choices but this is a dangerous message as it diverts our attention away from where we should be focusing…prevention at all costs, and unfortunately preparation of what’s to come.

For future generations — we must do better!!

ICYMI
Oil and Gas Insiders Overseeing Canadians’ Retirement Savings
Scientists Stepping Up To Fight the Climate Crisis
Climate Action: Why Are We So Stuck?