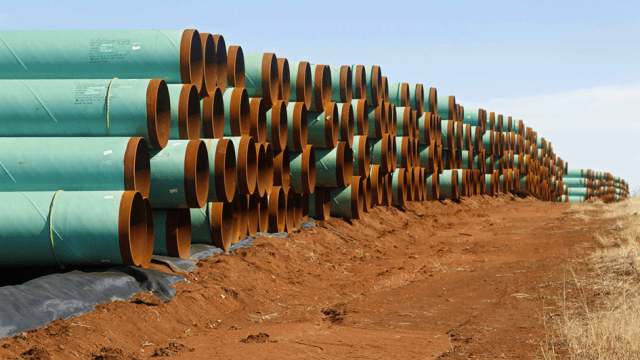 In the most contentious veto of his tenure, President Obama has rejected legislation that would have cleared the way for construction of the Keystone XL Pipeline. For now, at least, completion of the 1,200-mile conduit bearing crude from Alberta’s oil sands remains on hold. What continues, however, is the debate raging around jobs the project was expected to create.

Even before the bill reached his desk, Republicans were lining up to slam the President’s veto as a job killer. As The Hill reported:

Republicans are eagerly awaiting Obama’s stroke of the pen, believing every veto he makes will help them make the case that job-creating legislation is being blocked by a president of “no.”

“This is the first piece of legislation on his desk . . . and he will have to choose between hard working Americans and taxpayers or environmental extremists,” said Sen. John Barrasso (R-Wyo.), a staunch Keystone supporter.

“We will keep our word to the American people, and we are going to keep sending bills to his desk,” he added.

If it’s all about jobs – we’ll table the climate change discussion for now – then let’s talk about jobs.

You Want Jobs? Try This

The Keystone XL will reportedly create roughly 42,000 jobs, most of them construction jobs lasting about 19 weeks. This sounds like a lot of jobs until you consider that our economy is adding hundreds of thousands of jobs every month, 257,000 added in January alone.

Still, 42,000 jobs, even if they’re temporary, is nothing to sneeze at. The reality, though, is that Keystone XL is not happening any time soon. So, if this Congress is “going to keep sending bills to his desk,” there is legislation the President would likely sign that will produce way more than 42,000 jobs.

In fact, there is a legislative proposal that would add 2.1 million jobs to the economy over the next decade without the federal government having to spend a dime to create those jobs.

Not only that, but in addition to creating jobs, this proposal would reduce greenhouse gas emissions to levels that could avert the most severe consequences of climate change.

The proposal I’m talking about is George Shultz’ Carbon Fee and Dividend. Shultz, former Secretary of State under Ronald Reagan, promotes this plan as the conservative answer to climate change, because it won’t increase the size of government.

A steadily-rising fee – starting at $15 per ton of carbon-dioxide – is placed on fossil fuels at or near the first point of sale, increasing by $10 per ton of CO2 each year. Revenue from the fee is divided up equally and returned to all households. Border adjustment tariffs are placed on imports from nations that do not have an equivalent carbon-pricing mechanism in order to maintain a level playing field for American businesses.

Regional Economic Models, Inc. (REMI), a firm that corporations, governments and academic institutions turn to for economic forecasting, conducted a study on the Carbon Fee and Dividend proposal.

Here’s what REMI found: After 10 years, CO2 emissions would be cut 33 percent and 2.1 million jobs would be added to the economy, primarily because of the economic stimulus of recycling tremendous amounts of revenue into the pockets of people who are likely to spend the money.

That’s right. We can cut carbon emissions while ADDING millions of jobs to our economy. If you’re a member of Congress, trust me: You won’t lose votes by passing a bill that puts a check in everybody’s mailbox each month.

So, if this Congress is “going to keep sending bills” to the President’s desk in an effort to create jobs, make one of those bills Carbon Fee and Dividend. I have a hunch Obama will sign it.
____