Below 2C
Home Socio-Politico Economy Is Sustainable Growth an Oxymoron? 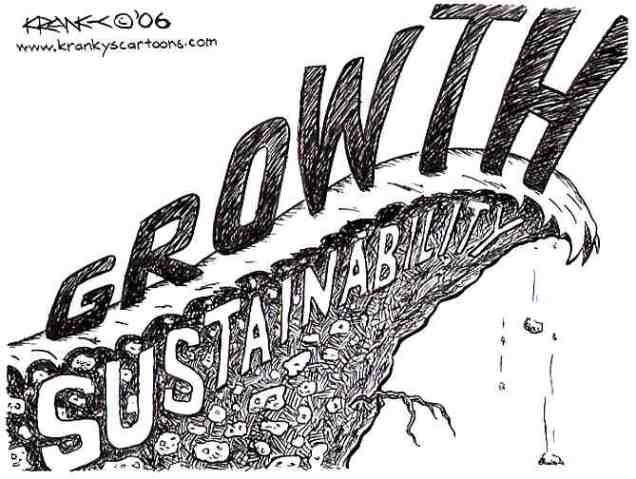 We do a lot without thinking, like using GDP growth as a standard of excellence. Most 21st century activity is based on a ‘given’ that underpins the soft science of economics: ‘Growth is good’ — not just a big assumption, a wrong assumption. Pudding with no proof.

Let’s face it, the economic crisis was good news for the environment. Greenhouse gas emissions dropped by half during the economic low point in 2008.

The Myth of Sustainable Growth

Senior Economist at the World Bank, Herman E. Daly and Dr. Kenneth N. Townsend have proven that we can’t grow our way out of poverty and environmental degradation. Sustainable economic growth is impossible, since the economy is an open subsystem of the Earth’s ecosystem, which is finite, non-growing, and materially closed. As the economic subsystem grows, it engulfs more and more of the ecosystem in which it exists and is bound to reach a limit when it ‘incorporates’ (their word) 100 percent of the ecosystem, if not before. Thus, the economy’s infinite growth is by Nature not sustainable.

I encountered an enlightening microcosm of growth while strolling through a Sogetsu Ikebana exhibition listening to spectator comments.

“When we are in a beautiful garden, we feel happy, but what we don’t realize is, each of the plants in that garden is actually fighting each other for the space to grow. And some plant species are actually at war with others,” says author Rene Bersma, observing an arrangement by his wife, Atsuko Bersma, Ikebana Sensei. “We just think it’s a beautiful, colorful compilation of flowers and bushes and everything together, and we sometimes don’t realize that some plants don’t like each other and fight for very valuable space.”

In that context, governments’ fossil fuel subsidies, which total $ 1.9 trillion annually according to International Monetary Fund reports, can be considered a weed choking sane investment. Not only do our governments give money to fossil fuel © companies directly, but those same companies turn around and dump huge cleanup costs on society, a practice called ‘negative externalities.’

1. There are selective things we would do well to invest in, like traveling with our minds instead of our bodies. Virtual meetings are where it’s at. Buying a round trip ticket for one seat in an airplane from New York to London puts as much CO2 into the atmosphere as a house does in a whole year, so we should look hard for ways to meet virtually, rather than flying around.

2. If you want to know what the next big trend is, ask kids. They’re usually on to something. Virtual book tours have been popularized by young adult sites like, LitPick, an American Association of School Librarians’ award-winning Best Website for Teaching and Learning. The virtual book tour is the same concept as flying from city to city doing readings in bookstores, but instead of flying around, the author tours from blog to blog. That smacks of so much common sense, it’s no wonder so many older adults are turning to the honor and purity of YA literature–the average age of a YA reader is now between 30 and 44 years old.

Authors on virtual book tours can stop for an interview with LitPick Co-founder Gary Cassel, where they talk about everything from what inspires them to write books to sharing the Earth with their animal friends. LitPick even has an environmental shelf with over 270 great pre-teen and teen books on it. This unique site allows students to read new and advance books they get for free and then write and publish their opinions about the books. “The opinions of students about books written for them are very powerful and compelling, more so than adult reviews of preteen and teen literature,” says Gary. “We also help promote better writing by giving students feedback on their reviews.”

The next activity worth selecting to grow is the wearing of super-warm onsies. Why go out when you can stay home in your hot pajamas and turn down the heat? This piece of clothing comes in all shapes and sizes, from serious to silly, complete with nightcap hoodie, and will erase years off your heating bill.

3. The third thing is so retro it hardly needs explaining. It has to do with modifying that bicycle collecting dust in the basement so it can haul groceries and ride in the dark. People who sit all day have an increased risk of death. With a third of the U.S. officially obese, investment in physical activity can only result in positive shrinkage.

I’m going to put on my onsie, stay home, and catch the darling of the Traverse City Film Festival, ‘Two Raging Grannies’… standing up.