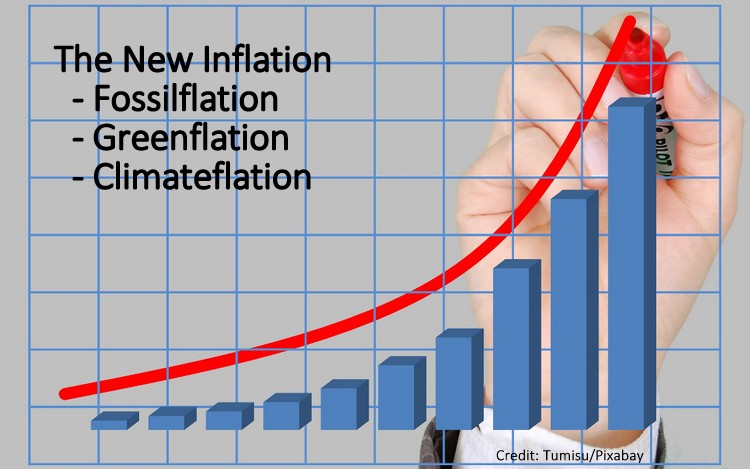 “If inflation is top of the public mind, the conversation should be about the F-word — how much of our economic problems are rooted in our dependence on fossil fuels,” wrote Chris Hatch in a recent ZERO CARBON newsletter. We’ve entered a new age of hyper inflation—a patchwork of fossilflation, greenflation, climateflation.

(This post is sourced primarily from Chris Hatch’s June 24th newsletter write-up on fossilflation, with editorial add-ins and additional features.)

“Inflation. A word dripping with dread and one on the lips of most everyone these days. Political pros say nothing except the cost of living matters to most voters right now, and it’s astonishing how rarely we hear that inflation is fossil-fuelled.

On one hand, fossilflation is just obvious — the price of gas is up in lights on street corners and rest stops. But inflation is a thorny problem for climate action. Politicians are under pressure to curb gas prices, Big Oil is cashing in, and the public has little appetite for spending more money on energy projects.

Close to half of current inflation is due to energy prices. That’s true in Canada as well as the United States and it’s even higher in other parts of the world. And it’s worth remembering that oil was surging past $90 per barrel even before Putin’s fossil-fuelled invasion of Ukraine.” — Chris Hatch

The following tweet raises a red flag over the confusing terminology describing the new inflation. Some climate observers worry that climate delayers, some politicians and the fossil fuel sector will use “greenflation” and/or “climateflation” as their whipping boy to shift attention away from the real cause—fossil fuels—of the multiple crises the world faces.

“Greenflation” refers to the rising costs and the “gold rush” on precious metals and minerals needed to fuel (pun intended) the clean energy revolution, whereas “climateflation” refers broadly to price increases caused by climate-related natural disasters and physical risks.

During a speech delivered in March in Frankfurt, Germany, Isabel Schnable (member of the Executive Board of the ECB) spoke about the interplay of the three components of the new inflation: fossilflation, climateflation, and greenflation. “Europe and the world are facing a watershed moment…Today, our dependence on fossil energy sources is not only considered a peril to our planet, it is also increasingly seen as a threat to national security and our values of liberty, freedom and democracy,” said Schnable.

“Greenflation” is the sharp rise in the price of materials, minerals, and capital used in the creation of renewable technologies.

The transition to a clean energy platform is already under way and it is necessary even if it triggers inflation. However, some economists like Rudolf Hickel (German economist and author) worry that “the exploding prices are likely to reduce acceptance among the population for the energy turnaround.”

The cost of adaptation to the impacts of climate change—extreme weather, wildfires, storms, floods, droughts—caused by fossil fuel use will be in the hundreds of billions per year by 2030 and the sky is the limit for the decades that follow.

“Fossil fuels don’t just drive up the cost of living directly, either. They drive up extreme weather and droughts, crippling farms and causing costs to soar on everything from staples like wheat to condiments like sriracha sauce. We could add on the costs of fire and flood, of insurance and rebuilding and ruggedizing. The list of economic damage and “climateflation” goes on and on, even before we include the toll on lives and livelihoods.” — Chris Hatch

As the recent Ontario election showed, politicians need to be preoccupied with inflation. The rising cost of living was the top issue along with health care. Regrettably voters generally fail to connect the dots between our addiction to fossil fuels, the soaring cost of living and the accelerating impacts of climate change.

We are failing to take advantage of a teachable moment that would allow the public to see the climate crisis not only as an environmental issue but also a far-ranging economic issue. Perhaps this current round of “climateflation” will open eyes to the pervasiveness climate change.

With inflation soaring, “the nation-building project Canada needs right now” is a transition to clean energy—not a return to the costly past, reads this new take from the National Observer. Investing in clean energy now will protect Canadians from “the dangers of depending on a commodity that can double in price in a single year.” —Trevor Melanson and Keri McNamara, Clean Energy Review

ICYMI:
Electric Vehicles Are Making Gas Stations Obsolete
40% of Developed Fossil Fuel Reserves Must Stay in the Ground
It’s Time To Stop Fixing the Old and Start Building the New