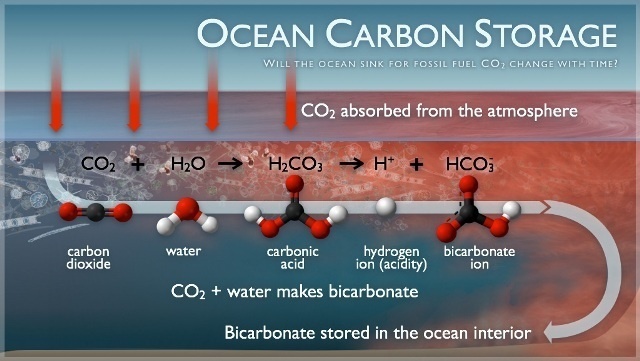 Share to raise climate awareness
I’m pleased to welcome Stephen Leahy as a contributor to BoomerWarrior. Stephen is an independent environmental journalist and author of a new book, Your Water Footprint: The Shocking Facts Behind Our Thirst for Earth’s Most Precious Resource, which was previously featured on BoomerWarrior. You can learn more about Stephen in the bio at the end of this post. (Rolly Montpellier ~ Editor, BoomerWarrior).

The ocean is, in essence, the kidney of our planet, keeping its systems healthy and productive. But the ability of the ocean to continue to provide these essential ecosystem services is being compromised as rising temperatures reduce its oxygen-carrying capacity. The increasing uptake of carbon dioxide is causing ocean acidification, and unprecedented changes in chemical and physical conditions are already impacting the distribution and abundance of marine organisms and ecosystems. The very life of the global ocean, from the smallest phytoplankton to the largest of the great whales, is being impacted. (Global Ocean Commission, The Global Ocean, From Decline to Recovery Summary Report 2014).

Marine life in the high seas soaks up twice as much CO2 from the atmosphere as Canada emits every year, a new study by the Global Ocean Commission revealed in 2014.

Scientists estimate that phytoplankton absorb and bury more than 1.6 billion tonnes of CO2 in the seabed every year. This was news to readers of Canada’s Globe and Mail newspaper’s detailed two-page spread on the Global Ocean Commission report, which failed to mention this vitally important carbon reduction service (or that it is worth an estimated $148 billion a year).

Additionally, if governments ended fishing in the unclaimed oceans beyond 200-mile economic zones, near-shore fish catches would soar, even more carbon would be safely removed from the atmosphere and the oceans would be healthier said co-author of the study Rashid Sumaila of the University of British Columbia’s Fisheries Centre.

“The high seas are like a failed state. Poor governance and the absence of policing and management mean valuable resources are unprotected or being squandered,” said David Miliband, co-chair of the commission and former foreign secretary of the United Kingdom.

Governments like Japan, Spain, the U.S. and China subsidize fishing fleets to destroy the high seas by overfishing and deep-sea bottom trawling to the tune of $152 million a year.

Here’s the kicker: The dollar value of all the fish caught way out there is actually negative when costs like fuel and subsidies are subtracted. Turns out high seas fishing fleets get 25 per cent of their income from subsidies according to a 2009 analysis by Sumaila. “Most would not be fishing the high seas without subsidies,” said Sumaila.

Fishing should be banned in the high seas, which represent 64 per cent of the world’s oceans just to protect and enhance its role as a carbon sponge, he said. But that is just one of 14 other valuable services the high seas provide humanity according to their study, The High Seas And Us: Understanding The Value Of High Seas Ecosystems.

The commission is calling for the negotiation of a new agreement under the UN Convention on the Law of the Sea to prioritize ocean health and resilience and restore ocean productivity. It also called for an elimination of subsidies on high seas fishing within five years.

The commission’s proposals also call for mandatory tracking of all vessels fishing in the high seas, a ban on the transshipment of fish at sea, measures to end plastics pollution and binding standards for the regulation and control of offshore oil and gas exploration and exploitation.

Phytoplankton are the carbon-eating plants of the seas and pass on this carbon when they’re eaten. When organisms die in the deep seas, their organic matter ends up on the bottom of the ocean, which makes for an effective, natural carbon sequestration process.

Fishing is crippling this free carbon-removal system. This is especially true for bottom-trawlers that bulldoze the sea floor scooping up every living thing. Trawling is by far the most common fishing method and recent studies warn it’s destroying corals and the sea bottom leading to “long-term biological desertification.”

Last May, scientists writing in the journal Science called for an end to “the frontier mentality of exploitation” of the high seas and recommended a ban on trawling to protect the carbon-removal service and halt the decline in the productivity of the oceans. The amount of wild fish caught peaked 20 years ago.

About 70 per cent of fish caught inside the 200-mile limits spend some time in the high seas. If the high seas are protected those fish are likely to grow larger and become more numerous, benefitting near-shore fisheries, Sumaila said.

A number of studies of marine protected zones where fishing is banned or very limited show these areas act as baby-fish incubators increasing the overall population of fish.

Given the reality that fishing the high seas is a money loser, even a low carbon price could make a fishing ban valuable, not to mention the other potential benefits of regulating international fisheries. Sumaila said the $148 billion-a-year value of the high seas carbon sponge is a conservative estimate, and it could actually be as high as $222 billion.

Fishing and trawling bans have been proposed before. Last December the European parliament narrowly rejected a bottom-trawling ban on its vessels.

“We need wide public understanding of the vital importance of the high seas to all of us,” concluded Sumaila.

This article is cross-posted from StephenLeahy.net where it was first published under the title High Seas Represent $148 Billion Carbon Sink But Overfishing is Destroying It.
______

Stephen Leahy is an independent environmental journalist and author of a new book Your Water Footprint: The Shocking Facts Behind Our Thirst for Earth’s Most Precious Resource.

He is a professional member of the Society of Environmental Journalists: Fellow, International League of Conservation Writers. He is also a regular international speaker on environmental issues.

He has been published in dozens of publications around the world including National Geographic, New Scientist, The London Sunday Times, The Guardian,  Al Jazeera, Maclean’s Magazine, Earth Island Journal, The Toronto Star, Wired News, Audubon, BBC Wildlife, and Canadian Geographic.