Below 2C
Home Environment Conservation Peak Water. Are We Running Out? 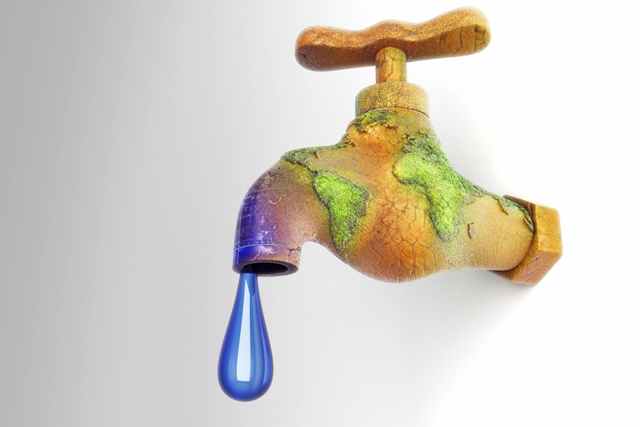 Only 2 percent of all this water is fresh drinking water but most of that is locked up in the polar icecaps and glaciers – approximately 80 percent  (or 1.6 percent of the planet’s water). Another 36 percent is in underground aquifers and wells and roughly 0.036 percent of our fresh water supply is found in lakes and rivers. That still leaves thousands of trillions of gallons for drinking. (Source: Environmental Science, howstuffworks)

But is that enough fresh drinking water for a population which is growing exponentially? Every second, four babies are born and two people die. In the time it will take to write this article, 20,000 people will have joined the human race.

‘Peak Oil’ has been extensively written about for many years “but the real threat to our future is peak water,” wrote Lester R. Brown, president of the Earth Policy Institute, in the summer of 2013 in theguardian. “There are substitutes for oil, but not for water. We can produce food without oil, but not without water.”

“The concept of “peak water” and its implications for the U.S. economy are less well explored and understood.” says Dr. Peter Gleick, President of the Pacific Institute. His April 2010 paper (Peak water limits to freshwater withdrawal and use) sparked such interest that the term “peak water” was chosen by The New York Times as one of their 33 “Words of the Year” for 2010. Gleick outlines three different definitions of “peak water”:

Peak Renewable Water. Most water resources are renewable, in the form of flows of rainfall, rivers, streams, and groundwater basins that are recharged over relatively short time frames. Renewable, however, does not mean unlimited. When human demands for water from a watershed reach 100% of renewable supply, we can’t take any more, and we reach “peak renewable” limits.

For a number of major river basins, we have reached the point of peak renewable water limits, including the Colorado River in the United States. All of the water of the Colorado (indeed, more than 100% of the average flow) is already spoken for through legal agreements with the seven US states and Mexico and in a typical year river flows now often fall to zero before they reach their ends. This is true for a growing number of rivers around the world.

Peak Nonrenewable Water. In some places, water comes from stocks of water that are effectively nonrenewable, such as groundwater aquifers with very slow recharge rates or groundwater systems damaged by compaction or other physical changes in the basin. When the use of water from a groundwater aquifer far exceeds natural recharge rates, this stock of groundwater will be depleted or fall to a level where the cost of extraction exceeds the value of the water when used, very much like oil fields. Continued production of water beyond natural recharge rates will become increasingly difficult and expensive as groundwater levels drop, leading to a peak of production, followed by diminishing withdrawals and use.

This kind of unsustainable groundwater use is already occurring in the Ogallala Aquifer in the Great Plains of the United States, the North China plains, parts of California’s Central Valley, and numerous regions in India. In these basins, extraction may not fall to zero, but current rates of pumping cannot be maintained. Worldwide, a significant fraction of current agricultural production depends on non-renewable groundwater. This is extremely dangerous for the reliability of long-term food supplies.

Peak Ecological Water. Water supports commercial and industrial activity and human health, but it is also fundamental for animals, plants, habitats, and environmentally dependent livelihoods. By some estimates, humans already appropriate almost 50% of all renewable and accessible freshwater flows, leading to significant ecological disruptions…the term “peak ecological water” refers to the point where taking more water for human use leads to ecological disruptions greater than the value that this increased water provides to humans.

Running Out of Water

The story of “Peak Water” is increasingly coming to the forefront in 2014 as large portions of the American mid-west are suffering through the worst drought in the last hundred years. Drinking water supplies from the tap have dried up in many communities forcing authorities to provide bottled-water rations and water for bathing and home use.

Tom Philpott writes in Mother Jones that the water crisis is much worse than previously known. Homeowners and farmers are having to drill deeper wells to harvest dwindling groundwater reserves. California has declared a drought emergency and imposed mandatory restrictions on water use with the levy of heavy fines for wasting water on non-essential activities – watering lawns and driveway, washing cars. National Geographic reports that:

Groundwater supplies in our major western aquifers — the Central Valley, the southern Ogallala and now those that underlie the Colorado River Basin – are disappearing. We simply pump out more water than is being naturally replenished, and as a result, groundwater levels are falling rapidly…..The American West is running out of water.

Of course water scarcity and peak water are not new concepts to the rest of the world. According to the UN Environment Program, more than half of the world’s population will struggle with water shortages by 2030.

The world is now entering a water crisis. There is increasing conflict world-wide for fresh water resources.

Water Use by Sector

According to the Food and Agriculture Organization, irrigation now claims close to 70 percent of all freshwater appropriated for human use.” The remaining water is for direct use by humans for domestic activities and by industry. Better water management strategies – conservation, better irrigation techniques, reducing water usage – will be needed to cope with a world population that has doubled since 1960. The following chart shows the global water use by sector – agricultural, domestic and industrial.

Some of Rolly’s articles have also appeared in newspapers such as The Hill Times and the Kingston Whig.