Below 2C
Home Socio-Politico Canada Tell Your Premier to #ActOnClimate 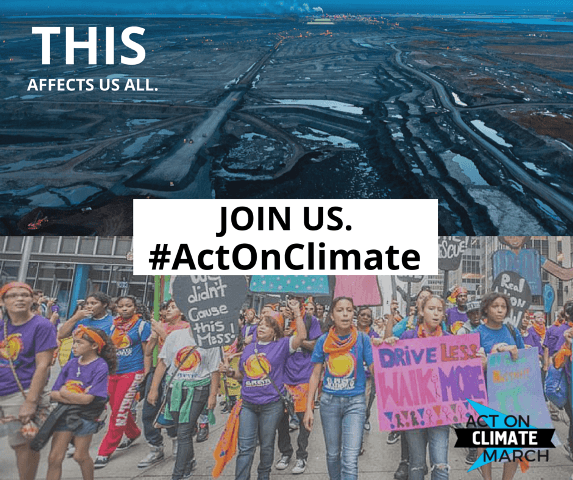 The material in this article is sourced from the ActOnClimate website. (Rolly Montpellier ~ Editor for BoomerWarrior).

On April 14th the heads of Canada’s provinces and territories will meet in Quebec City. Climate change will be the only item on their agenda. It’s time to tell your premier to #ActOnClimate.

Tell Your Premier to #ActOnClimate

2015 is a pivotal year for climate action, full of challenges and urgency, culminating in December’s UN Climate Change Conference in Paris.

Across Canada the mining and transportation of unconventional oil from the tar sands has become a dominant issue. To the west ferocious opposition has stalled the Northern Gateway and Kinder Morgan tar sands pipeline projects in their tracks, while to the east almost half a million dollars has already been raised by community groups preparing to fight Transcanada’s proposed Energy East tar sands pipeline.

Stephen Harper calls these pipeline opponents extremists, but unlike his government they represent the views of a majority of Canadians. A study in the January edition of the journal Nature put our challenge plainly: Canada must leave 85% of the tar sands in the soil in order to help the human race avoid catastrophic climate change.

That means no new tar sands pipelines. No Keystone, no Energy East, no Kinder Morgan, No Northern Gateway. Build even one, and we torpedo our chances of stopping global warming. We stand on the edge of a precipice, and a lack of political will threatens to send us over it.

The Globe and Mail recently asked, “Who’s responsible for climate policy in Canada?” pointing out the enormous climate leadership gap at the national level. Although some Premiers are stepping forward on climate, “Canadians are unhappy with the country’s performance on the climate-change issue, and expect Ottawa, not the provinces, to demonstrate leadership,” reported the Globe and Mail.

Following on the unparalleled success of the Peoples Climate March in September 2014 in New York city and around the globe, the Quebec Act On Climate march has garnered wide attention. Bloomberg Business has called it the “All-in for the climate in Quebec City” march.

Our Premiers need to choose. They cannot protect the climate while supporting extreme energy projects like the tar sands and pipelines that enable them. Make sure they know where you stand.

Tantoo Cardinal is a Metis film and television actress. She reminds us that:

“We must choose this opportunity to weave a new paradigm. Your grandchildren will thank you for it.”