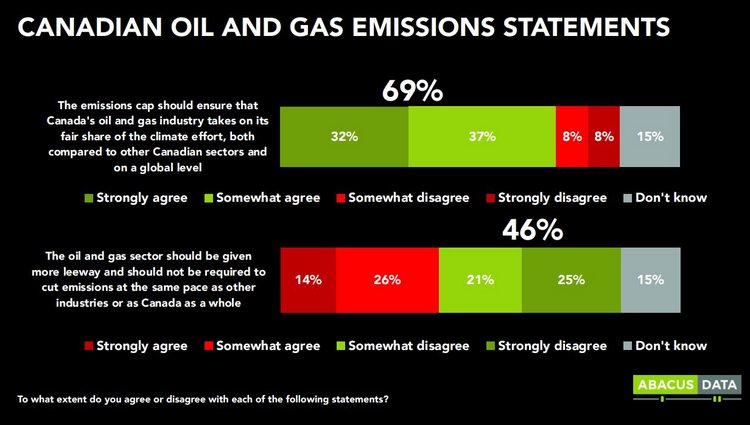 A new poll finds that 70% of Canadians want an oil and gas emissions cap that will ensure industry takes on its fair share of climate action. In its consultation paper, our government invites Canadians to provide feedback on two options for the capping of emissions. But neither option will achieve that.

(The content of this piece is sourced from the Climate Action Network press release.)

With just days left in the federal government’s public consultation on an emissions cap for the oil and gas sector, a new Abacus Data poll released today reveals a strong majority of Canadians believe the cap should ensure the fossil fuel industry takes on its fair share of climate action. The poll also reveals a majority of Canada believe the cap should be rigorous, with no delays or offsets.

Oil and gas companies and the Canadian Association of Petroleum Producers (CAPP) have pushed back against the cap on oil and gas emissions, complaining that it would be too aggressive and unnecessary. But, as this new poll demonstrates, the policy is broadly supported by Canadians.

The Abacus poll shows that 7 in 10 Canadians (69%) say the emissions cap should ensure the oil and gas industry takes on its fair share of climate action, both compared to other Canadian sectors and on a global level.

In every region of Canada….

A majority of people agree the oil and gas industry should do its fair share of climate action, with only 16% of respondents country-wide disagreeing.

Even Alberta sees a majority (59%) support for this.

Youth and older Canadians are especially concerned about fairness, with 68% of 18-to-29-year olds and 74% of people aged 60 and over in support of making the fossil fuel industry do its fair share.

The promise to “cap oil and gas sector emissions today and ensure they decrease tomorrow” was a 2021 platform commitment from Prime Minister Justin Trudeau, reiterated at COP26 in Glasgow. In July, the federal government published a discussion paper on options for the cap and launched an online consultation, closing September 30, 2022.

The oil and gas industry is responsible for 27% of Canada’s emissions, and its emissions shot up by 87% between 1990 and 2019, as other traditionally energy-intensive industries like electricity, heavy industry, and light manufacturing managed to drive down their pollution.

Analysis by Climate Action Network – Réseau action climat (CAN-Rac) illustrates that for the oil and gas industry to take on their fair share of climate action, it must cut emissions by 60% from 2005 levels by 2030. Canada’s Emissions Reduction Plan projects a decrease in oil and gas emissions of only 31% by 2030 – barely half of its fair share, and significantly below Canada’s national target of 40-45% emissions reductions by 2030.

“Right now, oil and gas executives are raking in windfall profits, as families across Canada struggle to make ends meet because of fossilflation,” said Caroline Brouillette, National Policy Director at CAN-Rac. “This industry is perfectly positioned to invest in curbing their emissions. For the industry to try to escape responsibility and continue polluting without limit is an insult to the Canadians from coast to coast suffering from flooding damage and wildfires, smoky air and heat exhaustion.”

Yet another appeal from António Guterres

In  a blistering speech to the United Nations General Assembly on Tuesday, Secretary-General António Guterres called out the fossil fuel industry for “feasting on hundreds of billions of dollars in subsidies and windfall profits while household budgets shrink and our planet burns,” and demanded an intervention in the world’s fossil fuel addiction.

Overall, the poll found a majority support the cap: 6 in 10 Canadians (58%) support a cap on emissions from the oil and gas industry.

In every region across the country outside of Alberta, more people support than oppose a limit on emissions from the oil and gas sector; in Alberta, as many support as oppose the cap. Support rises to 66% in Quebec, 63% in British Columbia and 62% in the Atlantic provinces.

The cap is especially popular among youth, with 65% of Canadians aged 18-29 in support.

Liberal and Bloc Québecois voters are particularly enthusiastic about the emissions cap, with nearly 8 in 10 (79% and 78% respectively) in support, as well as 72% of NDP voters.

A key factor that will determine whether the policy succeeds at significantly cutting emissions will be whether the government implements rigorous regulations, or whether it caves to industry pressure and allows for loopholes, delays, and offsets (allowing industry to purchase credits from other sectors or countries rather than having to make real emissions cuts within the sector).

A majority of Canadians (55%) say the emissions cap should not allow companies to delay compliance with regulations or buy their way out through offsets.

66% of Atlantic Canadians and 64% of Quebecers support greater rigour over flexibility for industry.

A majority of both NDP and Liberal voters believe the cap should be rigorous (70% and 59% respectively), as well as 83% of Bloc Québecois voters.

Sven Biggs, Canadian Oil and Gas Program Director, Stand.earth, said: “This poll shows that Canadians are fed up with Big Oil refusing to do their fair share to address climate change…For far too long the Big Oil lobby has set the agenda in Ottawa, it’s time for our government to stand up to them and draw a line in tar sands.”

Jesse Whattam, digital campaigner at Leadnow, said: “For years, the oil and gas industry has made massive profits from perpetuating climate destruction. Now, as communities face disaster after disaster, big oil wants to put the burden of cleaning up the mess they made on ordinary Canadians. It’s a slap in the face.”

ICYMI:
Framing Climate Action as “Economic Readiness” Is Best
Prime Minister Trudeau: Put a Hard Cap on Oil and Gas Emissions
The Man Who Could Be Climate King