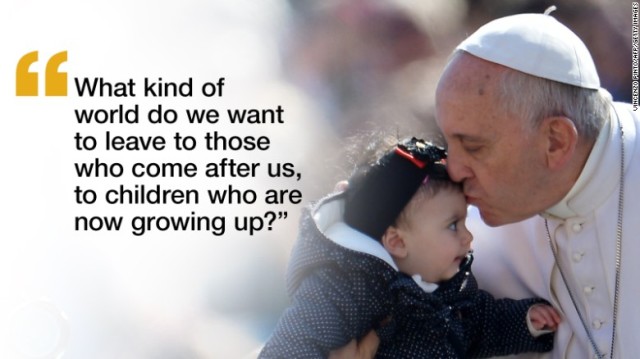 The central message of Pope Francis’ latest encyclical letter on Climate and the Environment is “Care for our Common Home“. The letter is the foundation of the Pope’s mission on climate.

Mark Dunlea of the 350.Org Local Group Leaders has shared his summary of quotations from the Pope’s Encyclical Letter.

The letter is a comprehensive overview of not just climate change but of the role of humanity in acting as stewards of our environment, which includes the poor. It cites the shortcoming of our political and economic leaders and systems and the weak response by them so far to climate change. It is very strong in recognizing the right of other beings and reject the notion that man has the right to exploit and dominate nature.

“Climate change is a global problem with grave implications: environmental, social, economic, political and for the distribution of goods. It represents one of the principal challenges facing humanity in our day. It’s worst impact will probably be felt by developing countries in coming decades,” the Pope said.

I urgently appeal, then, for a new dialogue about how we are shaping the future of our planet. We need a conversation which includes everyone, since the environmental challenge we are undergoing, and its human roots, concern and affect us all.

1. Humans  Are the Problem

Never have we so hurt and mistreated our common home as we have in the last two hundred years.

The climate is a common good, belonging to all and meant for all. At the global level, it is a complex system linked to many of the essential conditions for human life. A very solid scientific consensus indicates that we are presently witnessing a disturbing warming of the climatic system.

Each com­munity can take from the bounty of the earth whatever it needs for subsistence, but it also has the duty to protect the earth and to ensure its fruitfulness for coming generations.

The Earth, our home, is beginning to look more and more like an immense pile of filth. In many parts of the planet, the elderly lament that once beautiful landscapes are now covered with rubbish.

2. The Inaction on Climate by World Leaders is Indefensible

It is remarkable how weak international political responses have been.  There are too many special interests, and economic interests easily end up trumping the common good and manipulating information so that their own plans will not be affected.

The alliance between the economy and technology ends up sidelining anything unrelated to its immediate interests. The econ­omy accepts every advance in technology with a view to profit, without concern for its poten­tially negative impact on human beings. Finance overwhelms the real economy.

The failure of global summits on the environment make it plain that our politics are subject to technology and finance. Consequently the most one can expect is superficial rhetoric, sporadic acts of philanthropy and perfunctory expressions of concern for the environment, whereas any genuine attempt by groups within society to introduce change is viewed as a nuisance based on romantic illusions or an obstacle to be circumvented.

The idea of infinite or unlimited growth, which proves so attractive to economists, financiers and experts in technology … is based on the lie that there is an infinite supply of the earth’s goods, and this leads to the planet being squeezed dry at every limit.

3. Fossil Fuels Must be Eliminated

There is an urgent need to develop policies so that, in the next few years, the emission of carbon dioxide and other highly polluting gases can be drastically reduced, for example, substituting for fossil fuels and developing sources of renewable energy. Worldwide there is minimal access to clean and renewable energy.

We know that technology based on the use of highly polluting fossil fuels – especially coal, but also oil and, to a lesser degree, gas – needs to be progressively replaced without delay…. Politics and business have been slow to react in a way commensurate with the urgency of the challenges facing our world.

Reducing greenhouse gases requires honesty, courage and responsibility, above all on the part of those countries which are more powerful and pollute the most…the countries which have benefited from a high degree of industrialization, at the cost of enormous emissions of greenhouse gases, have a greater responsibility for providing a solution to the problems they have caused.

Many things have to change course, but it is we human beings above all who need to change. We lack an awareness of our common origin, of our mutual belonging, and of a future to be shared with everyone.”

Doomsday predictions can no longer be met with irony or disdain. We may well be leaving to coming generations debris, desolation and filth. The pace of consumption, waste and environmental change has so stretched the planet’s capacity that our contemporary lifestyle, unsustainable as it is, can only precipitate catastrophes, such as those which even now periodically occur in different areas of the world. The effects of the present imbalance can only be reduced by our decisive action, here and now.

5. Especially Detrimental to the Poor

Pope Francis believes that “all is not lost. Human beings, while capable of the worst, are also capable of rising above themselves, choosing again what is good, and making a new start.”

Although the post-industrial period may well be remembered as one of the most irresponsible in history, nonetheless there is reason to hope that humanity at the dawn of the twenty-first century will be remembered for having generously shouldered its grave responsibilities.”