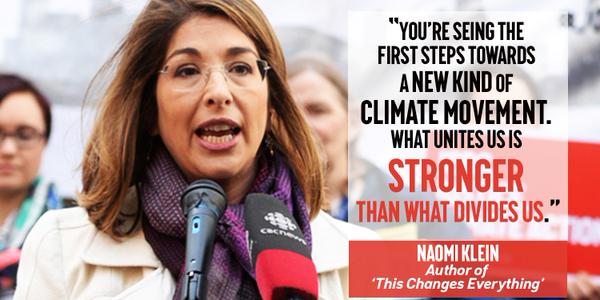 Canada’s new climate movement continues to build after the initial Quebec #ActOnClimate march. 350 Ottawa was there. On July 5, 350 Ottawa will again join thousands of people on a march for #JobsJusticeClimate on the streets of Toronto. The march will tell the story of a climate movement that works for people and the planet.

We’ll be forming a 350 Canada contingent for the March and we invite you to come along. It’s a great opportunity to stand in solidarity with the many diverse groups and individuals across Canada saying no to fossil fuels and yes to a clean energy future. Plus, you’ll get a chance to meet other 350 Canada supporters.

It starts with justice, creates good work, clean jobs and healthy communities, recognizes that we have solutions and shows we know who is responsible for causing the climate crisis.

From Alberta to the coasts, Canada is ready for an economy that creates good jobs for all, protects the air, land and water, and tackles climate change. Canadians are joining the new climate movement by the thousands.

We don’t have to choose between the economy or the environment. By taking climate action, we can create an economy that is more fair and equal and generates hundreds of thousands of good green jobs. It means supporting the labour that takes care of people and the planet — education, healthcare, childcare and the protection of the land, much of it done by women. It means expanding localized agricultural systems to use less fossil fuels and provide affordable, nutritious food for everyone in Canada.

We want an economy in which workers earn a living wage – starting with a $15 minimum – and which prioritizes people who are unemployed, struggling in precarious, temporary, or non-unionized jobs or in industries being shut down. Which honours Indigenous peoples’ rights and recognizes their role in protecting the land, air and water for everyone. Which guarantees migrant and undocumented people are not excluded and receive full immigration status. Which ensures that black and brown lives matter as much as white ones and are free of racism and police violence. Which respects the limits of the environment made clear by climate science.

This July, Toronto will host a Climate Summit of the Americas and an Economic Summit, where politicians will face a choice: listen to corporate leaders from across the Americas gathering to advance an economic austerity agenda that is increasing inequality and causing a climate crisis felt disproportionally in the global south – or listen to the people.

On the eve of those summits, let’s make sure they hear our demands:  a justice-based transition to a new energy economy, in which corporate polluters pay and ordinary people benefit.

The only way to overcome a small, powerful group who have a lot to lose is to build a massive movement of people with everything to gain.

On Sunday July 5, join us the March for Jobs, Justice & the Climate in the streets of Toronto.

Tyler Blanchett is the Bus Captain for transportation from Ottawa to Toronto via Kingston.

In 12 Days join a new kind of #climate movement at #JobsJusticeClimate in #TO via #Ottawaeventshttp://t.co/iLAwpy0HOM#Onpoli#sustainable

The March for #JobsJusticeClimate is just two weeks away. Join us at 1pm @ Queen’s Park on July 5th in #Toronto. pic.twitter.com/ctzm9gVbFi

Please join us! Click here for the Jobs, Justice and the Climate 350 Ottawa Bus and bring some friends.

See you soon at the March! Together, we will build a better, cleaner tomorrow.

The March Starts at: