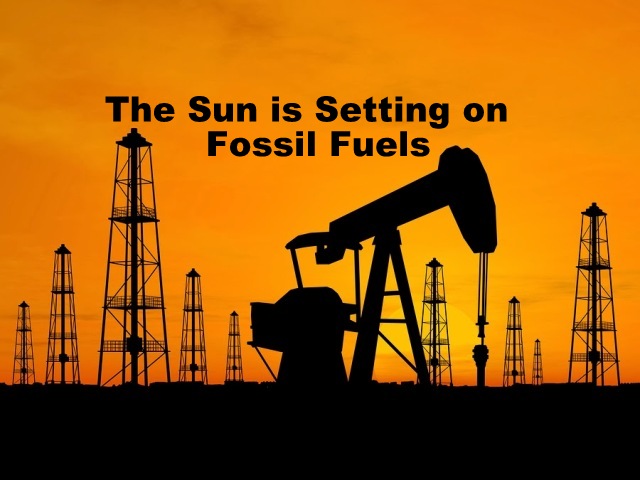 ‘Shifting goalposts’ is the title of one of the chapters of The Carbon Bubble, What Happens to Us When it Bursts, authored by Jeff Rubin. Rubin is a prolific author and former Chief Economist at CIBC World Markets. (Rolly Montpellier, Editor for BoomerWarrior).

Our whole world depends on burning carbon. We’ve been burning massive amounts of carbon since the Industrial Revolution. “Although we didn’t realize it at the time, we were on a budget,” says Jeff Rubin:

All of the carbon we’ve already emitted into the atmosphere is soon going to force us to find another way to power our economies. For the first time since the Industrial Revolution, we are going to have to adapt to burning less fossil fuels as opposed to always burning more.

We’ve done very well at avoiding and ignoring the obvious warning signs from a rapidly warming planet. Since 1880 the planet’s surface temperature has warmed by 0.85°C.  2015 is well on its way of becoming the hottest year ever, topping 2014 as the warmest year on record. Much of this warming is caused by the increase of atmospheric carbon – from 280 parts per million (ppm) in pre-industrial times to over 400 ppm at the present.

The Point of No Return

According to the Intergovernmental Panel on Climate Change (IPCC), the point of no return is 450 ppm and anything above that will breach the previously agreed-to target of 2°C. The Earth has already warmed by 0.85°C. and climate scientists argue that we are now on track for warming well beyond the 2°C limit. The required reduction in carbon emissions to keep the world below 450 ppm is essential for the survival of natural systems, animal species and humankind. This will require drastic changes in the world’s energy systems.

Only three years ago, investors in coal stocks went to sleep every night confident that rapid coal-fired economic growth would continue forever and that seriously reducing carbon emissions would be so prohibitively expensive to our economies that no country could afford to take action…..Recently, however, those investors woke up to a nightmare. (Jeff Rubin, The Carbon Bubble).

The coal industry did not anticipate that individual countries would act unilaterally to combat carbon emissions domestically, in the absence of any global action on climate change.

In the US, the demand for coal is expected to go from bad to worse.

Technological and policy changes have combined to crush coal consumption… in the electric power sector by almost 20 percent between 2008 and 2013… President Obama has used his executive powers to mandate emissions controls through the EPA that effectively preclude new coal-fired plants from being built….More recently, he has targeted a 30 percent reduction in emissions from power plants over the next decade and a half…over 90 percent of coal burned in the US economy is used by power stations. (Jeff Rubin, The Carbon Bubble).

Most of China’s pollution is from carbon emissions, predominantly the burning of coal. Environmental horror stories abound. Airports have been closed because of lack of visibility, school children have been kept indoors, urban dwellers routinely wear masks outside, agricultural soils are contaminated. Surprisingly the Chinese government has reacted with strong pollution control measures with an iron fist.

In November of 2014, President Obama and Chinese President Xi Jinping signed a carbon agreement pledging both countries to emissions reduction targets a full year ahead of the Paris COP21 climate talks. Just days ago, the two Presidents released a Joint Presidential Statement on Climate Change reaffirming their full commitment to a new era of multilateral climate diplomacy.

The potential impact of China’s changing approach to emissions cannot be overstated…The fact that the world’s two largest emitters have entered into direct bilateral discussions on carbon management is a game-changer. (Jeff Rubin, The Carbon Bubble).

Coal production around the world is in steep decline. Not only is climate change being taken more seriously, but sluggish world economies have resulted in slower economic growth. China’s spectacular double-digit annual rates of growth are over. The latest statistics show that China’s energy-related carbon emissions did not grow in 2014 driven primarily by a decline of 2.9 percent in coal consumption. That trend is deepening in 2015 with a further decline in coal use.

India, the third highest carbon emitter behind China and the United States, is the latest country to submit its Intended Nationally Determined Contributions (INDCs). India’s INDC is said to be inspired by Muhatma Gandhi’s declaration, “Earth has enough resources to meet people’s needs, but will never have enough to satisfy people’s greed.”

Coal mines are shutting down all over the globe as coal prices have tumbled from $140US (2011) to betweem $60-70 US per metric ton. InsideClimate News says it well, “if coal were a medical patient, its prognosis would be creeping toward the critical list.”

So if coal is saying its long goodbye, could oil suffer the same fate? Yes! World oil prices have dropped dramatically from triple-digit pricing in 2011 and are now hovering at less than US$50 – a 60 percent drop. There’s a two-prong concern over oil. First there’s the huge collapse of prices affecting revenues for oil companies, and secondly, extraction and exploration costs for unconventional hard-to-get oil deposits have soared.

Many in the oil patch fear that this is no ordinary downturn. The commitment by world nations to setting emissions reduction targets for the COP21 Paris summit is just the beginning. To date, 86 our of 190 participating the the COP21 Paris climate talks have submitted their carbon emission reduction goals which are meant to hold world leaders accountable to prevent global warming from surpassing the 2°C.

“Just as environmental goalposts have shifted radically for coal producers, they may soon shift just as decisively for oil,” says Rubin. There’s also the very sobering realization that the world must eliminate its addiction to fossil fuels almost entirely in order for future generations to survive on an increasingly crowded Earth.