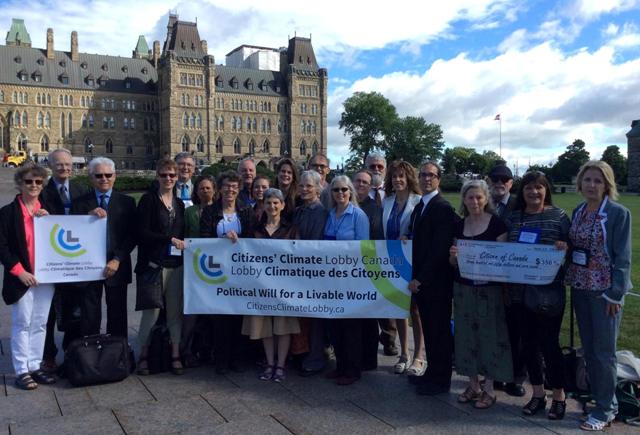 Citizens’ Climate Lobby (CCL) advocates for a national carbon pricing policy for Canada. The preferred pricing mechanism is Carbon Fee and Dividend. Fee and Dividend is revenue-neutral, politically astute, efficient and easy to administer. The following Laser Talk —  Guidelines for Canada’s Carbon Pricing Policy —  has been drafted to share with politicians and their office staff as well as the general public. (Rolly Montpellier~Editor for BoomerWarrior).

When the new federal government came to power last October, they retained the former government’s inadequate greenhouse gas (GHG) emissions target [1] [2] with the promise that the Prime Minister and the Premiers would work out a pan-Canadian plan within 90 days of the Paris COP21. On March 3, the First Ministers issued the Vancouver Declaration on Clean Growth and Climate Change — which agreed to principles and a framework for a plan to meet or exceed the current emissions target.[3]

Among other things, they agreed to using carbon pricing mechanisms to facilitate the transition to a low carbon economy. A working group is exploring options and will submit recommendations in September 2016. Implementation is scheduled to take place in early 2017.

Canada, however, is a complicated federation. The provincial economies are all uniquely different: some are more resource-based while others are more geographically dispersed and some are much larger than others. Hence, assembling a comprehensive national carbon-pricing system will clearly be a challenge.

The risk is that interprovincial negotiations over the costs and benefits of this climate action plan may be cited as the reason – or perhaps offered as an excuse – for intransigence and further inaction in reducing GHG emissions. Meanwhile, the threat posed by climate change becomes clearer with each passing season, and every year of delay increases the risk of hitting irreversible tipping points.

It’s time for both Ottawa and the provinces to work together on an ambitious plan to significantly reduce our GHG emissions. This is an important shared responsibility.

The Paris Agreement commitment to reduce emissions by 30 percent by 2030 requires a bold climate action plan that begins with an aggressive national carbon pricing strategy. Image credit: Ministry of the Environment and Climate Change

While details for a pan-Canadian climate plan are being worked out, CCL will be lobbying for fair and effective carbon pricing. Below are guidelines for what we consider acceptable:

[4] Economic modelling by Navius Research shows that a price of $100/tonne by 2030 is not enough to meet the current target of 524 Mt CO2e in 2030, suggesting a larger carbon price is necessary, especially since the current target is inadequate for Canada’s fair-share contribution to the Paris agreement.  See figure 7 in: http://ecofiscal.ca/wp-content/uploads/2016/04/Ecofiscal-Commission-Choose-Wisely-Carbon-Pricing-Revenue-Recycling-Report-April-2016.pdf  The suggested price of $30 a tonne in 2018, rising by $10 a tonne per year, will reach $150 in 2030.