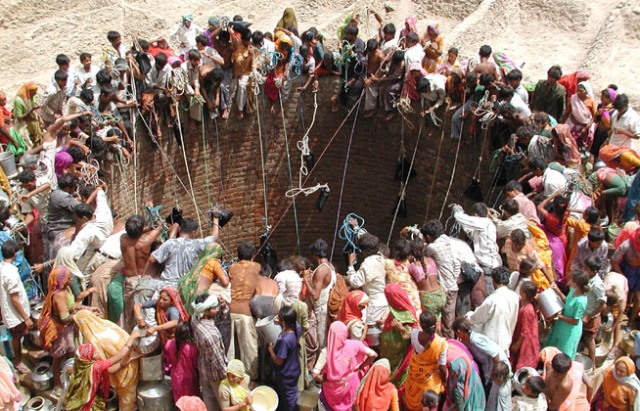 Our planet has entered a new era. The era of climate consequences is upon us. Climate-related events and extreme weather are dominating the news. The impacts of global warming are all around us – droughts, wildfires, floods, melting ice, rising sea levels, natural disasters. The landscape is irreversibly changing.

Era of Climate Consequences in Pictures

Droughts: India endures the effects of one of the worst droughts in its history. At least 330 million people are suffering from scarce drinking water. India set a new heat record when the city of Rajasthan saw 51 degrees Celsius (123.8 degrees Fahrenheit). Temperatures have exceeded 40 degrees Celsius for several weeks in a row.

Floods: In Paris, the Seine river rose above its embankments peaking at over 6 metres, the highest level in decades. Unusually heavy rains caused severe flooding across central and northern France as well as parts of Germany, Belgium and Romania.

Forest Fires: “This [Fort McMurray fire] is consistent with what we expect from human-caused climate change affecting our fire regime,” Mike Flannigan, a wildfire researcher at the University of Alberta, said. According to Flannigan, the fire season starts earlier and lasts longer than it did a few decades ago. The fire which began on May 1 has destroyed over 2,400 homes and forced the evacuation of over 80,000 people.

Arctic ice melting: Polar bears need sea ice to hunt their main prey, seals. Western fjords of Svalbard which normally freeze in winter, remained ice free all season during the winter of 2012/13, one of the worst on record for sea ice around the island archipelago. This bear headed hundreds of miles north, looking for suitable sea ice to hunt on before it finally collapsed and died. (Source: theguardian).

A male polar bear that starved to death as a consequence of climate change. Photo credit: Ashley Cooper, Images From a Warming Planet

Global atmospheric carbon dioxide concentration first crossed over the 400 parts per million threshold in 2013, but now, scientists are speculating that we may have entered an era when the global concentration remains permanently over that mark — an event some scientists are seeing as a point of no return. (Source: Dahr Jamail, Truthout).

Heavy use of coal in a slum in Suihua, Heilongjiang, (China) pumps out smoke into an already highly polluted atmosphere. Credit: Ashley Cooper, Images From a Warming Planet