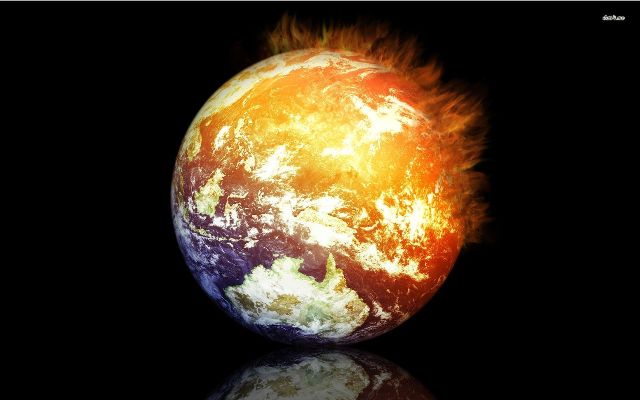 Earth is warming at an unprecedented pace. Climate change is destroying our planet. And the evidence is all around us. In spite of the media’s sparse coverage of global warming, we are confronted daily with cursory reports about extreme weather events, dying coral reefs, the Zika virus, climate refugees, floods, wildfires, droughts, disappearing Arctic ice and more and more and more. The warming onslaught is visible. And it seems to be unstoppable.

How Climate Change is Destroying Our Planet

Even if the 195 signatories to the Paris Agreement comply with their stated targets for emissions reductions, the world will still heat up by as much as 3.5 degrees Celsius by 2100 — not the 1.5 to 2 degrees Celsius promised in the pact.

In a recent article, Bill McKibben uses the war-metaphor to focus our attention on  the global warming challenge.

By most of the ways we measure wars, climate change is the real deal: Carbon and methane are seizing physical territory, sowing havoc and panic, racking up casualties, and even destabilizing governments. (Bill McKibben).

We have known for decades that this day would come. The warming of the planet is speeding up with 14 consecutive months of record-breaking temperatures. Half measures will no longer work. The Paris Agreement is already inadequate.

The question is not, are we in a world war? The question is, will we fight back? And if we do, can we actually defeat an enemy as powerful and inexorable as the laws of physics?  (Bill McKibben).