Below 2C
Home Environment Conservation The Story of a Plastic Spoon

Most of us have often used a plastic spoon. And we really never question its origins. The video featured in this post traces the evolution of the plastic spoon from its very beginnings some 4.5 billion years ago to the time you hold it in your hand. It’s meant as a spoof on our addiction to plastic.

The Story of a Plastic Spoon

4.5 billion years ago,
A giant molecular cloud collapses in space setting free a solar nebula out of which a planet is born,
Earth.
For 2 billion years this planet evolves and first life appears.
A soup of cells, bacteria, algae, funghi,
And a myriad of plants come to life.
Fish reign the oceans and eat the algae.
They absorb the sunlight and store it in their bodies.
Dinosaurs, amphibians, reptiles. Birds and mammals.
They all live and die.
And each year, the dead bodies are covered by layers and layers of sediment.
Heat and pressure rise, turning them into yellow-black liquid: Oil.
Humans arrive, and with them, geologists.
They study for years to find the oil and build rigs in remote places.
Giant pumps extract the liquid and it’s shipped across the oceans.
A refinery cracks it open and once again it travels.
A factory then binds the compounds and turns them into plastic pellets.
Stored in big containers, around the world they go.
Liquefied, they’re molded into the shape of a beautiful spoon which cools off to harden.
Wrapped in plastic, it is put into a box.
And the box is put on a pallet.
And the pallet is put into a container.
And the container is put on a truck.
The truck drives to a port where the container is put on a ship.
And ship, ship, ship, the spoon arrives 6,000 kilometres around the world.
It’s picked up by a merchant who puts it on a truck and drives it to a store where’s its placed on a shelf.
It sits for two months until you select it and pay for it with the money you’ve worked hard for.
And you drive the spoon home, which is where you’re standing right now.
With the spoon in your hand.

Now do you think it’s too much effort to use a metal spoon that you just have to….. wash?
Thank you to Everyone Who Washed a Spoon Today. (Greenpeace).

Source: transcript from the video 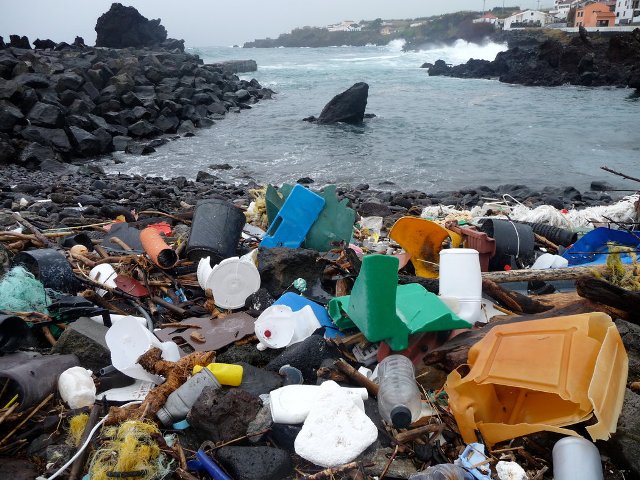 Credit: Marcus Eriksen, plastic debris washed up on a beach in Azores, Portugal.