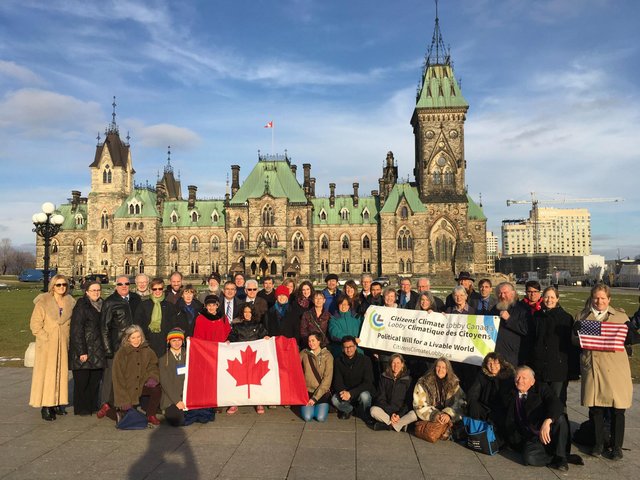 This article is a reproduction (with permission) of a Laser Talk produced by Citizens’ Climate Lobby (Canada). The post highlights revenue-neutral carbon pricing as the clear winner. CCL offers a series of Laser Talks designed as tools for members to use in their lobbying efforts across North America. (Rolly Montpellier, Editor for Below2°C).

In 2018, Canada will establish a floor price on carbon pollution of $10/tonne, rising to $50/tonne by 2022. The federal government will provide a carbon pricing system for provinces and territories that do not adopt their own systems.

For the carbon price to reduce emissions significantly, it must continue to rise past 2022 and reach at least $150/tonne by 2030 [1].  A simple projection by CCL Canada members shows this could increase the cost of living throughout most of the 2030’s to approximately $2,000 per person per year [2].

Why Revenue Neutral Carbon Pricing Is The Clear Winner

There are already rumblings of a populist revolt over the cost of cap and trade in Ontario, estimated to be about $140 per person per year [3]. Imagine the outcry at $2,000. The clear lesson is that high carbon prices will impose unacceptable costs on consumers. CCL has always proposed offsetting these carbon pricing costs with dividends to households, i.e. being revenue neutral.

However, others have opposed revenue neutrality [4]. They want the government to invest the revenue in various ways to help the transformation to a low-carbon economy [5].  They ask, “Where else will the investment money come from?” The simple answer is that higher fossil fuel costs will spur the investment needed for this transformation much more efficiently than would government spending.

A high carbon tax will stimulate the revenue stream for low carbon options because their competition (fossil fuels) becomes costlier. This creates attractive private and public investment opportunities resulting in loans being approved and capital being redirected (e.g. from new fossil infrastructure). This will also mobilize currently under-utilized resources – labour and capital – thereby creating wealth and distributing it more widely. The massive infrastructure transformation needed will require the participation of more than just the government.

The dividends to households will provide significant new income for the poor and disadvantaged.  This will serve social justice and stimulate the economy. For example, cash-poor homeowners could better afford to weatherize.

Increased carbon costs will hurt the poor most (since they spend a large fraction of their income on bare necessities), while dividends will benefit the poor most because they consume fewer carbon-intensive goods and services.

It Can Drive the Clean Energy Transition

In conclusion, a revenue-neutral carbon pricing scheme will spur investment needed for the transition to a low carbon economy through price signals, which redirect investments in the public and private sectors, and by providing consumers with funds to invest in their own energy improvement upgrades.

What is required from the government is the long-term commitment to rising carbon fees. That is why CCL advocates for a national and revenue neutral carbon fee, rising predictably to $150/tonne by 2030.

See other Laser Talks: “Why we want 100% revenue neutrality”, “Balancing the Budget, Social Concerns and the Environment” and “A Clear Market Signal Will Spur Investment”.

[1] Economic modeling by Navius Research shows that a price of $100/tonne by 2030 is not enough to meet the current target of 524 Mt CO2e in 2030,. Fig. in: http://ecofiscal.ca/wp-content/uploads/2016/04/Ecofiscal-Commission-Choose-Wisely-Carbon-Pricing-Revenue-Recycling-Report-April-2016.pdf