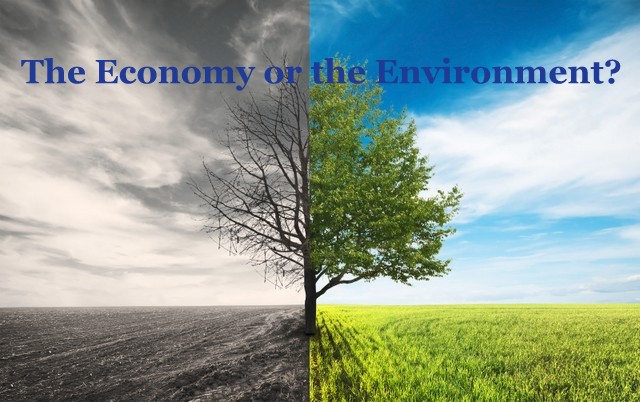 Opposition to the Kinder Morgan pipeline will continue to dominate climate politics until at least the October 2019 federal election. The latest twist involves the use of taxpayer dollars to mitigate Kinder Morgan’s financial risks. With this decision, the Trudeau government  is living up to its perverse notion that the environment and the economy go together. But when the economy means fossil fuels, they DO NOT.

In a recent blog post, Andrea Harnden shows how Environment and Climate Change Minister McKenna is playing a game of political chess. (First published in Council of Canadians blog – featured here with permission).

The Environment and the Economy DO NOT Go Together

McKenna is trying to champion a ‘reasonable’ political middle ground between ‘protestors’ on the one hand and industry on the other, advocating that the environment and economy go hand in hand. This was on full display in her recent interview with the popular CBC radio show, the Sunday Edition.

How is McKenna making this argument with a straight face?

It’s a bit of a shell game, really.

It involves uplifting an insufficient 100MT tar sands ‘hard cap,’ underplaying the gap between the Canada’s 2030 target and existing plans, banking on promises of future (unknown to the public) federal action, allowing climate pollution reductions in California to count towards our target and ignoring the broader context of exporting climate pollution. 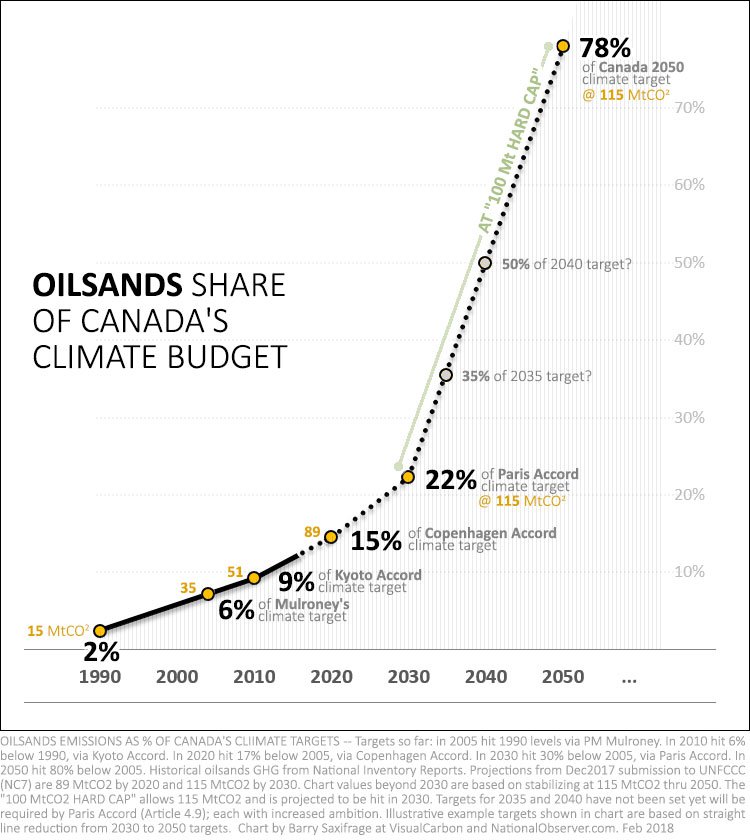 The proposed 100MTCO2 ‘hard cap’ on tar sands, or oil sands production allows production to grow 47.5MT above 2014 levels. By 2030, this cap would allow the tar sands to constitute around 22 per cent of the budget of climate pollution we have for the entire country.

That may not sound alarming at first, but let’s unpack it. This means the tar sands would be 22 per cent of the allowance (or carbon budget) of climate pollution for the entire country, for every sector. From the climate pollution of other industries, to driving cars and trucks to the agriculture sector – everything. By 2050, production under the cap is estimated to account for a whopping 78 per cent of the target.

Furthermore (as reported recently in the National Observer) the cap actually has significant loopholes, enough to fit in the entire climate pollution of Nova Scotia. [There are six loopholes, and more are being sought].

Gap between 2030 target and climate plans just got bigger

In his recent blog, Keith Stewart of Greenpeace Canada highlights that the gap between the reductions promised under the Paris climate agreement and current and planned policies has gone from 44 megatonnes (MT) to 66 MT. To put this in perspective, our 2030 target aims to reduce climate pollution to 517 MT.

McKenna explains this is due to anticipated emissions from the oil and gas industry and demographic growth. I agree with Keith that, given there is unlikely to be dramatic changes in demographics over the last two years, this is primarily due to the oil and gas sector. The tar sands are a driving force of Canada’s oil and gas sector and the fastest growing source of climate pollution. Pipeline approvals that facilitate expansion are absolutely an important factor here.

The federal plan also relies on 53 MT of climate pollution reductions outside of Canada, in California, as part of the Western Climate Initiative that BC, Ontario and Quebec are part of. The Council of Canadians has been critical of carbon offsetting noting it takes pressure off domestic action, the poor track record of the world’s largest market, the European Trading Scheme which was gamed and undermined, and opposition raised by Indigenous allies around displacement and international offsets.

McKenna insists that existing and yet to be announced plans will address it, restating that the government remains committed to the 2030 target.

Frankly, I feel far from reassured when considering the history of promises versus climate action on the part of successive federal Liberal and Conservative governments.

Suggesting that new oil pipelines can help pay for the transition off fossil fuels (a statement made by McKenna, Carr and Trudeau) is akin to an all poutine diet to lose weight.

This should be common sense.

This is where international efforts on climate change fall short, including the Paris climate agreement. While things are shifting (take for example the Lofoten Declaration), for far too long climate action has been interpreted as reducing climate pollution within borders with little to no thought on the impacts of exports in driving up pollution elsewhere. This has allowed oil exporters like Canada off the hook. The significant pollution associated with combusting the oil from the tar sands becomes the importer’s responsibility. For example. Canada extracts far more oil than it burns, around twice as much.

Canadian Centre for Policy Alternatives’ Marc Lee calls this the ‘green paradox’ and points out that it is actually creating an incentive for countries like Canada to “…extract fossil fuels now before their value evaporates.”

At the front lines of opposition to the approval of the Kinder Morgan pipeline are Indigenous nations and leaders asserting their fundamental rights to protect their land and water — growing grassroots resistance and legal action. There are very legitimate concerns around the threat of a large diluted bitumen spill in waterways or the Burrard Inlet. There are criticisms of the unfair and insufficient process that approved the pipeline under the National Energy Board that persist despite the interim measures brought in by the federal Liberals.

While the Kinder Morgan pipeline’s contribution to climate change is certainly not the only reason the project is being fought, it remains a critical one. Thankfully those involved in opposition are seeing past the political maneuvering and are recognizing that a pipeline with a typical lifespan of at least 40 years is inconsistent with meaningful climate action.

There can be no credible climate action that also encourages Tar Sands and pipeline expansion. RMontpellier~Below2°C

Can the Environment and the Economy Go Together?

Countries which are serious about meeting their Paris commitments and transitioning to a low carbon economy are taking more progressive steps by framing their climate action plans around a clean energy future. And where this is happening, the environment and the economy can both prosper, they can go together. But not in Canada. Not with Justin Trudeau as Prime Minister.