Below 2C
Home Climate Climate Impact What Do A Speeding Train and GHG Emissions Have In Common?

What does a speeding freight train have in common with GHGs — greenhouse gas emissions? Three things. First: they are both out of control. Second: unless we can put the brakes on, it doesn’t end well. Third: the eventual outcome will be catastrophic and irreversible. 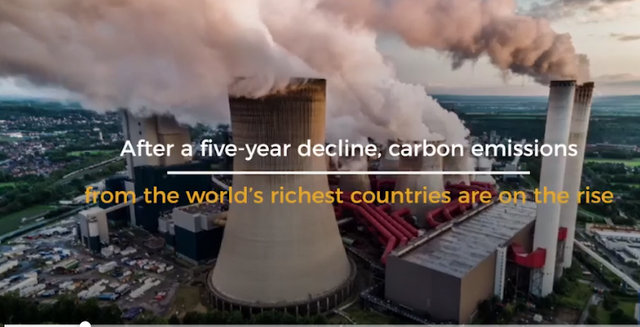 Global greenhouse gases are accelerating at an alarming rate in 2018. According to new research, “the challenge of keeping global average temperatures below 2 °C –even more so—1.5 °C (IPCC 2018),” is mounting. “After a three-year hiatus with stable global emissions, ….CO2 emissions grew by 1.6% in 2017….and are expected to grow a further 2.7% in 2018.”

More specifically, the findings show that a record 37.1 billion metric tons of CO2 will have been dumped into our atmosphere by year’s end. Now just let that sink in for a few seconds. The biggest rises are in India and China projected to increase by 6.3% and 4.7% respectively by the end of 2018. These findings were announced at the COP24 climate conference happening in Poland, a country strongly criticized for its controversial commitment to dirty coal.

Ironically, the UN’s COP24 is sponsored by the Polish coal sector.

There is a cloud hanging over the COP24. And the cloud is coal dust reports Grist. The Grist headline reads This year’s U.N. climate talks – brought to you by coal?. And to make it completely insane, there are booths at the event that display coal earrings, coal necklaces, coal soap bars. Coal is everywhere. The conference even highlights a coal miners’ band to entertain participants. In keeping with the theme of coal, surely the band will do its rendition of Barry McGuire’s Eve of destruction.

A climate conference, where the coal sector is at the table and also sponsoring the event, calls into question the legitimacy and seriousness the COP climate talks. It’s an insult to anyone who cares about the planet.

Polish President Andrzej Duda openly promotes coal at the conference by telling participants that it “does not contradict the protection of the climate.” Poland is sitting on enough coal reserves to last over 200 years.

We are in Deep Trouble

This has prompted UN Secretary-General António Guterres to lay out the cold facts facing the world. “We are in trouble. We are in deep trouble with climate change,” he said. These are some of the facts he made clear:

The goal of the Paris Agreement is to limit global warming to less than 2 degrees Celsius compared to the pre-industrial age. Beyond that threshold, the world will suffer the harshest consequences of a rapidly warming planet and much sooner than ever expected. And sadly, that is precisely the disastrous track the world is currently on. We are Thelma and Louise heading toward the Grand Canyon.

The goal of COP24 (referred to by some as Paris Agreement 2.0) is for the 200 countries committed to the agreement to hammer out the rulebook for the implementation of the Accord, including the monitoring of each country’s emissions. In all some 28,000 people — 13,000 from the parties to the UNFCCC, 450 U.N. staff, 7,000 NGO observers and 1,500 from the media are in attendance.

The dire 1.5C report recently released by the IPCC (Intergovernmental Panel on Climate Change) shows that coal must drop by 97%by 2050 to keep warming to no more than 1.5 degrees Celsius. And another report released last week said meeting the 1.5-degree Celsius target is an “impossible” task.

The Gap is Getting Wider

The 2018 Global Emissions Gap Report was just released in November. It shows widening gaps that are of grave concern for world leaders who are serious about bending the curve on rising levels of GHGs. The report defines the emissions gap as the difference “between where we are likely to be and where we need to be….taking into account the latest scientific information, including the IPCC Special Report on 1.5°C.”

Following are some of the highlights taken from the report’s Executive Summary:

And now back to the speeding train. But let’s look at it from a different perspective. Let’s reverse the question. What do the speeding train and skyrocketing emissions not have in common. The difference is in the scope and the magnitude of each looming disaster. The speeding train will cause damages and possibly some loss of life. But life will go on after impact. The spiralling emissions will cause irreversible and catastrophic destruction and lead to rampant species extinction, hundreds of millions of deaths and the eventual collapse of our civilization.