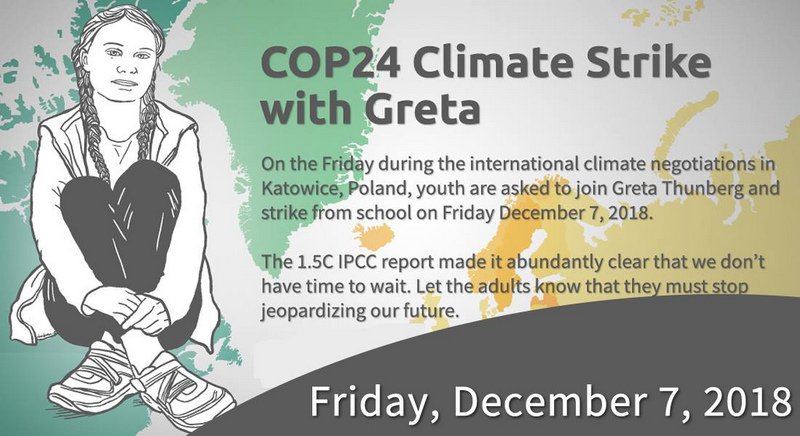 Under the hashtags #FridaysForFuture and #ClimateStrike, students around the world will be striking for climate on Friday December 7 during the COP24 climate talks happening in Katowice, Poland. As elsewhere, support for #ClimateStrike is soaring in Canada.

Sophia Mathur, an 11-year-old girl in Sudbury (Ontario, Canada), was the first Canadian youth to join @GretaThunberg of Sweden by cutting class to protest that the adults are jeopardizing her future. She skipped school on Friday, November 2, 2018.

Greta strikes every Friday. She is the Joan of Arc of the climate movement. She delivers her message in a sobering and captivating tone in this must-watch video.

She has inspired students around the world. In Australia, thousands of students walked out of class on Friday, November 30, in Sydney and 20 other centres. “This is our first strike,” said 14-year-old Jean Hinchliffe. “Our first action. And it is just the beginning. And we’ll keep doing it until something is done.”

Adults Are Jeopardizing Our Future

Sophia’s successful first strike has led to the creation of a website where #FridayForFuture strikes on December 7, during #COP24, can be registered from around the world. Organizers have worked closely with Greta Thunberg and her father. The website is a collaborative effort involving volunteers of Citizens’ Climate Lobby Canada, Climate Reality Canada and iMatter Canada. The key youth message is adults are jeopardizing our future.

Sophia’s next strike is on Friday, December 7. She is asking others to join her and strike with youth across the world. Youth in NINE Canadian cities — Victoria, Vancouver, Sudbury, Toronto, Kitchener, Kingston, Winnipeg, Ottawa, and Fredericton —  will be cutting class for the climate.

Why should we go to school if there is going to be no future? The climate crisis is solvable, yet some adults are jeopardizing our future by blocking real action. They are not listening to experts nor cooperating. They are behaving like bullies. What should we do? We must be brave like Greta Thunberg in Sweden and strike from school. Together, we can stand up to these bullies and because of their bad behaviour, they would unleash massive suffering on people and animals. Cut class on Friday, December 7, 2018, organize a protest and register your event NOW, and let’s build a network these bullies can’t ignore.

You can retweet her message here – @SophiaMathur

VIDEO #FridaysForFuture #ClimateStrike
Why I am striking from school on Fri Dec 7
If adults don’t give a damn about our future, why should we?
Thanks @GretaThunberg ?for leading the way.
Register: https://t.co/rw0DTqQrei@MattIngramCTV @AngelaGemmill @marykkeown @LiveableSud pic.twitter.com/6sXVNaOUc8

Related articles not to miss…
Strike For Climate: Fridays For A Future
We Have Time To Act But We Don’t Have Time To Wait