Below 2C
Home Climate Climate Action Our Kids Are Starting a Climate Revolution. Let’s Join Them Before It’s... 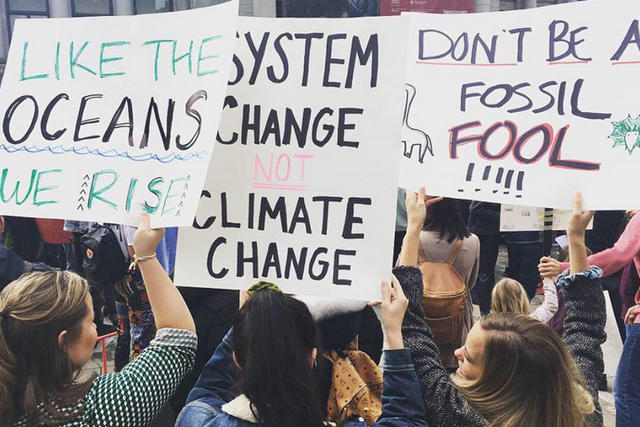 The September 20 to 27 worldwide climate week is a dream-come-true, a fairytale of sorts, a week which is tailor-made for climate activists. Just a year ago, who could have imagined that newcomers like Greta Thunberg and Alexandria Ocasio-Cortez and new movements like Fridays for Future, Sunrise, The Green New Deal, Extinction Rebellion would come to spark a climate revolution?

Canada’s national climate strike is this Friday when Greta Thunberg visits Montreal. Hundreds of thousands of Canadians, led by youth, will take to the streets to protest the lack of ambition by our governments in tackling climate change.

Following is an example of climate leadership by an Ottawa-based group headed by Mike Gerbis, CEO of GLOBE Series. In a recent memo, Mike encourages staff to march for the climate. The memo follows an Oped that was published in the Ottawa Business Journal. (Editor intro)

Our Kids Are Starting a Climate Revolution. Let’s Join Them Before It’s Too Late

A few days ago, I sent a memo to all my staff encouraging them to leave the office and join the youth-led strikes and marches across Canada to highlight the need for urgent action to address climate change. After that, I sent emails out to fellow CEOs and business leaders I know urging them to give their staff time off to strike.

It’s not something I did lightly or without careful thought. I haven’t demonstrated publicly in more than 20 years; I prefer to work quietly behind the scenes, but I am convinced that it’s now time to take to the streets. Climate change is by far the most pressing emergency we face — and we are fast running out of time to deal with it. I believe mass peaceful civil action, emulating campaigns like the civil rights crusade in the U.S., will force our leaders to focus on what’s at stake and come together to find fair and feasible solutions.

The Global Climate Strike and week of action starting grew out of a youth climate movement whose de facto leader is Greta Thunberg, the 16-year-old Swedish woman who has already made a big impression at events like the UN Climate Conference and the World Economic Forum. Her direct calls for action are aimed at all of the supposed grown ups in the room, and they spare no one…

Which is fair, because climate change is not a partisan issue. It is not an east-west or north-south issue. It is not even about politics. Climate change impacts all of us — and here at home, it impacts Canadians across all generations regardless of where they live, no matter what their political persuasion or economic standing. It threatens our businesses, our health, our children’s future, the natural environment we love and enjoy… everything all of us as a nation hold dear and treasure.

Time to Do the Most, Not the Least

It’s time to ask: “what is the most we can do?” rather than “what is the least we need to do?” We have less than 11 years to avoid the very worst of what climate change can bring; we don’t have time for any more excuses. If you think I’m being alarmist, you are quite right. This is the time to be alarmist. The reasons are everywhere, from increasingly frequent mega-storms of unprecedented ferocity to heat waves, melting polar ice caps, droughts, famine, crop failure, the rise of respiratory disease as air pollution worsens, and the spread of diseases to new areas as the planet warms up.

Which is why standing in solidarity with youth during the climate marches is so important. We need to come together and make our voices heard like never before — and listen to the fears, hopes and dreams of those who are under-represented in the hallways of power, but whose future is at stake. We need an intergenerational social compact that sends an irrefutable signal to leaders of all political parties: we need to change now, and we need you to work with business and civil society to develop — and implement — a bold plan of action.

The Situation Calls for a Bold Plan

The plan will almost certainly be unpopular; it will demand big sacrifices by all of us and will not be easy, but we simply have no choice — we don’t have a moment to lose. We have to fight for our future, for the future of the youth who are marching in the streets, and for the future of our children and grandchildren.

Join the youth of Ottawa this Friday, the 27th. Visit the Fridays for Future Ottawa Facebook event for more details.

Outside of Ottawa, you can find a strike to join near you at Global Climate Strike.

Mike Gerbis is CEO of GLOBE Series, which brings together leaders and innovators from business, government, and civil society to share knowledge, leverage opportunities and find solutions, and Chair of Leading Change, which helps equip sustainability leaders and young professionals between the ages of 19-35 with the skills and support networks they need to accelerate action towards a livable, inclusive future.

Greta’s Message: You Are Failing Us…You Have Stolen My Dreams and my Childhood
Friday September 27 Is Canada’s Climate Moment
Adults Need To Do Their Homework On The Climate