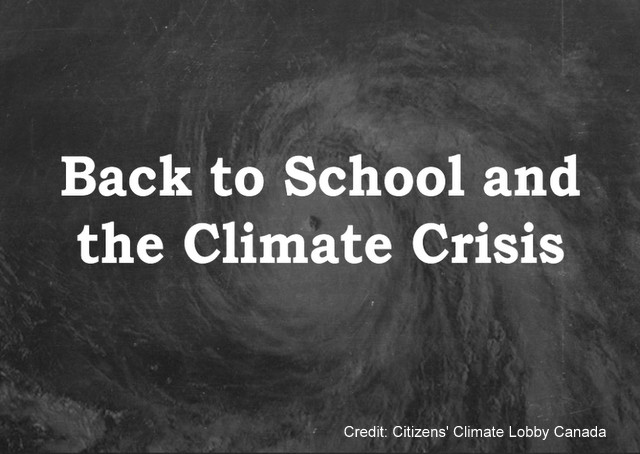 A recent Angus Reid poll (in August) shows that climate change and the environment are amongst the top issues facing voters in Canada’s upcoming federal election. And this September as students return to school and climate strikes resume across the land, climate change is sure to remain at the top of the political agenda.

Leaders discussing whether we have a climate crisis… 3/4 of Canadians say climate change is a serious/very serious threat: https://t.co/xvgKojd36t #elxn19 #firstdebate pic.twitter.com/oHwHqQ0IVP

“The upcoming global climate strikes on September 20th and 27th are almost certainly going to be the largest climate mobilization in the planet’s history,” writes Bill McKibben in a 350 Canada email to supporters. “Canada’s upcoming election is so important: it’s a very real, very immediate chance to actually change course.”

And so like their children going back to school and homework, it’s time for Canadian voters to also do some homework, on climate.

Adults: Do your Homework on Climate

With a new school year already underway, it’s back to homework and school projects for students. And adults should also engage in homework to prepare for casting perhaps their most important vote ever. We have a climate emergency and this vote may be a vote for survival.

This article is a Citizens’ Climate Lobby Canada press release issued on September 4.

Adults have homework because the kids are alarmed and they should be. Their summer vacation included the Amazonian fires, Greenland fires, Siberian fires, the fifth category 5 hurricane (Dorian) in four years, and the IPCC again ringing the alarm bells.

Greta Thunberg says, “You say you love your children above all else, and yet you are stealing their future in front of their eyes.”

What do adults need to do? They need to educate themselves.

The key is to use critical thinking skills and not get duped by bogus internet sites. A massive disinformation machine is jeopardizing the future for our children and for many of us in our golden years 20 years from now. If you are not convinced that there has been a deliberate campaign to fool the masses on the climate crisis, we recommend three books: The Merchants of Doubt by Naomi Oreskes, Climate Cover-Up by James Hoggan with Richard Littlemore and Dr. Kevin Taft’s Oil’s Deep State. [Editor adds The Big Stall]

If you are a climate newbie, you should probably start with the basics. Dr. Katharine Hayhoe, a Canadian climate scientist has a series of  videos called Global Weirding. We highly recommend “What’s the Big Deal with a Few Degrees” and “Oh Canada – Global Weirding”.

After you watch a few of Dr. Hayhoe’s videos, if you still feel you need to dig into policy solutions then Canada’s Ecofiscal Commission, Canadians for Clean Prosperity and the Pembina Institute are where some of the best expert opinions can be found in Canada. If you are the hands-on type and want to see how the various policies can cut carbon emissions try out Pembina’s Policy Simulator. HINT: carbon pricing is by far the most effective and efficient policy but find out for yourself.

If you are on Facebook and like to get your news from there, we recommend Fair Path Forward’s Facebook page. If you are on Twitter, check out @GeraldKutney and the ongoing #ClimateBrawl. Often, it is interesting to read the #ClimateBrawl crew dismantling of climate disinformation. WARNING: it is not for the lighthearted.

The climate crisis is literally the greatest threat to public health in the 21st century. Medical professionals concerned about the climate crisis can find excellent resources in the  Canadian Association of Physicians for the Environment toolkit. Two major recommendations from climate experts in the health community are that we need to price carbon and eat a diet much higher in plant-based proteins.

University students wanting to make an informed vote and learn from their peers should consider the Future Majority. In the upcoming 2019 federal election, eligible Millennial and Generation Z voters will outnumber every other voting-aged generation. They will “organize, unite and train young Canadians so that they step out of the shadows and change the political discourse in our country. Regardless of political affiliation, their voices will be heard as they begin to reshape the political landscape”.

Too Much Disinformation re Carbon Pricing

There is especially a lot of disinformation about the federal carbon pricing policy.

Firstly, most Canadians living in provinces and territories with the federal carbon price need to know that they received their climate rebate/dividend (called the Climate Action Incentive) on line 449 of their income tax forms in April 2019 before the carbon price kicked in.

Furthermore, the  Canadian carbon pricing policy returns 90% of the carbon fees collected back to households. By giving money back to Canadians, eight of ten Canadians will come out ahead. Rural and remote Canadians get an even larger rebate than urban dwellers. People living in provinces and territories with the federal backstop carbon pricing policy can calculate their rebate on Fair Path Forward’s Rebate Calculator. For a family of three living in an urban area in Ontario, their rebate from the federal government will be $2168 from 2020–2023. Calculate your rebate here: https://fairpathforward.ca/rebate-calculator/

After you do your homework the next thing to do is go to an election debate near you. On October 3 there will be the 100 Debates on the Environment across Canada.  On TV, an English Leaders’ debate is proposed for Oct. 7 with the French debate proposed for Oct. 10.

Honestly, action is where it is at. Join the youth at Fridays For Future events. The adults have been specifically asked to join the youth on the September 27 event but you can join them any time.

Then after you have done all your homework, vote on October 21. Vote for the Climate

Related articles:
Back to School: Teachable Climate Moments
Climate Politics Now at a Pivotal Moment In Canada and US