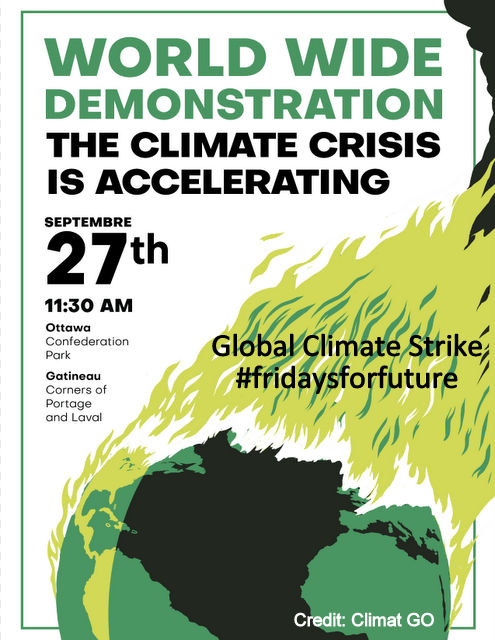 We’re in a Climate Emergency! And it’s time we start acting like it. 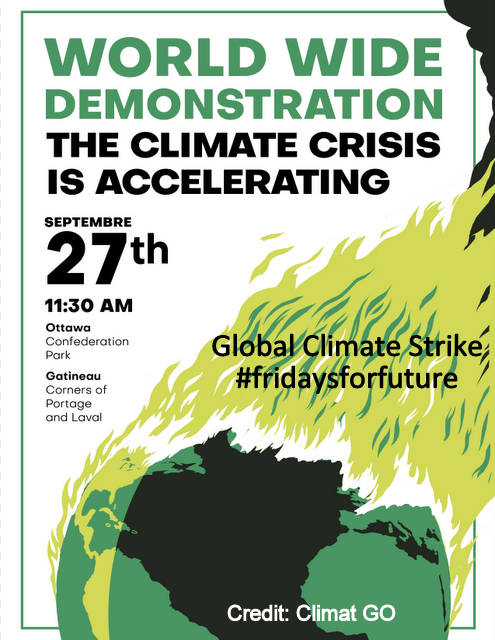 September is a month of climate action. The week of September 20-27 is packed with events and moments that will be pivotal in our efforts to take on the accelerating climate crisis. This global #WeekForFuture will involve climate mobilizations in almost every single country with thousands of events planned globally.

In Canada, Friday September 27 will be our climate moment. Thousands are expected to demonstrate in cities across the country asking governments to react now with an urgency that matches the magnitude and severity of the climate crisis.

We’re calling for massive participation on the part of adults —  alongside young people — to show that adults too are concerned and want to join forces in this global effort to raise awareness and to motivate more stubborn leaders to face reality and to act. — FridaysForFuture.Org

Sept 20 and 27 the World strikes again! Everyone is welcome, everyone is needed. I’ll be in New York 20/9 and in Montreal 27/9. Find or register your local strike at https://t.co/G06WbXNvl1 or local websites. Spread the word! #fridaysforfuture #climatestrike #schoolstrike4climate pic.twitter.com/BNI7ZywpsL

In Ottawa, Climat GO is the regional umbrella group that is coordinating activities on Parliament Hill. A myriad of groups and organizations are pooling their resources to support what is hoped to be the loudest call for more ambitious climate action by the next government soon to be elected on  October 21.

If you haven’t done so, please register for this historic event at the following Facebook Event page:

Act for the Climate, March for the planet – Ottawa/Gatineau

Climate Strike Canada is the overarching network of students, young people, activists, and allies, which connects all of the climate action surrounding the Canadian school strike movement. Its initial school strikes were inspired by Greta Thunberg’s “Fridays for Future” movement, in which children of all ages strike from school on Fridays to call for urgent climate action.

Because of Canada’s size and incredible diversity, not everyone who plans and attends a strike does it in the same way. Some strikes are not held on Fridays, some happen every month as opposed to every week, and some are planned and attended by parents, university students, and elementary school students, rather than just high schoolers.

However, we are united by a goal of climate justice, and we all empower, train, and equip one another with the goals and means to create change in our communities. Climate Strike Canada has 7 demands:

Greenpeace: There’s something every one of us can do

Greenpeace says “there’s something every one of us can do.” It calls for