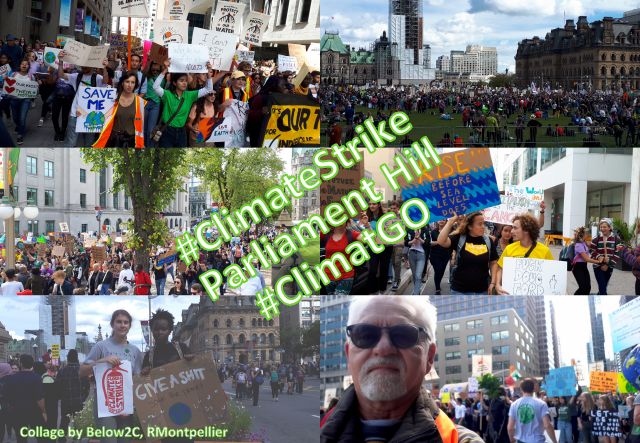 On June 17, Canada declared a #climateemergency. Considered as a symbolic move by the Liberal government ahead of a fall election, the declaration at first gathered little momentum. But what a difference a few months make. Close to a million Canadians showed up for the global #climatestrike last Friday.

The following article was first published in The Energy Mix, one of Below2C’s collaborative partners.

An estimated one million Canadians took to the streets Friday for youth-led #ClimateStrike marches and rallies in many dozens of communities across the country, part of a global day of action that saw many millions more around the world leave their schools and jobs to demand government action to reverse the climate crisis.

In Canada, Montreal was the biggest single focus for strike activity, with #FridaysForFuture founder Greta Thunberg in town, Indigenous youth leading a massive crowd of 500,000 students and their supporters, Liberal leader Justin Trudeau and Green Party leader Elizabeth May both joining the march, and Thunberg meeting with Trudeau beforehand and telling him he isn’t doing enough to confront climate change. NDP leader Jagmeet Singh took part in the march in Victoria, British Columbia.

“We are not in school today, you are not at work today, because this is an emergency, and we will not be bystanders,” Thunberg told the march, the largest in Quebec history. “Some would say we are wasting lesson time. We say we are changing the world. So that when we are older, we will be able to look our children in the eyes and say that we did everything we could back then.” CBC has unforgettable drone footage of the Montreal march.

In her 15-minute meeting with Trudeau, Thunberg said she delivered her usual message.

“I try not to focus on the individuals and rather focus on the whole picture,” she told CBC. “Of course it’s easier to just blame someone and of course he has a lot of responsibility…and he, of course, is not doing enough.” But “this is a system that is wrong. So my message to all the politicians is the same—to just listen to the science and act on the science.”

“She is the voice of a generation of young people who are calling on their leaders to do more and to do better, and I’m listening,” Trudeau responded, during a news conference to announce his party’s plan to plant two billion trees over the next 10 years if it forms the next federal government.

Global News says 120,000 strikers turned out in Vancouver and Victoria. VOCM Radio had word of a massive march in St. John’s, Newfoundland, and hundreds rallied in Calgary in the heart of oil country, as Alberta school boards considered whether to excuse students from school for the day. Tens of thousands were out in Toronto, bringing the message to the provincial legislature at Queen’s Park that “youth are rising”, as 2,500 students and faculty petitioned the University of Toronto to shut down for the day. Tens of thousands overflowed Parliament Hill in Ottawa, and local schools agreed to accommodate students’ participation in the strike. Local students and their supporters rallied in Fredericton and Waterloo, the Winnipeg school division endorsed the strike, a soap company in Corner Brook, Newfoundland staged a “digital climate strike” to support the effort, and several other retailers planned to close up shop for the day, including Mountain Equipment Co-op, Lush Cosmetics, Patagonia, and Ottawa’s Bridgehead coffee house chain.

CBC had national roundups of the #ClimateStrike action here and here. On CBC, as well, business columnist Don Pittis reinforced Thunberg’s statement to last week’s UN Climate Summit that “all you can talk about is money and fairy tales of eternal economic growth”, citing Canadian economist Peter Victor’s work on low- and no-growth economies. And the Vancouver Sun ran a retrospective on Severn Cullis-Suzuki, who at age 12 became known as “the girl who silenced the world for five minutes” when she urged the 1992 Earth Summit in Rio de Janeiro to take action on species extinction and global warming.