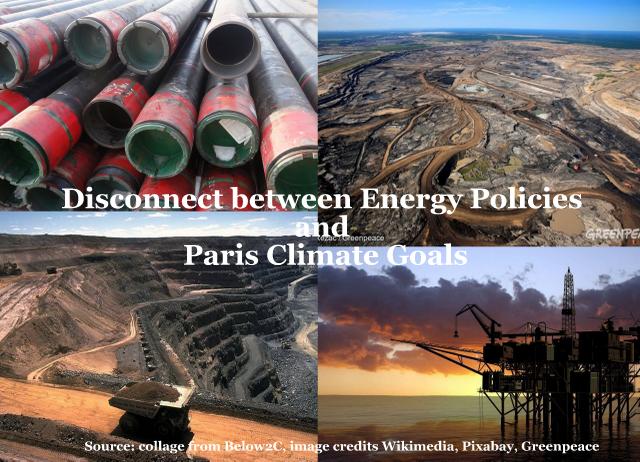 “There are reasons to believe that the Paris agreement is in bad shape, that in the 2020s it could break down or even fall apart entirely,” writes Dave Roberts in a recent Vox article. Under the Paris Agreement, every country has committed to reducing its emissions by 2030. And the only way to do that is to reduce fossil fuel expansion. In this article, Stephen Leahy shows the disconnect that exists between the Paris goals and the pro-fossils energy policies of countries around the world. First published in National Geographic.

Global governments plan to produce 120 percent more fossil fuels by 2030, drastically at odds with the 2.7 degrees Fahrenheit (1.5 degrees Celsius) warming limit they all agreed to under the 2015 Paris Climate Agreement. All major fossil fuel-producing nations—including the United States, China, Russia, Saudi Arabia, India, Canada, and Australia—have ambitious plans to increase production, according to a new report by leading research organizations and the United Nations.

Using publicly-available government documents, the report found that countries’ plans to increase production of coal, oil, and gas amounts to 120 percent more in 2030 than would be consistent with limiting global warming to 2.7 degrees F. Those plans include producing 280 percent more coal. That puts the world on a path to more than 7.2 degrees F (4 degrees C) of warming, says Lazarus.

“This report shows, for the first time, just how big the disconnect is between Paris temperature goals and countries’ plans and policies for coal, oil, and gas production,” Lazarus says. “Even countries claiming to be climate leaders like Canada and Norway say they want to maximize their fossil fuel exports,” he said in an interview.

Such a rise in global temperatures would hasten the melting of Earth’s ice sheets, raising sea levels; increase the number of big storms and the amount of rain they dump; force the migration of animals to new habitats as their homes heat up; and heighten the danger of infectious diseases to humans, among other effects.

“Consider me shocked, but not surprised” by the report, says energy economist Gernot Wagner at New York University. If the world uses even 20 percent more fossil fuels in 2030 than today it is “bound to create massive systemic risks,” says Gernot, who was not involved in the report.

“The incentives around fossil fuel extraction are all screwed up. Globally, we are still subsidizing fossil fuel use to the tune of half a trillion dollars per year,” he writes in an email.

Investments in new fossil fuel infrastructure today “locks in” fossil fuel production. If it continues as planned countries will end up producing between 40 and 50 percent more oil and gas by 2030 than would be consistent with limiting warming to 3.6 degrees F (2 degrees C). In a landmark report last year the Intergovernmental Panel on Climate Change warned that 2 degrees C of warming would have enormous impacts and costs on the environment.

“For the first time the UN has presented the crystal clear science: we must stop the expansion of the fossil-fuel industry immediately,” said May Boeve, Executive Director, 350.org, an environmental organization.

Of the 27 fossil fuel-producing countries, the top nine account for over two-thirds of global fossil fuel CO2 emissions, the report says. The U.S. currently produces more oil and gas than any other country, and is the second largest producer of coal. Oil and gas production will increase to 30 percent above current levels by 2030 predicts the Energy Information Administration (EIA). The U.S. has begun the process of withdrawing from the Paris agreement.

Governments issue the extraction permits and provide production and consumption subsidies, so they’ll have to take the lead on phasing down fossil fuel production, says Stephen Kretzmann of Oil Change International, a U.S. non-profit research organization focused on the costs of fossil fuels.

Governor Gavin Newsom has stopped approval of new hydraulic fracturing for oil and gas in the state pending reviews by an independent panel of scientists. This was a step toward the phase-out of “our dependence on fossil fuels and focus on clean energy sources,” Newsom said in a statement.

Countries have numerous options for closing the production gap, including limiting exploration and extraction, removing subsidies, and aligning future production plans with climate goals. The report details these domestic policy options by governments that can restrain—or at least not subsidize—the supply of fossil fuels, says Steve Davis, a climate researcher at the University of California and a contributor to the report.

Phasing down fossil fuel production needs to be done in ways that ensure those affected by social and economic change are not left behind, the report concludes. Germany, one of the world’s largest coal producers, will phase out coal power plants entirely by 2038, as well as lignite coal mining. It has set aside $47 billion in government support to compensate those affected.

“Despite more than two decades of climate policy-making, fossil fuel production levels are higher than ever,” says Stockholm Environment Institute’s Executive Director, Måns Nilsson. “This report shows that governments’ continued support for coal, oil, and gas extraction is a big part of the problem. We’re in a deep hole—and we need to stop digging.”