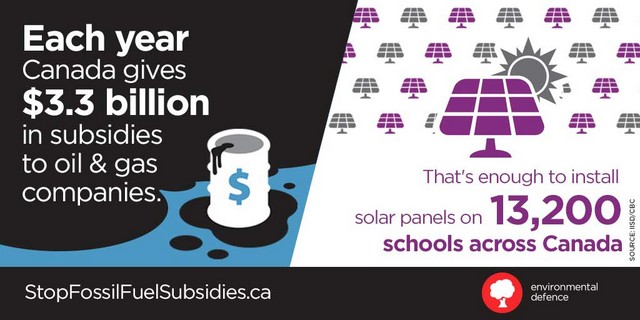 Possibly the dumbest policy in the world is “using public cash for oil and gas,” says Patrick DeRochie, Program Manager for Climate & Energy at Environmental Defence. Canada’s massive fossil fuel subsidies give Canadians the dubious distinction of being the G7 leader in handouts to Big Oil.

While paying near record-high gasoline prices, Canadians will be thrilled to know every woman, man, and child in Canada also “donates” around $100 ($77 USD) to profitable, and often foreign-owned, oil and gas companies. That donation, in the form of federal and provincial subsidies, amounted to an average $3.67 billion ($2.84 billion USD) annually in 2015 and 2016. That makes Canadians the most generous among the G7 nations, a new study reveals.

The study documents how much support each G7 country doles out to oil, gas, and coal industries. Using this data Motherboard calculated that government support for oil and gas production averaged $100 per Canadian in 2015 and in 2016—or $400 ($308 USD) for a family of four. That’s far more generous than larger economies like the US and Japan that gave the industry $60 ($46 USD) and $50 ($39 USD) per person respectively.

Under Prime Minister Justin Trudeau, Canada’s Liberal government promised to be a leader in cutting carbon dioxide (CO2) emissions driving climate change. But it still provides the most government support for oil and gas production per unit of GDP, according to the G7 Fossil Fuel Subsidy Scorecard study, released in advance of the G7 summit in Charlevoix, Quebec, [just held] on June 8 and 9.

“These subsidies are in fundamental conflict with Canada’s commitment to the Paris climate agreement,” says study co-author Yanick Touchette, policy advisor at the International Institute for Sustainable Development (IISD), an independent think tank based in Canada. Under the Paris climate agreement, Canada, and virtually every other nation in the world, agreed to dramatically cut CO2 emissions that result from using fossil fuels.

“These subsidies are in fundamental conflict with Canada’s commitment to the Paris climate agreement.”

Is the Kinder Morgan Buy-out a Subsidy?

The Trudeau government’s recent $4.5 billion ($3.5 billion USD) purchase of Kinder Morgan’s Trans Mountain pipeline will likely involve yet more subsidies for the oil industry, Touchette said. After all, no other investor wanted to buy the controversial pipeline that pumps oil products from Alberta oil sands to the BC coast. “The government hasn’t released its economic analysis of the purchase so we don’t know how much of a subsidy it will involve,” said Touchette.

To put the $3.67 billion in oil and gas subsidies in perspective, the federal government and the four largest provinces in Canada spend about $29 billion ($22.4 billion USD) a year on subsidies to the business sector, which includes the oil and gas industry, according to a recent University of Calgary research paper. Alberta is by far the most generous, with each Albertan in effect donating $640 ($494 USD) to various business sectors in the fiscal year 2014-15. Alberta is also the least transparent in letting the public know about its subsidies, the paper noted.

To be clear, subsidies are not usually cash handouts. They’re a mix of tax breaks, tax credits, and regulations that forgo government revenue, transfer liability, or provide services such as loan guarantees or equity infusions at below-market rates. These are often well hidden from public view. The study also found Canada to be a leader in its lack of transparency regarding subsidies.

Not all Subsidies are Bad

Some can help small business or support new industries. In 2009 Canada, under Conservative prime minister Stephen Harper, and other G7 nations promised to reform environmentally harmful subsidies and eliminate those supporting fossil fuels because they distort markets, impede investment in clean energy sources, and frustrate efforts to address climate change.

While Canada has eliminated support for coal, it continues to provide billions in support of oil and gas production amounting to $19 ($15 USD) for every ton of CO2 the industry emitted, Motherboard estimates.

Canada’s fossil fuel subsidies also undermine the purpose of carbon pricing, meant to discourage investments from producing more fossil fuel, according to Touchette. The Trudeau government has mandated a national carbon pricing system where oil and gas companies and other major CO2 emitters will have to pay $10 ($8 USD) per ton of CO2 emitted starting in September, and rising to $50 ($39 USD) a ton by 2022.

The recent G7 meeting in Charlevoix was an opportunity for the Trudeau government to take the next logical step and produce a concrete plan to phase out its fossil fuel subsidies in the next few years, according to Alex Doukas of Oil Change International, an organization focusing on showing the true costs of fossil fuels.

“Canada could use its G7 presidency as an opportunity to pressure its peers to do the same,” said Doukas in a release.

G7 Fossil Fuel Subsidy Scorecard ranks countries on their transparency, commitments, and progress made on ending support for the production and use of oil, gas, and coal by 2025. That support from G7 governments amounts to at least $100 billion USD each year, the study found.

The scorecard ranks Canada third best of the seven, giving it high marks for ending public financing of coal-fired power and not encouraging fossil fuel consumption by artificially keeping prices low. The US ranked last—for continuing to subsidize exploration and production and backtracking on previous pledges.

This article by Stephen Leahy was first published in MotherBoard.