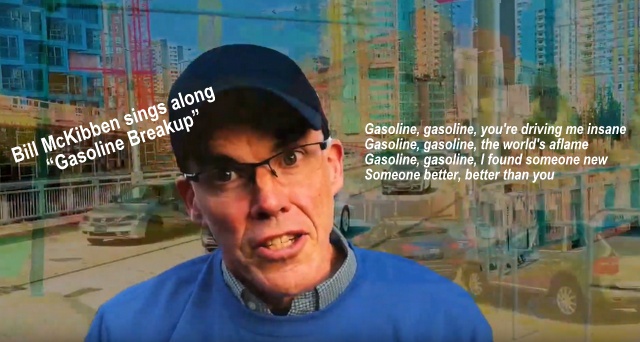 The world urgently needs to break up with gasoline. And a song is a great way to get people to sing along and get comfortable with that idea. That’s why we wrote the song, Gasoline Breakup. The lyrics describe our frustrations with gasoline through the lens of a romance gone wrong.

Lyrics – you can sing along…

The lyrics are inspiring and so empowering. And oh yes, they’re fun too. Just think how great it feels to tell your no-good lover to take a hike or hit the road.

You took me for a ride, and now we’re lost
I’m choking on your pollution trip
You’re making me cough…You’re turning me off
I’m breaking this relationship

We had a good run but now we’re done
You’re poisoning our atmosphere
You don’t even care, pumping dirt in our air
We gotta leave you in the ground

The story behind Gasoline Breakup

“Our love affair with gasoline is over. And it’s time for a breakup song.” Franke James, Billiam James

Our goal is to inspire people to reject gasoline and embrace alternatives. Stopping gasoline use is the most effective way to address air pollution and climate change. Ultimately we want to portray gasoline as unattractive, unhealthy, and socially unacceptable. This kind of attitude shift will help open the door to the systems and policies change that we need to address the climate crisis.

It all started when Matthew Metz, co-executive director of Coltura, whose mission is a gasoline-free America, read “My SUV and Me Say Goodbye” story, about us selling our only car in 2007.

He came to Vancouver and invited me to create a visual story about ending gasoline use. However, I told him I’d like to do something different—write a song about breaking up with gasoline. Songs tell stories and can address tough issues that many people don’t want to talk about. But in a song, people actually sing along making it ideal for talking about climate change. Songs get into your head in a way that is very different from other art forms. They can change people’s minds and feelings. That appeals to me. So, my ambition was to write a catchy song about breaking up with a bad lover (aka Gasoline).

Gasoline Breakup is one of 50 films competing for awards on all social media and particularly on YouTube. The online Mobile Film Festival is running from November 14 to November 30. On November 19, the top ten films will be chosen based on the number of views on social media platforms. So you need to ACT NOW to show your support for Gasoline Breakup.

The winning films will later be presented online, at screenings in cultural centres, in festivals, in cinemas, as well as by their 90 NGO partners on social media.

Related articles:
The Big Leap: From Picking Up Dog Poop to Getting Off Fossil Fuels
Canada’s Massive Fossil Fuel Subsidies Equal $100 Per Person