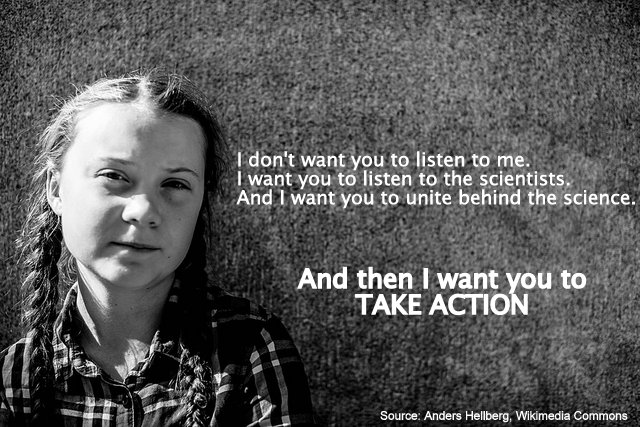 The strongest message on Climate in 2019 did not come from the IPCC (Intergovernmental Panel on Climate Change). Nor did it come from climate scientists, or world leaders, or the Pope, or the United Nations. It came from 17-year old Greta Thunberg, Time Magazine’s person of the year for getting the world’s attention on the climate threat.

The Bright Star Shining on the Climate Movement

In the 17 months since Greta Thunberg began her climate strikes (August 2018), she has easily become the most influential climate leader on the planet. She has met with heads of state, addressed world leaders at the United Nations, the World Economic Forum, governments of several countries — the United Kingdom, Ireland, The EU Parliament, the U.S Congress — and inspired millions to join the largest climate demonstration ever on September 20, 2019. Thunberg is synonymous with “climate strike” which was declared word of the year by Collins Dictionary. Her impact on the climate movement is immeasurable.

David Roberts (writing in Vox) zeroes in on the primary reason for Greta’s success and appeal. “Thunberg has sidestepped attacks on her motives by almost entirely refraining from endorsing specific political reforms or policies,” writes Roberts. Greta simply says “I can’t really speak up about things like [politics]…no one would take me seriously.”

I want you to listen to the science

Greta wants world leaders to follow the science. Her insistence on this point was illustrated when she submitted the IPCC’s report on limiting warming to 1.5 degrees Celsius in lieu of testifying to the US Congress. Attached was a short letter that said: “I am submitting this report as my testimony because I don’t want you to listen to me. I want you to listen to the scientists. And I want you to unite behind the science. And then I want you to take action.” Greta does not allow her actions to take center stage. She insists that science, not politics, must lead climate policy.

In Intelligencer, David Wallace-Wells writes about Greta’s “extraordinary rise…and her Hail Mary climate movement.” He points out that she’s “the Joan of Arc of climate change, commanding a global army of teenage activists numbering in the millions and waging a rhetorical war against her elders through the unapologetic use of generational shame.”

The following Greta quotes have come to dominate the post-hope climate era we are now living in.

You only speak of green eternal economic growth because you are too scared of being unpopular. You only talk about moving forward with the same bad ideas that got us into this mess, even when the only sensible thing to do is pull the emergency brake. You are not mature enough to tell it like it is. Even that burden you leave to us children…Our civilization is being sacrificed for the opportunity of a very small number of people to continue making enormous amounts of money. — COP 24 climate conference in Poland

The year 2078, I will celebrate my 75th birthday. If I have children, maybe they will spend that day with me. Maybe they will ask me about you. Maybe they will ask why you didn’t do anything while there still was time to act. You say you love your children above all else, and yet you are stealing their future in front of their very eyes. — COP 24 climate conference in Poland

Living is a post-hope era

Greta Thunberg has emerged as the new climate guru in a post-hope world. The Paris Agreement promised to keep the warming of the planet well below 2 degrees Celsius and aim for 1.5 degrees. But recent reports show that landmasses have now passed 1.5 degrees and large sections of oceans have as well. As Wallace-Wells writes, “that ship had already sailed” by the time Greta reached New York after her carbon-free crossing of the Atlantic ocean.

You might like:
The 2010s Were The Most Devastating Decade Yet
It’s the 2020s And We’re In A Climate Emergency. OMG