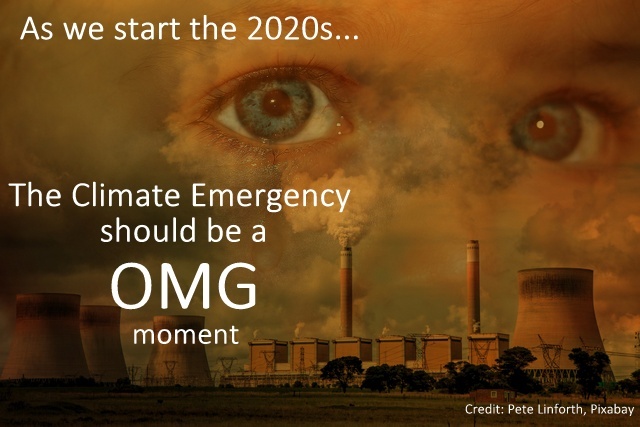 In this Oped, first published in Friends of Canadian Broadcasting, Stephen Leahy maintains that “the climate emergency should be an OMG moment for Canadians — if they knew about it.”

We need to cut our carbon emissions by 10 per cent, or 71 million tons, in 2020 and every year after that to get our emissions to zero by 2050, as our government pledged in Madrid. Why isn’t the media telling us the hard truth?

We’re in a Climate Emergency

Canada is in the middle of climate emergency, acknowledged the House of Commons in a vote that passed by 186 votes to 63 last June. To meet this emergency, Canada needs to cut its carbon emissions by at least 10 per cent — roughly 71 million tons — by the end of 2020. And we need another 10-per-cent cut by the end of 2021 and every year thereafter. That’s what it would take to get our emissions to zero by 2050, as the federal government pledged to do at the UN climate talks in Madrid earlier this month — a 61-67 per cent decrease in emissions by 2030.

Despite our international obligation to cut emissions under the 1997 Kyoto Protocol, Canada’s carbon emissions have bounced up and down between 700 and 740 million tons per year in the 20 odd years since. Only the 2008 recession saw them briefly dip below 700 million tons. Now we have to get to 645 million tons by the end of 2020.

This stark reality ought to be a OMG moment for Canadians — if they knew about it. Just as doing business as usual in Canada is absurd in an emergency situation, so is doing journalism as usual.

Journalism in a time of Climate Emergency

Stories should be reported in the context of our reality: our climate emergency is a threat to human civilization, according to the world’s leading scientists.

How should journalism be done in a time of climate emergency? For starters, stories should be reported in the context of our reality: our climate emergency is an existential threat to human civilization, according to the world’s leading scientists. For Canada to do its part in avoiding this global calamity means our emissions must decline 71 million tons in 2020. Any responsible media worth supporting and defending needs to ask questions that arise from that context, namely, how whatever they’re reporting on helps Canada meet its emission reduction obligations. If it doesn’t, then it’s fair to ask: “Why is this happening? Don’t you know we’re in a climate emergency?”

Media has an important role to play in reminding and informing society that we can no longer do business as usual. At all levels of reporting — from town hall meetings to corporate press events — business as usual needs to be challenged and alternatives explored. We have to move quickly into uncharted waters, and no one knows how to make all the changes that are needed.

We’re long past the point of Business As Usual

The federal government made a business as usual decision to spend at least $12 billion to build the Trans Mountain pipeline expansion that will ship an additional 590,000 barrels of diluted bitumen every day from Alberta to the B.C. coast. If reporting on the pipeline includes the context of the climate emergency — and Canada’s need to cut 71 million tons by the end of 2020 — it reveals the fundamental absurdity of using taxpayer dollars to inflame our emergency situation, no matter how many times the Prime Minister blandly claims the pipeline is in the national interest.

Canada’s carbon elephant in the room is the oil and gas industry, our biggest and fastest-growing source of emissions.

Media can also explore how that $12 billion could be used to reduce emissions. What if this public money were used to improve support for electric vehicles (EVs) to boost the ineffective $5,000 incentive under the iZEV program to $15,000 per vehicle? That would bring most EVs well below the $40,000 Canadians currently spend on average for new vehicles.

That $15,000 per vehicle support would be enough to spark the sales of 1.2 million EVs, cutting emissions by six million tons a year, reducing air pollution and associated health costs and cutting noise levels in urban areas. It might even encourage a couple of automakers to open new EV manufacturing plants to meet the demand. Or what if some of that $12 billion went to creating a Crown corporation making EVs at GM’s shuttered Oshawa car plant?

Putting 1.2 million new EVs on the road in 2020 to cut emissions by six million tons seems completely impractical. Keep in mind our emergency context: a 71-million-ton reduction in 2020 alone. This is how deep our climate emergency has become. And we’re digging it deeper.

CO2 is forever: every ton we emit will continue adding heat to our atmosphere for thousands of years.

Filling the new Trans Mountain expansion pipeline currently under construction will increase Canada’s total emissions by 13 to 15 million tonnes of CO2 a year just from getting the bitumen out of the ground and processing it, according to federal government studies. This doesn’t include emissions from refining or burning the petroleum products that will put at least 100 million tons of CO2 every year into our atmosphere. (A barrel of oil contains roughly 0.5 tons of CO2, so 590,000 barrels a day from the Trans Mountain expansion will put 107 million tons into the atmosphere every year.) Media also need to remind Canadians of the basic science that CO2 is forever: every ton we emit will continue adding heat to our atmosphere for thousands of years.

So what if Canada and Alberta had invested the $200 billion that went into developing the tar sands in wind energy instead? That $200 billion would have provided enough clean electricity to power more than 122 million EVs, I estimated for an 2018 article in The Guardian. That’s nearly double the number of vehicles the oil sands currently fuels. Plus the co-benefits of not having lakes of toxic waste, nor chopped-up forests in Alberta and Saskatchewan, and without a potential $260 billion clean up cost liability. And driving all those EVs would be CO2 and air pollution free.

That article wasn’t based on any report or study since it seems no one had ever asked that question.

Since journalism as usual is not an option, we must find new sources of information, knowledge and expertise. To paraphrase Albert Einstein: we’re not going to get out of this mess by talking to the same people who got us into it.

Spread a wide net to find sources and experts of all ages and sectors to interview. When in uncharted waters, it’s wise to ask the locals, especially Indigenous peoples and youth, about possible ways to navigate them.

The Carbon Elephant in the room

Canada’s inescapable carbon elephant in the room is the oil and gas industry — our biggest and fastest-growing source of emissions. It was extremely rare for business reporting on the energy industry to even mention the ‘c’ word. That’s changed. but too often “climate” gets little more than a superficial mention. It is still rare for reporting on a new energy project such as Teck Resources’ proposed $20 billion oil sands mining operation to be properly framed in our climate emergency context. The Teck project, located near Wood Buffalo National Park, could end up producing 260,000 barrels of bitumen every day, adding millions more tons of CO2 to the atmosphere.

It ought to be shocking that anyone would invest in such a project. No doubt some Canadian banks and investment funds are involved. Media ought to find out and tell Canadians how their savings are being cruelly mismanaged.

We’re now so deep into a climate emergency that just about everything, not just energy projects, needs to be seen through a climate lens.

Canadian media have been complicit in failing to inform the public about the threat of climate change. Now we must take up a new role in helping Canadians understand the sweeping changes needed and speak truth to those who would keep us on a suicidal business-as-usual pathway.

You might like:
The Climate Solution Requires Going Into Emergency Mode
GHGs Show No Slowdown, No Decline: #GlobalHeating Shoots Up