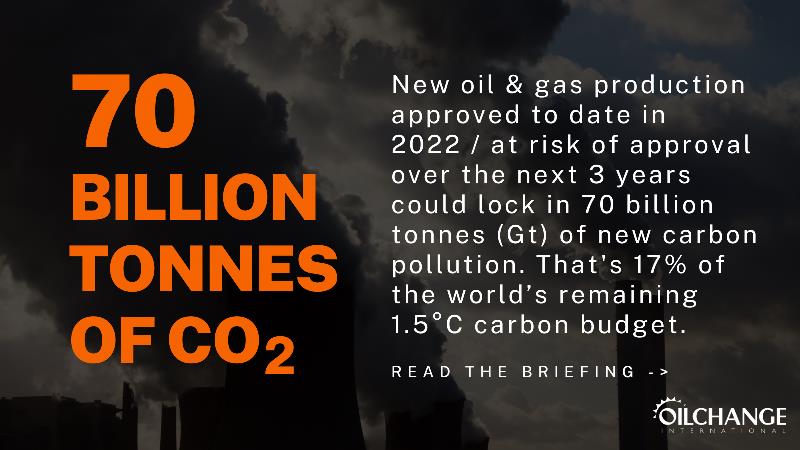 A new briefing by Oil Change International, Investing in Disaster reveals that new oil and gas production approved to date in 2022 and at risk of approval over the next three years could cumulatively lock in 70 billion tonnes (Gt) of new carbon pollution.

(This post is sourced from the Oil Change International Toolkit, Press Release, briefing materials and graphics.)

A new briefing released, titled “Investing in Disaster: Recent and anticipated final investment decisions for new oil and gas production beyond the 1.5°C limit”, reveals the countries and companies responsible for approving the most new oil and gas extraction in 2022 despite the clear evidence that fossil fuel expansion is incompatible with holding global warming to 1.5°C. It also warns that the oil and gas industry is poised for a disastrous surge of new expansion over the next three years – unless governments and communities put a stop to it.

That is equivalent to: 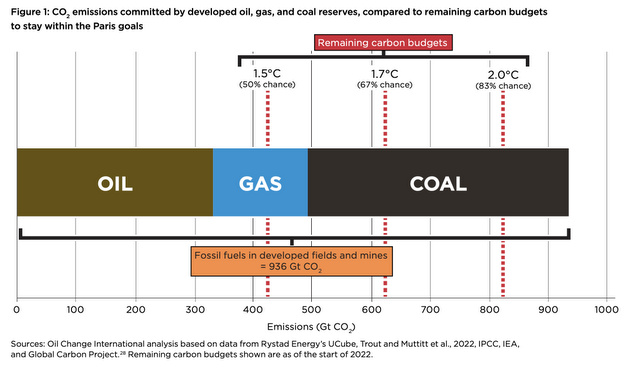 Governments Must Step In

Governments must step in to stop further expansion and adopt policies that ensure a managed phase-out of fossil fuels alongside a rapid scale-up of just transition support and clean-energy solutions. Specifically, we recommend:

Big wealthy producer nations like the U.S. [and Canada] are undercutting their stated climate goals by continuing to drive up fossil fuel production.