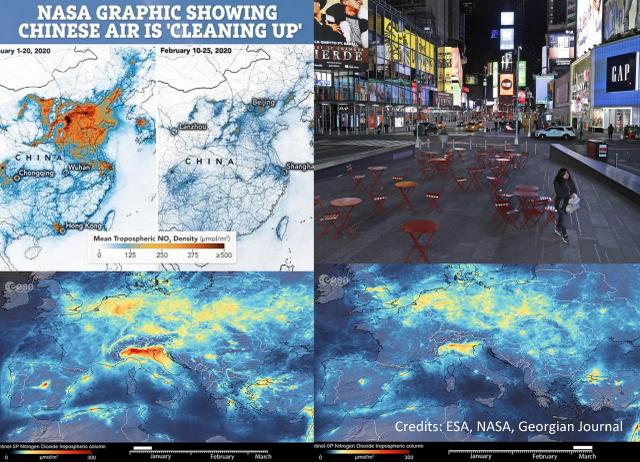 Truth and life lessons often come to us the hard way. An old Chinese proverb says that one way to learn to do something right is to do something wrong. And we humans have been doing many things wrong for many decades. We’ve been dumping carbon pollution into our atmosphere since the industrial revolution began in the middle of the 19th century. And we’ve been debating whether global warming is caused by humans for decades as well. And now, with the pandemic, we have the answer. Coronavirus lockdowns prove air pollution is manmade. This article was first published in Common Dreams. (Editor intro)

The sharp reduction in emissions from power plants, fracking projects, vehicles, and other human activities, however, must not be mistaken for an acceptable substitute for concrete climate action, advocates cautioned. As power plants, public transportation, and businesses shut down in a growing number of countries around the world due to governments using widespread social distancing practices to slow the spread of the coronavirus, climate scientists are recording a drastic drop in planet-heating fossil fuel emissions.

At TIME, New York University climate economics professor Gernot Wagner wrote Wednesday that the goal of climate activists—to allow humans to live healthy lives and to stop the suffering caused by the human-caused warming of the planet—is undoubtedly not being met by the coronavirus pandemic. The outbreak has spread to over one million people worldwide, according to reports, and forced global economies to grind to a halt, putting millions out of work.

“If this were what climate success looked like, I wouldn’t want to vote for it,” Wagner wrote. “I care about climate change because I care about people, and people are dying right now. Thankfully, true climate success isn’t anything like today’s situation—even if emissions are down.”

As CNN reported Wednesday, India, one of the world’s most polluted countries, is seeing significant drops in the emissions that have led to pollution that’s plagued its population for decades.

Just a week into the country’s national lockdown, officials in New Delhi this week recorded a 71% reduction in PM 2.5, microscopic particulate matter which can cause serious health problems when inhaled.

Nitrogen dioxide, which is emitted from vehicles and power plants, also fell dramatically in March in India’s major cities, including Bangalore, Mumbai, and Kolkata.

The sharp drop in emissions can be seen as positive only in that it illustrates the undeniable fact that climate scientists and activists have been demanding policymakers to act on for decades, said Indian environmental organization Care for Air.

“It does prove that air pollution is manmade,” co-founder Jyoti Pande Lavakare told CNN. “It gives a lot of encouragement and hope that we can bring pollution down.”

“Right now, we have a priority, we need to stop this big crisis,” she added. “But when things are under better control…we need to move towards renewable energy faster. It would be really sad [if] we make the same mistake again, using coal and non-renewable energy.”

In China, which is also among the biggest emitters of climate-warming fossil fuels, the halting of industrial manufacturing since the coronavirus pandemic has caused carbon emissions to drop by nearly 25%—the equivalent to 200 million tons of carbon and more than half the annual emissions of the U.K., according to the Center for Research on Energy and Clean Air.

But the suggestion by some that the drop in emissions represents “success,” wrote Wagner, not only ignores the current suffering of hundreds of thousands of people—it also lets policymakers off the hook by suggesting they aren’t required to take action to permanently reduce fossil fuel emissions by ending their support for powerful oil and gas companies and instead investing in sustainable energy.

Extinction Rebellion Scotland last week had a vehement warning for those the group observed claiming the pandemic’s effect on harmful emissions, brought on by the retreat of many into their homes and away from businesses and transportation, should be celebrated.

“We need to…be clear that any claim that a global pandemic and loss of thousands of human lives is a good thing for the climate is far more dangerous than the virus itself,” the grassroots group tweeted.

“We condemn and reject any headline or argument that sees emissions dropping as the silver lining to a pandemic killing thousands of people,” Extinction Rebellion Scotland wrote. “This is a crisis, with side effects that can lead to change if we want it to, but all that lies in uncertainty. For now, we will be focusing on giving our solidarity and collective action to those suffering and at the frontlines of this crisis.”

ICYMI
Speaking The Truth About Coronavirus And Climate Change With Kids
What Should Banks Be Telling Us?