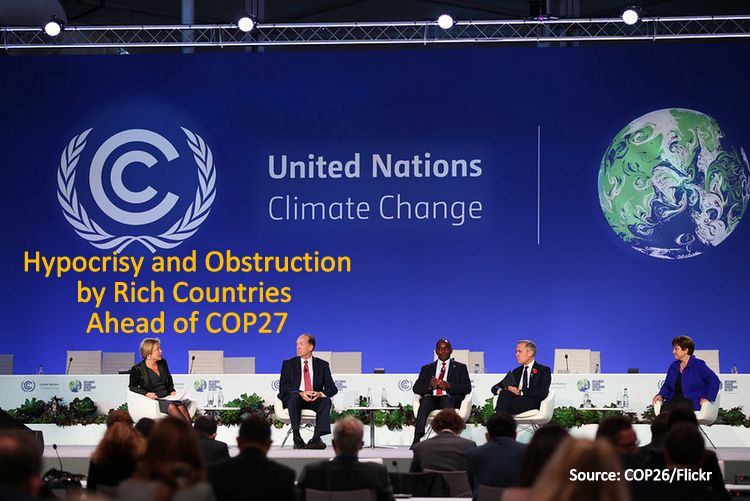 While COP26 in Glasgow achieved small steps, most of the heavy lifting lies ahead for COP27 and well beyond. The hypocrisy and obstruction of rich nations remains the primary stumbling block particularly with respect to the loss and damage that many countries now witness as global warming accelerates.

(The following article by Mitchell Beer was previously published in The Energy Mix.)

The world’s richest countries stood accused of hypocrisy and international negotiators were left with a long list of issues to tie up after the UN climate secretariat hosted two weeks of talks leading up to the COP 27 summit in Sharm el-Sheikh, Egypt later this year.

The smaller mid-year sessions in Bonn, Germany were meant as a forum for discussion, not final decisions, on the detailed technical issues that underlie global climate negotiations, and this year’s “subsidiary body” meetings began with a long list of new mandates from the COP 26 summit in Glasgow, Scotland. But veteran climate observers attending the negotiations still accused many of the world’s wealthiest countries of obstructing crucial discussions on emission reductions and climate finance, including a response to the unavoidable loss and damage that many developing countries already face as a result of accelerating climate impacts.

“Despite their reassurances from COP 26 to take finance and addressing loss and damage seriously, through the last two weeks rich countries, particularly the EU, Switzerland, and the USA, consistently stalled progress on discussions on loss and damage,” blocking developing countries from even getting the issue onto the formal COP 27 agenda so that it can be debated and resolved, Climate Action Network-International said in a release.

“This uncertainty and lack of leadership from rich polluters set up challenges ahead of the G7 summit and in building trust before COP 27.”

“There is no clear finance for the loss and damage that is right now undermining fundamental human rights in our region. This is essential,” Marshall Islands climate envoy Kathy Jetn̄il-Kijiner told participants in the early days of the negotiations. She added that none of the climate finance now available to vulnerable nations, whether it’s humanitarian aid or climate adaptation funding, “even comes close to the scale of resources required”.

During COP 26, Climate Home News recalls, developing countries pushed hard for recognition and funding for the overwhelming climate impacts that are already devastating their territories and draining their economies, looking for closure on an issue that has brought them “three decades of frustration”. The countries “demanded the creation of a fund to respond to the losses and damages caused by increasing climate impacts,” but ultimately “settled for a ‘dialogue’, co-chaired by the U.S. and Singapore, which runs until June 2024 and is tasked with discussing potential funding arrangements.”

But “rich nations have long sought to avoid any liability and compensation claims for their historic emissions and responsibility in causing climate change,” Climate Home explains, and so far, Denmark is the only developed country actively engaging on the issue. Others are trying to redirect the conversation to existing funding streams for development finance or aid.

“The Glasgow Dialogue appears to be a stand-alone dialogue with no clear destination,” said Antigua and Barbuda climate negotiator Michai Robertson, speaking on behalf of the Alliance of Small Island States (AOSIS).

That was after OXFAM published research showing an 800% increase in humanitarian appeals for extreme weather disasters like flooding and drought between 2000 and 2021.

But none of those arguments, nor even the repeat, dire warnings from the Intergovernmental Panel on Climate Change earlier this year, appeared to have shifted the momentum of the negotiations in Bonn. “While countries like Germany shop around for new sources of fossil fuels in the context of a brutal war in Ukraine, they refuse to commit to additional and scaled-up finance for communities that have done the least to cause this climate crisis and are experiencing unavoidable impacts even at 1.2°C,” Climate Action Network said.

“The hypocrisy and obstruction from rich countries in Bonn are deeply disappointing,” said Oil Change International Program Manager Collin Rees. “Mere months after key commitments in Glasgow by major polluters to phase out international public finance for fossil fuels, these same nations are aggressively pressuring African and other Global South countries to build long-lived fossil fuel infrastructure the planet can’t afford,” while “refusing to pay up for devastating climate-induced loss and damage. The gap between what’s being discussed and the bold action needed to phase out oil, gas, and coal and fund an equitable transition is larger than ever.”

“The EU should stop blocking progress on loss and damage and increase finance for adaptation,” said CAN-Europe Director Chiara Martinelli. “European countries also urgently need to massively ramp up their climate and energy targets, rather than displace oil and gas from Russia with those from developing countries, further locking them into fossil fuels. That’s what climate leaders should do.”

“Undelivered climate finance and action by rich countries are standing in the way of future action by all. Countries are falling back into old habits of holding one issue hostage to another issue dear to them. So when some countries block progress on loss and damage finance and responding to increasing impacts of climate change, others block progress on mitigation,” said WWF Head of Delegation Mark Lutes.

“So while we did not expect concrete outcomes at this meeting, it is already clear that the general lack of a sense of urgency, and the perennial conflicts and fault lines between parties, threaten the rapid progress we need this year and this decade,” Lutes added. “The process must lead to action, and urgency must be at the centre of all actions and processes if we are to have a successful COP 27 in Sharm el-Sheikh.”

“While developed countries acknowledged the need to deal with such damages, they rebuffed requests from vulnerable nations to work toward establishing a new funding mechanism,” said David Waskow, Director of International Climate Action at the World Resources Institute (WRI). “Perhaps the most decisive outcome from these talks is that developed countries now realize that the chorus calling for solutions to loss and damage is only getting louder and addressing this issue is a central measure of success for the UN climate summit in Egypt. Now the pressure is on for leaders to pick up the slack.”

“There is a terrifying disconnect between the real world and some rich country negotiators who live in safe bubbles and feel able to turn their backs on the rest of humanity,” said Teresa Anderson, Global Lead on Climate Justice at ActionAid International. With 20 million people in the Horn of Africa on the brink of famine, the EU and other rich countries “spiked the discussion about loss and damage at every single turn. Whether it was about setting up a new finance facility, providing funds, organizing technical support, or even just including the issue on the agenda for discussion at COP 27 later this year, rich countries continued to block, block, block.”

“We are facing what many leaders correctly term an existential threat, but the urgency of the actions needed to address that threat—by shifting away from fossil fuels to clean energy and helping vulnerable countries cope with mounting climate impacts—was not on display over the last two weeks here in Bonn,” said E3G Senior Associate Alden Meyer. “It is now up to leaders and ministers to muster the political will to take bold, collaborative action to respond to the climate emergency.”

WRI Research Associate Nathan Cogswell pointed to a long list of technical discussions that were kick-started during the Bonn meetings. On loss and damage, he said the G77+China, a negotiating bloc of developing countries, “were united here in their ask for an agenda item so they could bring it into the formal process,” with countries like Canada and New Zealand showing interest in advancing the discussion.

“The developed countries are recognizing and enhancing their understanding of the need for loss and damage finance, and it’s something they will have to work on in the coming months,” Cogswell said.

He added that vulnerable nations and civil society observers aren’t alone in their concern about the often glacial pace of the process—that problem, driven by the complexity of the COP process, “is an ongoing discussion among parties here,” he told The Energy Mix.

“There are a lot of people in the COP process, both civil society and parties themselves, who are quite frustrated with the lack of progress,” Cogswell said. While there’s value in a forum that includes voices like AOSIS and the Least Developed Countries (LDC) bloc, “there is still a lot of frustration with the speed of action and the sense that nice political words aren’t matching with action. It’s one thing to share good words, but you have to back them up and provide finance to implement effective climate policies.”

More from Mitchell Beer:
Trudeau Mandates Key Ministers To Be Bold and Ambitious on Climate
Backsliding on Climate: The World Was Right To Be Skeptical