Below 2C
Home Socio-Politico Banks Risks to Oil & Gas Finance Are Opaque: What Should Banks Be... 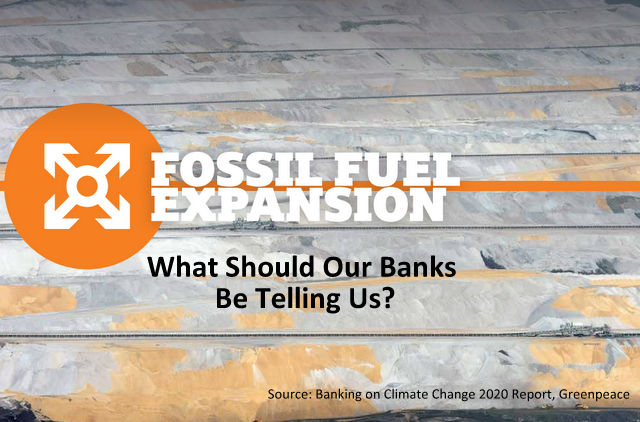 The just-released 2020 report on global fossil fuel financing by banks, Banking on Climate Change 2020, shows how the big banks are promoting the expansion of fossil fuels with more than US$2.7 trillion in direct investments since the 2015 Paris Agreement. This financial support has increased each year in spite of the need to curb the use of fossil fuels in order to avert the worst impacts of the climate crisis. “The business practices of the world’s major private-sector banks continue to drive us toward climate disaster,” says the report. (Editor intro)

(This article was first published as an opinion piece by Celine Bak in the Globe and Mail.)

What Our Banks Should Be Telling Us

This is a troubling time for anyone working in the oil and gas industry. Oil prices were already plummeting before the COVID-19 pandemic was declared thanks to Saudi Arabia’s decision to start a price war. The kingdom announced that it could ramp production up to 12.2 million barrels a day for the next year, increasing supply at the same time that global demand is falling and economies are preparing for extended shutdowns. A possible Saudi-U.S. alliance may be in the works to stem the bleeding, but there are risks there too.

Analysts have concluded that one-tenth of oil production is uneconomic in the current market. Producers such as Canada, Colombia, Venezuela that have more than half of production with marginal costs of greater than US$25 are at greatest risk. With months of economic slowdown, it is even possible that supply will exceed storage capacity. The pumps may keep going but with nowhere to store the product, oil prices could even become negative. We truly are in uncharted territory.

Finance Minister Bill Morneau has said that he is looking for measures to protect workers in the oil and gas sector, including proposals to clean up abandoned wells. That is a wise place to start: the priority needs to be providing financial support for workers and their families, and we can do so while also reducing a major environmental and economic liability.

RBC has been banking fossil fuels at $141 billion over the same period. This makes RBC the worst fossil banker in Canada, leading other Canadian banks by more than a third. — Banking on Climate Change 2020

However, more action will be needed in the coming weeks and months, and we must heed the lessons of the last financial crisis. The oil price problem will spread beyond the balance sheets of oil and gas companies. Around the world, banks lent US $2.8-trillion to oil and gas companies between 2016 and 2019. (To put that sum in context, it’s more than three times the size of the new bond-buying program announced by the European Union.) Canadian banks made 17.5 per cent of those financings, though our industry only accounts for about 5 per cent of global supply, meaning our country is particularly exposed.

To reassure markets, there are four things that governments and investors should be asking of bank management right now.

First, investors need to be informed of potential contagion. Low oil prices will affect loan repayment, so banks must disclose if their loans to oil companies are securitized or have any insurance outstanding. This is a hard-learned lesson of the 2008 crisis, when problems in one sector rapidly spread to others: recall the US$173-billion bailout of AIG, which could not honour the insurance it sold to cover the defaults of mortgage-backed securities.

Second, there must be clarity on the worst-case scenario for non-performing loans. Governments and investors should ask banks for loan-impairment reporting under multiple scenarios. These scenarios should include both depressed and negative oil prices that reflect realistic field-level costs of production over a period of at least 12 months, since we don’t know how long the downturn will last.

Third, governments must know if pension plans would be turned over to creditors as recourse for non-performing loans. That has been the case in past bankruptcy proceedings. Given the social strain on oil-producing regions like Alberta, workers’ pensions must be considered with great care, and the federal government should be ready to safeguard them.

Fourth, we should ask what loans a bank will make. As Canada prepares more monetary-and fiscal-stimulus plans, we need to ensure capital is going to those who will use it best. The EU can provide useful guidance here: it has rules for sustainable finance which, along with environmental requirements, prioritize lending to local economies. It’s those smaller local businesses who suffer the most in a downturn, so we should ensure that they benefit the most from stimulus policies. Banks will be part of that effort, so they should demonstrate the degree of diversification of their loan portfolios and their readiness to lend to sustainable businesses.

When it comes to answering these four questions, time is of the essence. More and more Canadian firms will come under pressure as the volatility in global oil markets continues. Now is the time for governments and investors to get disclosure from banks – before their loans are in trouble – to ensure that Canada is able to navigate through these turbulent times and invest in a sustainable recovery.

Céline Bak is the president of Analytica Advisors and a senior associate at the International Institute for Sustainable Development.