Have you ever stopped to think how your bank uses your money — your savings, investment certificates, retirement funds? Is your bank stepping up to the plate  to tackle the climate crisis (happening in deep time) and the corona crisis (happening in real time)? The answer to these questions will astound you. You likely will be angry and may feel compelled to take action. You may even want to Fire Your Fossil Bank like I’m doing. My bank over the last 4 decades was RBC—the Royal Bank of Canada.

First let me provide some context

In 2015, 197 countries signed the Paris Agreement which has a stated goal of holding the warming of the planet well below 2°C but aim for 1.5°C (Article 2.1.a). The agreement asks that governments at all levels, individuals, private industry, institutions, organizations and the financial world all do their part. Sadly that is not our reality.

Canada has pledged to reduce its emissions by 30% below 2005 levels by 2030. But that’s not going very well. The latest results are terrible. Our emissions trajectory is on the rise surging another 15 million tonnes in 2018. Canada produces more emissions per capita than any other G20 country.

What has that got to do with banks?

Like all of us and every other segment of society, banks have to be aligned with the Paris Agreement. But they are far from it. In fact it’s quite the opposite. In Canada, the five big banks are bad for climate.

The International Monetary Fund estimates the world is making an annual $5 trillion perverse bet against the climate by providing subsidies to fossil fuels. Gross over-investment—over 5% of global GDP—in high-carbon industries and lifestyles and gross under-investment—only 1% of global GDP—in clean technology is causing massive harm to our planet

The March 2020 Banking on Climate Change: Fossil Fuel Finance Report reveals the paths banks have taken since the Paris Agreement was adopted. It finds that, overall, bank financing continues to be aligned with climate disaster. Thirty five (35) global banks have funnelled an additional US$2.7 trillion in fossil fuels since the Paris Agreement (2016-2019) with financing on the rise each year.

Canada’s five big banks have combined assets of trillions of dollars with revenues over C$45.3 billion in 2018. They service close to 80 million clients worldwide. Large numbers of their clients are becoming increasingly aware and concerned about the climate crisis. They are seeking lifestyle changes—including how they do their banking—that will reduce their climate impact. They deserve to know what their banks are up to. And they deserve to know that their banks are financing fossils. 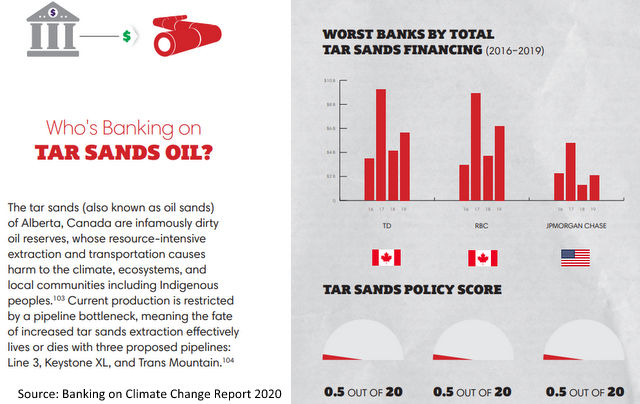 Between 2016 and 2019, Canada’s 5 Big Banks provided financing for nearly half a trillion dollars (482 billion) to the fossil fuel industry globally. And domestically, they hold close to 70% of the financing (69.8 billion) in the Tar Sands, one of the world’s dirtiest oil. Aside from JPMorganChase, they are the worst fossil bankers in the Tar Sands.

By providing the lion share of the money for Tar Sands expansion, our major banks are carbon majors and drivers of climate change — RBC (Royal Bank), TD (Toronto-Dominion), JPMorgan Chase, Bank of Montreal and CIBC (Imperial Bank of Commerce).

My bank, (Royal Bank of Canada) is the 5th biggest fossil bank in the world with US $141 billion in fossils, and the worst fossil banker in Canada according to the Banking on Climate Change Report 2020.

In an era of climate crisis, this is morally reprehensible and unconscionable!And for me it has become unacceptable. I decided to do something about it.

This video captures a presentation made on Finance Day of the recent We Don’t Have Time online no-fly conference. The speakers for the segment are Mohan Kumar and Roland (Rolly) Montpellier.

If my bank won’t divest from fossil fuels, then I will divest from my bank. Now, I’m only one of some 16 million RBC clients. How can #FireYourFossilBank have any impact? The simple answer: it only takes one person to start a movement and make a difference. History shows us that. And we can easily let ourselves be inspired by the mobilization of youth—led by Greta Thunberg— who are striking for climate around the world.

If you’ve read this far, then I assume you’re interested in looking into what your own bank does with your money. Please join me and many others who will use their bank accounts as a powerful weapon in telling the big banks to stop funding climate chaos. If enough of us move our money out of these banks, we can force them to become responsible corporate citizens and align themselves with their clients rather than the fossils.

I’ve started a Climate Alert directed to Canadian banks. I seek your help in putting our banks on notice. Please support the alert by clicking below and then on “Agree”.

Canada’s big banks have lobbied their way to a seat at the decision-making table of the government’s COVID-19 Just Recovery Plan. The banks are doing little to help their clients during the Pandemic and let’s not forget they are among the top investors in the climate-killing fossil fuel industry. We only have one chance to get this right.

Please join me and Sign this Leadnow Petition directed to Prime Minister Trudeau.