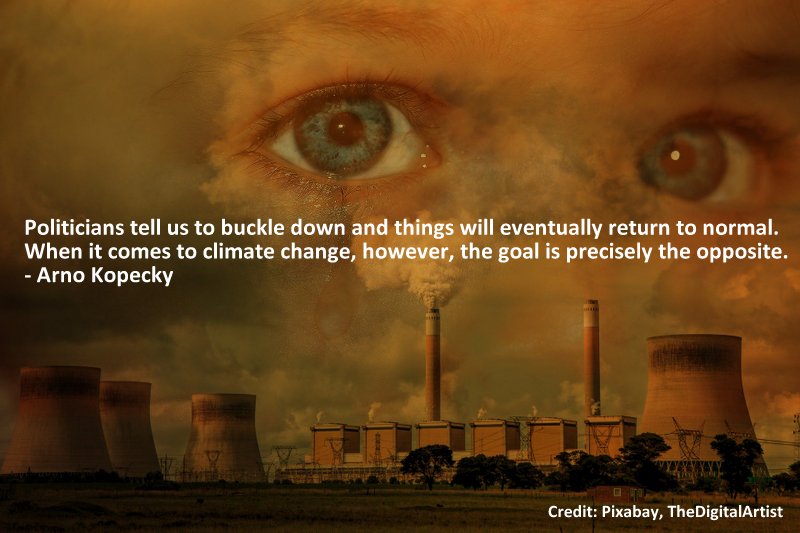 The way we are tackling the corona crisis is a rehearsal for how we might deal with the climate crisis which is just on our doorstep. The only difference is that “one’s happening in real time, one in deep time,” writes Arno Kopecky. Climate is a slow emergency, but in truth, it is far more serious and will be far more catastrophic than COVID-19 can ever be.

(This article was first published in The Tyee and is now featured in Below2C with the author’s permission.)

On Jan. 22, well before most North Americans grasped the magnitude of what lay in store, Johns Hopkins University launched a website to track the spread of COVID-19 around the world in real time. Now politicians, researchers, health authorities, and you can all log on to watch the virus eat its way through 184 countries. The global tally, far from flattening, is getting steeper by the hour.

By now the whole world has absorbed this pandemic’s lesson on the nature of exponential growth. Even in Canada, where case numbers remain comparatively low, the threat is palpable. We aren’t thinking of this crisis in terms of there or then or them. It is happening here, and now. To us. In real time.

The astonishing result — an abrupt and voluntary brake on the global economy, with corresponding drop in fossil fuel consumption — has given the environmental community much to think about.

To experience this crisis in real time reveals an evolutionary trait essential to our survival: a hypervigilance to immediate threats. But that visceral expression also hints at a corresponding blind spot: we regard slow-moving crises like climate change as somehow less than real.

Geologists have given us a term for that blind spot, “deep time,” referring to the time scale at which continents drift and mountains form. Ecosystems develop over the course of deep time, too; they can unravel much faster, but still too slowly to perceive with the naked eye. Except for the people who study such things, and so tend to see the world through time-lapse goggles, glaciers don’t melt in real time; sea levels don’t rise in real time; species don’t go extinct in real time. Never mind that unchecked climate change will kill millions more humans than COVID-19 — very few of them will die this afternoon. Those deaths and that vast chaos are therefore as unreal as this pandemic was, until it wasn’t.

None of this comes as news to environmental activists who have devised countless ways to trigger that sense of real-time urgency. From pipeline blockades to traffic-jamming street theatre, environmental protests operate in the realm of metaphor. They dramatize the slow death of an ecosystem, a species, or a people by accelerating it before our eyes. A single Trans Mountain protest evokes the extirpation of a pod of killer whales; members of a “Blue Wave” parade hasten sea level rise by marching through low-lying streets dressed as water. These tactics work, but in terms of reducing emissions they’ll never compete with a novel coronavirus. COVID-19 is, after all, not a metaphor.

That there should be an environmental upside to this pandemic — reduced pollution, decreasing emissions, suddenly abundant wildlife — is a delicate and even dangerous point to make. It runs the tone-deaf risk of appearing to celebrate mass death and pandemonium; that, in turn, validates the “eco-terrorist” label that has already made pipeline protests a criminal offence in seven U.S. states and, if Alberta’s Bill 1 makes its way into law, a Canadian province.

It’s also worth remembering that emissions reductions tend not to last when achieved by accident. “I have seen this before,” says Mark Jaccard, a contributing author to the Intergovernmental Panel on Climate Change’s reports, and a professor of sustainable energy at Burnaby’s Simon Fraser University, by email.

When the Great Recession struck in 2008, global emissions dropped for the first time in history. “There was a lot of talk about how the response to the financial crisis could be used to climate effect,” recalls Jaccard. But it was the automakers and fossil fuel companies, not renewable industries, that won the battle for stimulus spending. As soon as the economy recovered, emissions skyrocketed. The lesson, Jaccard says, is that all levels of society need to be engaged in the hard policy slog of decarbonization before a crisis strikes. “We also need to do this during the crisis. And we’ll need to do it after the crisis.”

The danger of romanticizing the present moment can also be expressed in moral terms; let’s not replace one suffering with another. As Rob Jackson, an environmental scientist at California’s Stanford University and chair of the Global Carbon Project told CBC: “We don’t want a Great Depression to be the reason for our carbon emissions drop.”

No, we don’t. But it bears stating that the reverse holds true as well: we don’t want our industrial assault on the biosphere to cause another Great Depression.

That is, however, precisely what is unfolding before our eyes. And that’s the crucial point: COVID-19 is a symptom of ecological decline.

A 2008 study published in Nature found that ecological destruction is largely responsible for fourfold acceleration in the emergence of new infectious diseases over the past century. The study identified 335 new diseases between 1940 and 2004, 60 per cent of which were zoonotic — they passed to humans from animals — including SARS, Ebola and HIV. The authors wrote that almost half the new diseases “arose from changes in land use, changes in agricultural and other food production practices, or through wildlife hunting,” all of which increase human contact with potential vectors.

Nature is, increasingly, sending us the kind of signals our species notices: forest fires, floods, droughts, hurricanes, and now, a novel virus. These things have always been with us, but their newfound frequency and scale reveal how the slow roll of environmental collapse is gathering speed. It is entering real time.

But there are key differences between any one pandemic and the global ecological collapse it palely foreshadows. Perhaps the biggest is that politicians can still credibly claim this crisis shall pass; that all we have to do is buckle down and weather the storm, and then everything can go back to the way it was. That is, explicitly, the goal. When it comes to climate change, however, the goal is precisely the opposite.

The goal is for civilization to change in radical ways so that our climate doesn’t. — Arno Kopecky

This pandemic has already taught us a great deal about how quickly the world can turn upside down. It sure feels novel. But it’s truly an old story, universally embedded in the myths each culture tells about itself, from Noah’s Ark to Sanskrit tales of Pralaya. At times like this, the myth gets real, fast.