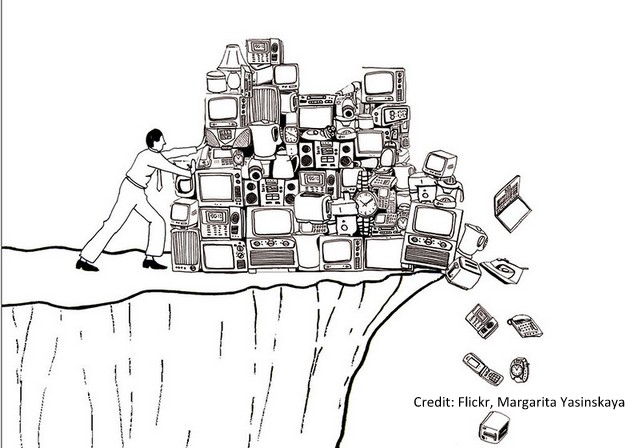 In a previous article, Brad Zarnett asks if “our ape brains are poorly configured to address a slow moving crisis with speed.” One might be quick to point out that the world is reacting with speed to the coronavirus threat. But then, COVID-19 is a real-time crisis and merits an immediate response. Climate change, on the other hand, is a slow emergency that does not “trigger a change in our climate-destroying behaviours,” says Zarnett. In this article, mass consumerism is exposed as the major roadblock that stands in the way of a future with a stable climate.

I used to be certain that government was failing us in our fight for a stable climate, and for the most part I still do, BUT thanks to COVID-19 I’ve gained new insight into the underlying roadblock that’s standing in our way.

There have been several polls lately about how people don’t want to go back to “normal” — how they’ve come to appreciate cleaner air, quieter roads and working from home. Sure…why not, it’s a poll — it’s not like you’re being asked to give something up or pay extra for your dream of a better future. So while we’re at it, let’s have Mondays off, free ice-cream and a baseball team that never loses.

To call these polls flawed is an understatement. To imply that a positive response says anything about people’s willingness to change is dubious at best. It seems to me that the value of a poll of this nature lies more in starting a conversation of how we can do better, rather than incorrectly concluding anything about our readiness to change.

It’s Not That Easy

Let’s face it, the “conveniences” and cheap products that we’ve come to enjoy are the reason why we have so much environmental destruction, and whether we like it or not, one way or another, we need to give them up. We don’t even have to take responsibility for our contribution to the harm — we can simply blame it on a billion dollar advertising industry and start our new eco-friendly lives tomorrow. Unfortunately it doesn’t quite work that way.

The first step in addressing a problem is admitting that you have one. We need to be honest with ourselves. We’re addicted to a whole host of planet-destroying products and “conveniences” that have been sanitized by a system that has done a masterful job of keeping the extent of the harm neatly hidden behind the curtain of capitalism. If the system wasn’t so dangerous we could sit back and marvel at the mastery of a business model that gives us just enough plausible deniability to “pretend’ to be blissfully ignorant. And for the most part, we’re OK with this.

Dear Climate: You Don’t Scare Us!

As a species we’re just not scared of Climate Change — it moves slowly, the worst impacts won’t be felt for decades and it will mostly affect other people in some distant developing country. It’s actually a perfect recipe for inaction. There’s no fear to trigger a sudden release of collective adrenaline guiding us all to take drastic actions and reject the “conveniences” that are destroying the planet.

The truth is that we’re not even close to admitting our addiction, let alone quitting. We would rather rationalize our behaviour and rally behind hopelessly ineffective strategies like the Paris Accords (COP) or the sham of CSR and ESG…rather than take the hard steps to get “clean”. And what’s worse is that due to decades of delay we’ve squandered the chance to solve this problem with incremental thinking.

Based on our track record, humans seem unwilling or unable to address climate change in a meaningful way…now it’s time to take a look in the mirror and ask: Does the problem lie with us? Brad Zarnett

Now let’s get back to the poll. Imagine that the question wasn’t some vague option for a better world but rather two direct questions.

Do you believe that the way we live our lives is incompatible with a stable climate and that urgent action is required?

What cheap products and “conveniences” are you willing to give up tomorrow to protect against the worst impacts of climate change?

Try it on a friend — you’ll most likely get silence or award winning rationalizations. Perhaps one of these:

“I tried being a vegetarian but it wasn’t for me.”

“I think it’s great that people take public transit, carpool or bike to work but it’s impractical for my job.”

“I think it’s great that people use reusable mugs and water bottles but I never know what my day will bring and I have so many things to carry already.”

“I think it’s great that there are people out there who repair their clothes rather than buy new but I like new styles and I’m not prepared to give it up.”

It’s as if they’re saying, I fully support that we should give up environmentally destructive behaviours…as long as it doesn’t inconvenience me. And with a little more digging you learn about how they could give it all up anytime but they don’t think it will achieve anything or how they need to fly for work or perhaps this oldie but goodie — yes I do drink bottled water but I always recycle.

COVID-19 and The Economy

It’s interesting to see the similarities between those who answered in the poll that they don’t want to go back to “normal” and those who are beating the drum to restart the economy.

One group isn’t quite ready to give up their conveniences BUT they’re all-in when it comes to others doing it. And the other group (those with the power in society) want to get the people back to work…as long as it’s not actually them or their kids who are putting their lives in danger on the front lines. In both cases…it’s good for others to do it.

The lie of Capitalism is that we can technofix our way out of our current dilemma. We can keep the profits coming and we’ll figure it out as we go, after all, that’s the way we’ve always done it. But this time it’s different — the clock is ticking and our challenges are literally…everything.

We need to change our entire transportation system, manufacturing processes, farming methods and electrical grid in 10 short years and even that doesn’t guarantee that we can keep the planet from exceeding 1.5 degrees of warming. If you haven’t noticed, rainforests continue to be cut down at an alarming rate and the Arctic is melting and absorbing more heat by the day. We don’t have the luxury of time — the crisis has already begun.

So what’s it going to be? What are you willing to give up in the post COVID-19 world? Well…that’s actually a trick question because it doesn’t really matter. Reducing the impacts of climate change isn’t about individual products or services. Stopping to produce plastic bottles or coffee cups or carpooling to work or even riding your bike won’t actually make a difference…because climate change isn’t a problem that can be solved individually in the marketplace. It’s a global societal problem that can only be solved with government leadership.

So what was the whole point of discussing the idea of giving up products? The point is, that we need to be prepared or better yet, at peace with giving up all of those wasteful and polluting activities. All of them! Only then will we be ready to vote for the type of government that will strategize, plan and budget around climate protecting programs and policies.

This point cannot be overstated; expecting society to vote for a Green Leader, before the majority of us have come to peace with the end of our addiction to the “perks” of Capitalism…is a pipe dream. It’s in direct conflict with our individualistic capitalism soaked brains and furthermore, most voters don’t want to be treated like children and told which of our “rationalized addictions” can no longer be enjoyed…and I don’t blame them. 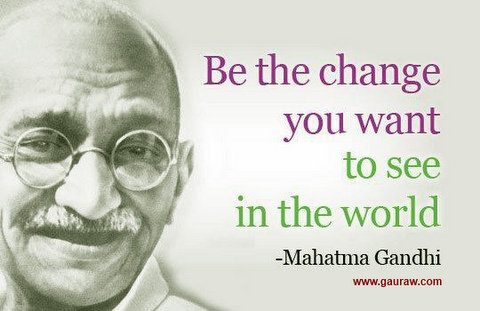 Every country on this planet has had a “green” option to lead their governments through the climate crisis but for the most part we don’t choose them. We tend to choose Liberals or Conservatives that tell us half truths and who see the world through the lens of business rather than the lens of life — and we can see where that’s gotten us. So here we are…what now?

It’s simple to say but very hard to do…our species needs to have a collective awakening and to find peace with walking away from our addiction. This has to be the first step, and who knows…it just might lead us to happier lives.

Gandhi was right — you need to be the change that you want to see in the world.

(This article was previously published in Medium).

ICYMI:
Why You Must Fire Your Fossil Bank
G20 Countries Are Still Digging – Canada Leads in Per Capita Support of Fossils