Below 2C
Home Climate Climate Crisis Shift:Action – From Fossils To Zero-Carbon On Pensions 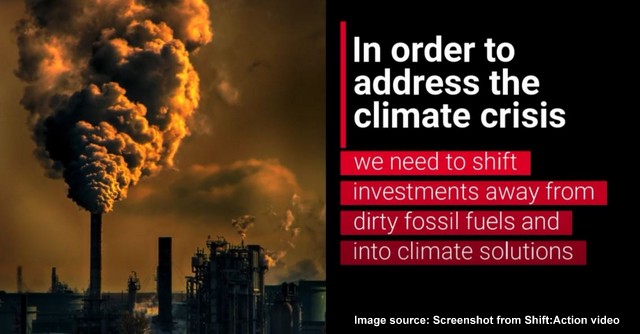 “Canada’s top ten pension funds alone manage over $1.5 trillion. How these funds invest your retirement dollars is a major factor in how quickly we can transition to a low-carbon economy while growing your pension in a warming world. The decisions of pension funds influence whether businesses in Canada and around the world build electric cars and solar panels, or diesel engines and coal-fired power plants.” Source: Shift: Action for Pension Wealth and Planet Health.

Shift: Action for Pension Wealth and Planet Health is a new organization that seeks to engage with Canadian pension funds on ways to solve the climate crisis. Canadians need to understand where their retirement money is invested and how their investments can cause climate destruction. Only then can we can begin to shift our approach and invest in a low-carbon future.

During a recent interview featured in The Energy Mix, Director of Shift:Action Adam Scott fielded a series of questions from interviewer Mitchell Beer. Some of his responses are quoted below:

“If you’re a pension beneficiary, you carry real power. They’re ⌈fund managers⌋ investing your hard-earned retirement savings. You worked your whole career to save that money, it’s there for your retirement, and they have a fiduciary duty—which is a legal obligation—to invest that money in your long-term best interest. So it’s really important that they listen to what you have to say about your pension, and we advise that it’s best to ask smart questions, then follow up on the responses you get. That engagement leads the funds to understand what beneficiaries expect, and what their best interests actually are.”

“One of the best ways to have an impact in this crisis is to make sure the funds that are invested on your behalf are invested in solutions to climate change, not in the problem. There’s a tool on our website that makes it easy for all Canadians to send a note to their pension funds asking what they’re doing on climate risk and how they’re investing. You can also put some of those questions to your financial advisor and your bank. It’s really important to ask: am I invested in fossil fuels? And am I invested in the opportunity in climate solutions? That’s a simple step every Canadian can and should take.”

The following video highlights how our pension funds may not be secure in a climate-constrained future:

Your Pension is at Risk from the Climate Crisis
Mar 12, 2020
Standard YouTube License

Canadian pension funds need to do more by following the example of leading funds such as Norway’s Sovereign Wealth Fund ($1trillion) which has announced it will “phase out oil exploration from its investment universe.”

The investment board responsible for managing Canada’s Pension Plan of $400 billion does not consider global warming when investing our pension money according to a 2019 report by the Corporate Mapping Project and CCPA of British Columbia.

“As one of the largest investors in the country, they have a significant role to play in facilitating the needed energy transition and our report shows, unfortunately, they are not fulfilling that role at the moment,” James Rowe (one of the authors of the report) told The Narwhal. “To stay within 1.5 degrees, these companies can extract only 71 billion tonnes of carbon dioxide, yet the companies the CPPIB is invested in have 281 billion tonnes in reserve, meaning they have almost four times the carbon reserves that can be sold and ultimately burned to stay within 1.5 degrees.” Their risks of holding stranded assets represent a very real liability for pensioners.

ICYMI:
Why You Must Fire Your Fossil Bank
The Stranded Asset Parade Is Starting