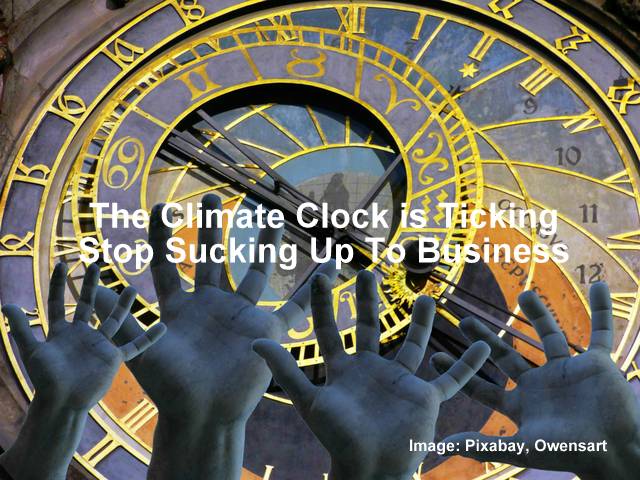 The climate clock is ticking—getting closer and closer to midnight. We need an all-hands-on-deck strategy to tackle climate change and avert the catastrophic consequences of a warming planet. The corporate sector is part of the solution and governments must stop sucking up to business.

This is the first of three posts by Brad Zarnett, a Canadian sustainability strategist, writer and speaker. He is the Founder of the Toronto Sustainability Speaker Series (TSSS). The full article can be found in Medium as “Sucking Up to Business is a Certain Path to Ecological Collapse.”

The Climate Clock is Ticking

What are they to do?

What’s the responsibility of a sustainability professional who knows that their employer (or client) is using their wealth and corporate influence to mislead the public with an alternate environmental reality — one that downplays the urgency to act and where half measures and inconsequential efforts are spun as meaningful?

If the climate clock wasn’t ticking, maybe it wouldn’t matter, but it is, and once we pass the threshold — there’s no going back or starting at a new normal. It will be a steady descent into systems failure, food scarcity, political chaos, and suffering.

There are two types of progress in the battle to protect our climate: positive and meaningful, and the distinction is crucial. A positive result is one that no matter the degree, environmental harm is reduced. A giant clothing company that switches to organic thread would be considered to have made a positive change. Proponents of this approach will praise the incremental effort and assert how every little bit helps or at least that it’s a positive step that can be built on. Those responses ignore our looming reality.

A meaningful result is different. It could be described as a dramatic reduction or the complete elimination of harm being unleashed on an ecosystem; and transferring harm from one place to another that is slightly less harmful is not a win and certainly not meaningful. I’m hard-pressed to find any sizeable corporation that operates in this way, other than everyone’s favourite — Patagonia and possibly IKEA. But these corporations are still causing far too much harm considering the desperate climate challenge that lays before us. And the closer you look, the more disturbing it becomes.

More than most, people involved in sustainability understand the science of climate change and that our carbon budget will expire in less than 10 years. Furthermore, they also likely understand that continuing to degrade ecosystems will only make matters worse. Today’s heatwaves, droughts, forest fires and floods are not a new normal; it’s a stark warning of our slide into climate chaos and large scale global suffering. One degree of warming will become two and then three and we need to clearly understand that two is not twice as bad as one — it could be 20 or 200 times worse. Positive feedback loops are nearly impossible to predict but their impacts are coming and they will shake every life supporting ecosystem on the planet.

If we could do anything we want to make the world a better place, I’m sure that each of us would have dozens of ideas but for now let’s come down from the clouds and explore this challenge from the real world.

Let’s assume that internally a sustainability professional is using all of their skills and influence to lobby for positive change. That’s a good start, but the harsh truth is that in most cases they’re fighting a losing battle; their voice is lost in a sea of pro-profit sentiment. At bonus time most companies reward employees based on increasing profits, not on reducing environmental harm or building a new less harmful business model that has new costs associated with it. (If you know of a company that significantly rewards employees based on meaningful sustainability metrics then please let me know.)

I get it — you need your job. You need to provide for yourself and your family and you may even be paying off student debt. Ultimately you’re tied to the system — we all are. If you speak out you may get alienated at work or you could even get fired which could make it very tricky to get another job utilizing your special skill set. (Although in some cases it might be the perfect resume builder.)

To some degree this is all true, so you don’t call out your own company (or client) and instead you convince yourself that you’re doing some good from within — but is that really true? Can you really fight against a predatory system that is ruled by short term profits and ecological destruction by working with a company that strives to achieve short term profits and ignores ecological destruction? And once again, please don’t tell me how every little bit helps or at least it’s a positive step which we can build on. Those responses ignore our looming reality. Let’s use Coca-Cola as an example.

This summer Coca-Cola Europe announced the replacement of plastic for “6 packs” with the CanCollar paperboard packaging solution. Coca-Cola considers this a sustainable and recyclable solution that is “set to keep” more than 18 “tonnes” of plastic from ending up in the world’s oceans each year.

This might sound impressive, but keep in mind that Coca Cola is the largest plastic polluter in the world and produces 3 million tonnes of plastic packaging each year. So while 18 tonnes might sound like a lot, it’s actually just a tiny fraction of all the plastic that they produce; 18 out of 3 million is a reduction of just 0.0006%. Framed honestly, as a relative reduction, the efforts of Coca Cola are inconsequential at best and misleading at worst. Perhaps this is why Coca-Cola spends approximately 4 billion each year on advertising.

There is essentially no meaningful regulation on plastic pollution (or carbon for that matter) and regardless of what Coca Cola says about sustainability, sales come first, before societal and environmental wellbeing. According to their long time Director of Sustainability, Bea Perez, getting rid of the plastic bottle is a non starter as, “it could alienate customers and hit sales.” Hmmm, sounds a lot more like the Director of Marketing than Sustainability.

In effect, Coca-Cola is saying that they refuse to change their business model in a way that could dramatically reduce their use of plastic and they’re blaming it on their customers.

I suppose that if a company doesn’t have to pay for the harm that they cause and they have no real moral compass for societal wellbeing, then it makes sense to lobby against any meaningful change and resist finding a new way to sell their product.

If you incentivize a system to cause harm… then don’t be surprised when it causes harm. — Brad Zarnett

I can understand why those employed at Coca-Cola would gush over these meaningless efforts but what about the rest of us who don’t work there and who can see this whole charade for the hoax that it is. What’s our responsibility to the truth? Is there harm in providing a little visibility for yourself by posting a trite congratulatory platitude on social media?

It may only be a quick comment, but it’s dangerous. It gives energy to a deceptive tactic and creates confusion and dialogue where none should exist. But perhaps even more insidious is that it pacifies us. It makes us think that someone else is on the job tackling climate change and that’s dangerous because it lulls us into a state of complacency, when instead, we should be out in the streets demanding change.

At this point, it might be helpful to reflect on exactly what drives a corporation to behave the way it does. Simply put, they are sociopathic entities that exist in an increasingly deregulated economic system that entices them to exploit people and resources in their quest to accumulate as much capital as possible. Unless you think that corporations can be reasoned with or coaxed to do better, then placating them is not the answer. And knowing that your encouraging comments could be doing more environmental harm than good is probably reason enough to stop doing it.

Click here for Part II of Sucking Up To Business: Playtime Is Over

Click here for Part III of Sucking Up To Business: Time for a Gut Check

ICYMI:
Shift:Action – From Fossils To Zero-Carbon On Pensions
What On Earth Is Blue Carbon?