Below 2C
Home Socio-Politico Economy Support For a Dying Industry Or a Just Green Transition: You Can’t... 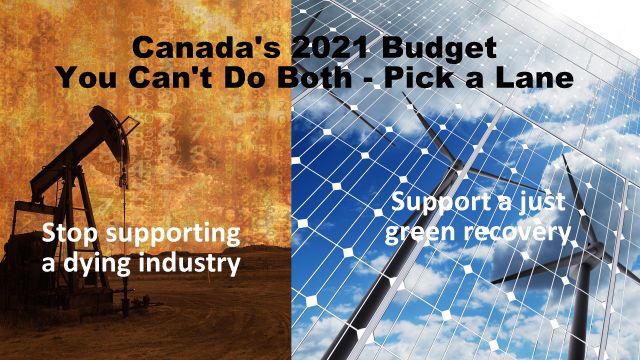 Finance Minister Chrystia Freeland is set to present her first federal budget within the next few weeks. This pandemic recovery budget offers an opportunity to shape the future more than any previous budget in recent memory. Freeland’s fall economic statement pledged to “build back better” but it remains to be seen if the Liberal government will truly transition to a clean green future or continue to support the dying oil industry.

(This article by Mitchell Beer of The Energy Mix was previously posted in Policy Options.)

You Can’t Do Both

When she tables a much-anticipated federal budget later this year, Finance Minister Chrystia Freeland mustn’t pass up the opportunity to revisit and rethink a bedrock assumption of Canadian economic strategy: that the country’s prosperity stands or falls on the fortunes of its oil and gas industry. It’s time for the federal government to stop trying to do two things at once, and instead pick a lane.

With the global economy transforming and decarbonizing at a stunning pace and the climate crisis deepening, an emerging body of research shows the country is far less dependent on fossil-fuel production than policy-makers might assume.

That means the Trudeau government can finally abandon a complex, self-defeating strategy of trying to have it both ways. It introduces annual carbon tax increases and pledges to legislate net-zero emissions on one hand, buys taxpayers a dangerous 68-year-old pipeline on the other while tripling fossil fuel subsidies in the midst of an economic crisis and succeeds at convincing no one that the two sets of policies can support each other.

The deadline to do better is looming. With the European Union committed to a pandemic recovery package leading toward a 55 per cent carbon reduction this decade, China pledging to peak its emissions before 2030, and the Biden administration putting climate action at the centre of its economic agenda, Canada is on the verge of being left behind in the race to a prosperous, clean tech future.

Pop quiz: if you had to name an industry that accounts for less than one per cent of Canada’s direct employment, produces just one job-per-million-dollars invested compared with as many as 8.6 across the economy, is a significant job creator in just 18 of the country’s 152 communities, and could be comfortably phased out over a 20-year span…would you pick oil and gas?

Turns out you could, and probably should.

In mid-January, former Unifor economist Jim Stanford reported that payroll employment in fossil fuels fell by 33,000, or 17 per cent, between 2014 and 2019. Over that time span, other sectors created 42 new jobs for each one the fossil industry offloaded, showing that “normal churn in the job market swamps changes in fossil fuel jobs.”

The industry dropped another 17,500 positions in the 12 months concluding last September due to cratering oil prices and the economic paralysis of the pandemic.

But “unlike other sectors,” said Stanford, director of the Vancouver-based Centre for Future Work, “few of those lost fossil fuel jobs will ever come back – even after health restrictions are eased.”

This might sound like news, but it’s actually a sequel to a story the industry has been telling for years. In February 2015, Steve Laut, then-president of Canadian Natural Resources Ltd., told a Chamber of Commerce audience his industry faced a “death spiral” unless producers could get a break on the “made in Fort McMurray cost” of doing business. Since 2017, the industry has been intent on “de-manning” its operations as fast as it can. In other words, using artificial intelligence including robots to do the work once done by humans.

The industry is losing ground so fast that government revenues from oil and gas accounted only for 0.3 per cent of GDP between 2015 and 2019, the U.K.-based Carbon Tracker Initiative reported last month. Canada didn’t even make Carbon Tracker’s list of the 40 countries most vulnerable to lost taxes and royalties as decarbonization accelerates and the fossil industry declines.

Canadian governments do stand to lose more than half of their oil and gas-related income through 2040, and nearly nine-tenths of what the fossil lobby claims they’ll collect. But the economy is already diversified enough that those losses represent “such a small share of the total,” said Carbon Tracker analyst Axel Dalman.

The industry’s decline should open political space for Freeland to write a budget that takes the country where most Canadians want it to go. The throne speech last fall pointed in that direction.

But Ottawa won’t do the best job it can of building a new, prosperous, decarbonized economy if it remains fixated on keeping the old one on life support. Every dollar wasted on emerging fossil fuel technologies is a dollar that could have been productively allocated to genuine green solutions that are already practical, affordable and surging in other countries.

Yet much of the government’s time, attention and political capital is still devoted to the fossil economy, drawing focus away from the investments the country actually needs.

A report in February showed Canadian fossil fuel subsidies more than tripling last year. Beyond the $1.9 billion they could quantify, researchers cited nine non-tax subsidies for which no cost figures were available.

Ottawa set aside $320 million in subsidies for East Coast oil and gas projects, even as the industry curtails its own investment plans.

The government is under sustained pressure to open up a new fossil fuel tax credit that would help companies use carbon-capture technology to extract more oil from depleted wells. The technology is marginal, serving mostly to support overheated claims that fossil fuel burning can be “net-negative” for carbon.

UN Secretary-General António Guterres called it a “red alert for our planet,” putting governments “nowhere close to the level of ambition needed to limit climate change to 1.5 degrees.”

All of this is happening with governments around the world on a tight deadline to cut global greenhouse gas emissions 45 per cent by 2030. At the end of February, the United Nations reported that the effort is not going well, with the most recent round of climate action pledges pointing to just a 0.5 per cent reduction this decade.

“The message is extremely clear,” agreed UN climate executive secretary Patricia Espinosa. “We are collectively wandering into a minefield, blindfolded. The next step would mean disaster.”

Canada’s contribution so far has been to triumphantly replace its Harper-era commitment to a 30 per cent carbon cut with a promise of fractionally more than 31 per cent. (Is anyone cheering yet?)

Canada’s transition out of fossil fuels won’t be easy, and it won’t happen overnight.

But charting a different future begins with seeing that it might be achievable. For federal decision-makers, that begins with recognizing that the walls won’t cave in if the fossil industry goes into a managed decline because the wider economy isn’t nearly as dependent on oil and gas as they might have thought.

The details in Stanford’s analysis add important texture to the national numbers. There are 18 communities in Canada, 12 of them in Alberta, that depend on oil and gas for at least 5 per cent of their direct employment. If Ottawa is serious about a transition that leaves no one behind, the budget should focus on industries that are already bringing new job options to the table but may not survive in a province that is far more intent on diversifying its fossil fuel product lines.

And here’s another number that should fuel some creative thinking at the Department of Finance: surprisingly, Stanford reported that 56 per cent of oil and gas jobs are located in cities. That means a large slice of the fossil work force will have access to a wider menu of well-paid jobs than they would in a single-industry resource town. Particularly if governments step up with training and transition funding.

But stepping up means making a choice.

For half a decade, the Trudeau government has tried mightily to sustain a climate and energy strategy that drives down both sides of the road. Now, the two lanes are beginning to diverge. The budget gives Freeland an opportunity to pick the right one.

ICYMI:
100% Solar, Wind, and Batteries is Just the Beginning
A Just Transition To Clean Energy