Below 2C
Home Socio-Politico Banks When Will My Bank (RBC) Divest From Fossil Fuels? 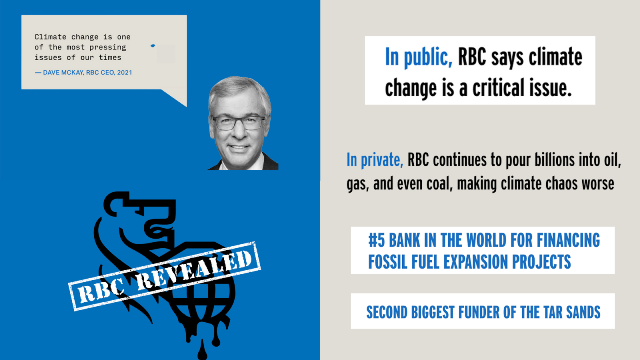 Did you know that there are roughly 7.5 million grandparents living in Canada? And many, like Lorraine Green (and myself), have become climate activists, deeply concerned about the legacy we will leave our grandchildren. We know that we’re in a climate emergency that threatens their future and we ask why our governments and institutions are not acting on climate with the urgency that is needed. We’re leaving no stone unturned and we’re questioning many of our life choices including the way we do our banking. In a letter Lorraine is asking RBC, her bank and former employer, when it will divest from fossil fuels.

In 2020, I learned that RBC, my former employer and bank of over half a century, is one of the world’s leading funders of fossil fuels and a grave threat to the survival of my five grandchildren and two great grandchildren.

In the four years since the Paris Climate Agreement was signed in 2015, RBC and Canada’s four other major banks – TD, Scotia, BMO, and CIBC – have allocated more than half a trillion dollars to fund an industry that is playing Russian roulette with our children’s and grandkids’ lives. As a former employee for 24 years, and still an RBC customer, I was shocked and angry to learn that my bank was #5 on ‘The Dirty Dozen’ list of 35 of the world’s top private banks financing fossil fuels, thus accelerating the climate crisis.

The latest Banking on Climate Chaos Report just released shows RBC is still the largest funder of fossil fuels in Canada and still 5th largest in the world, financing C$208 billion since the Paris Agreement was signed in 2016, including C$79 billion in fossil fuel expansion projects. 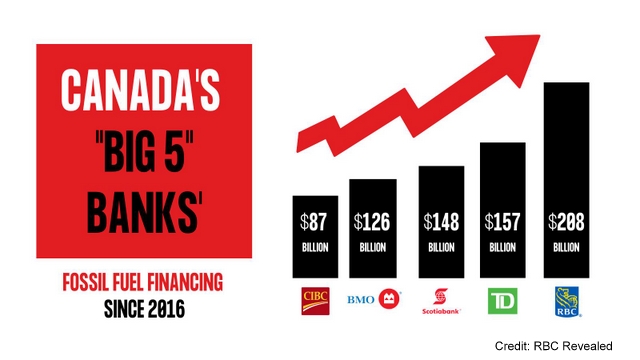 GASP (Grandmothers Acting to Save the Planet) members decided we absolutely could not stay silent. While others focused on TD and Scotiabank – also in ‘The Dirty Dozen’ cluster – I concentrated on RBC.

We proceeded with letters to bank CEOs and their boards late last summer, and RBC’s response to my concerns was dismissive at best. Its initial email reply wasn’t even signed, and my questions went completely unanswered. Instead, I got vague environmental pledges and boilerplate statements about RBC’s environmental leadership.

In mid-November 2020, TD announced a new ‘climate action plan’ pledging to achieve ‘net-zero’ greenhouse gas emissions associated with both its banking operations and investment activities by 2050. While TD’s plan is vague, and details are unclear, it was a signal that at least one major Canadian bank was responding to the growing catastrophe of climate change, and to our concerns.

In mid-December, GASP members mailed 1000 handwritten postcards to all of the Big Five Banks urging them to stop funding fossil fuels. Our small GASP team was persistent enough to land a Zoom meeting in late January with three mid-level RBC employees on the bank’s sustainability team.

While the meeting was cordial, there was little acknowledgement of the bank’s role in the accelerating climate crisis. But there were strong hints that RBC was about to unveil its own climate plan, which it did in mid-February. It was much the same as TD’s – net-zero emissions by 2050, and it did pledge $500 billion in low carbon loans by 2025. But like TD, no pledge of specific short-and medium-term targets to align with the Paris Climate Agreement.

While all five of the Big Five banks are accelerating global warming with their fossil loans, RBC leads the pack. And the deeper we dove into my bank’s track record, the worse things got. In addition to landing at #5 on ‘The Dirty Dozen’ list of private banks funding fossil fuels in 2020, RBC was among the top 20 global financiers of 12 proposed mega-fossil projects named in Five Years Lost: How Finance is Blowing the Paris Climate Budget, December 2020. RBC also ranked as the twelfth largest lender to coal projects, according to the 2020 Global Coal Exit List. And earlier this month, RBC landed at #7 of the top 10 global financiers triggering deforestation in the food supply chain (Forestry 500: ranking the Most Influential Companies Driving Tropical Deforestation).

RBC’s Annual General Meeting is on April 8. I challenge my bank to become a world leader, by making genuine pledges and setting divestment targets that give my grandchildren their best possible chance for a liveable future.

Mark Carney, former governor of the banks of Canada and England, and special envoy on climate action and finance to the UN, believes that “The transition to net-zero emissions is creating the greatest commercial opportunity of our age.” How fast we get there is critical, and Swedish climate activist, Greta Thunberg, stresses the urgency: “We shouldn’t be focused on dates 10, 20, or even 30 years in the future. If we don’t reduce our emissions now, then those distant targets won’t mean anything because our carbon budgets will be long gone.”

So, what can customers of the Big Five Canadian banks do? As in my case with RBC, write or call your branch manager and ask where your money is being invested, specifically about fossil energy, and how the bank plans to align this decade with the Paris Climate Agreement. If you are not satisfied with the answers, consider moving your account to a financial institution that doesn’t fund fossil fuels, and tell your bank why.

I have recently opened an account at a credit union and have begun the process of moving my accounts away from RBC.

Lorraine Green is a grandmother, advocate for social justice and gender equality, a climate activist and Co-Chair of GASP (Grand(m)others Act to Save the Planet). You can connect with her on Twitter, @lorraineagreen

You can find the tools and information needed to #FireYourFossilBank at these links:
The Fire Your Fossil Bank campaign
Tools to Move Your Money