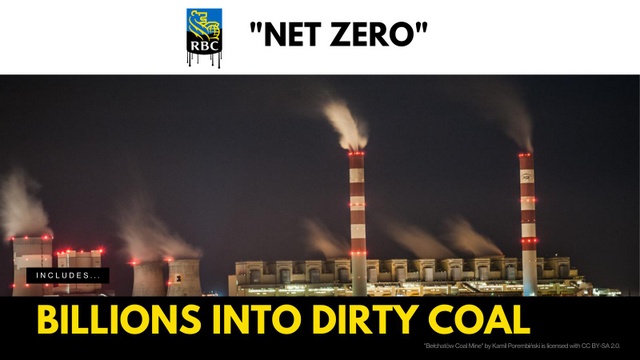 On the same day a new report showing that Canada’s banks are among the ‘Dirty Thirty’ lenders to the global coal industry, RBC—Canada’s largest bank—announced it’s adding $500 billion to its sustainable financing funds while also committing to net-zero carbon emissions lending by 2050. The RBC announcement was clearly meant to deflect attention away from the damning report but many of its clients are left asking why Canadian banks are still financing coal as the world struggles to become Paris-compliant by 2030.

The following is a press release issued by Shift Action exposing Canadian financial institutions as members of the “Dirty Thirty” and an accompanying tweet targeting four of Canada’s big five banks.

February 25, 2021 – Canadian financial institutions are some of the largest financiers of the global coal industry, according to the 2020 Global Coal Exit List, new financial data released today by German non-profit Urgewald.

The analysis shows that, five years after the Paris climate agreement, global financial institutions, including Canada’s largest banks, asset managers and insurance companies, continue to finance the growth of coal in the midst of a worsening climate emergency.

“It demonstrates a fundamental lack of climate literacy from the Canadian financial community. We need to rapidly phase out coal mining and power generation.” — Adam Scott, Director, Shift Action

“It is simply unacceptable for Canadian financial institutions to be funneling billions of dollars to the coal industry in 2021, when the climate crisis is already harming people, economies and ecosystems around the world,” says Adam Scott, Director of Shift Action for Pension Wealth & Planet Health.

In particular, four Canadian banks are among the “Dirty Thirty,” the top 30 lenders to the global coal industry between October 2018 and October 2020, including:

The ongoing financing of the coal industry by Canadian financial institutions comes as over 151 large banks and insurers have already blacklisted coal. Meanwhile, Canada’s federal government itself has committed to phase out coal-fired electricity domestically by 2030 and leads the Powering Past Coal Alliance to phase out coal-fired power internationally.

The 2020 Global Coal Exit List is the first time in history that anyone has attempted to analyze commercial banks’ and institutional investors’ exposure to the entire coal industry, covering financial flows to 934 companies. The analysis covers investments in and lending and underwriting for coal companies and projects by banks, asset managers, pension funds and insurance companies over a two-year timeframe beginning in October 2018, when the International Panel on Climate Change warned that limiting global heating to 1.5°C would require global carbon emissions to fall by at least 45 per cent below 2010 levels by 2030 and reach net-zero by 2050.

The United Nations Environment Programme’s 2020 Production Gap report recently found that in order to follow a 1.5℃-consistent emissions pathway, between 2020 and 2030, global coal production must decline by 11% per year.

Find the international press release from Urgewald and our international partners, as well as complete data and methodology behind the 2020 Global Coal Exit List data set here.

ICYMI:
Your Pension Money – Fossils or Climate Solutions?
Say NO to Your #FossilBank – It’s Time To Move Your Money