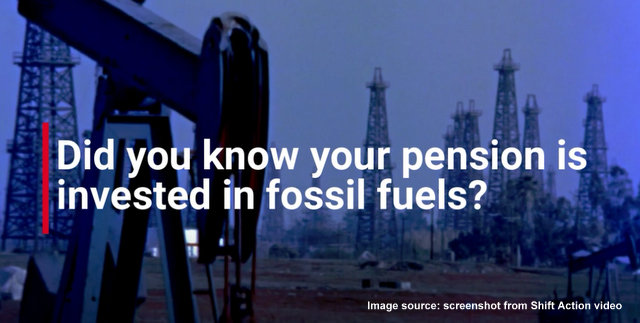 More and more retirees are asking how their pension plan is investing their retirement savings as the climate crisis becomes a reality. This is now a critical question for many. Ensuring a healthy planet for our grandchildren requires ambitious climate action. Read how three retired teachers, Linda Middaugh, Kathy Mason and Marilyn Ortwein, are telling their pension plan to stop fuelling climate chaos with their pension money.

We are three retired Ontario school teachers. We are also proud grandmothers of 23 pretty amazing grandchildren.  But inside these two joyful realities lies a deeply distressing problem, and we’re both frightened and mad as hell about it.

In a word: pensions. We all recently learned to our profound alarm – and yes, anger – that the Ontario Teachers’ Pension Plan (OTPP) has invested a sizeable share of our savings in fossil fuels.

Even very young school children now know fossil fuels are big trouble; that burning coal, oil and gas is the leading cause of the world’s climate crisis, and a grave threat to their own survival.

After decades doing our best to give young people the knowledge and skills to create a positive future for themselves – and a better world for all of us – we discovered our retirement nest-egg is fueling their worst nightmare.

In January this year, with much fanfare, our $205 billion pension fund announced its commitment to ‘net-zero greenhouse gas emissions’ by 2050. This is a truly worthy objective, and one being adopted by many organizations and governments around the world in the race to avoid the worst impacts of climate change. But the devil is in OTPP’s absence of details: There are no transparent timelines, targets or plans to get to this net-zero goal. And not even a vague hint about how it will part with an estimated $8+ billion in fossil fuel investments.

A Message for Ontario Teachers :

What is most chilling is OTPP’s lack of urgency. This decade, 2020 to 2030, is literally do or die. UN climate scientists warned back in 2018 we must cut global greenhouse gas emissions in half by 2030, or reap increasingly dire climate consequences thereafter. Or as Sir David Attenborough aptly puts it: “What we do in the next ten years will profoundly impact the next few thousand.”

Since we three retirees only recently discovered this, we wonder how many others – there are more than 300,000 active and retired elementary and high school teachers in Ontario – realize that our pension fund is speeding up climate destruction. Not enough, we fear, but a growing number of teachers are becoming vocal and active, thanks to campaigns by groups such as Shift:Action, which also targets CPP, the Canada Pension Plan, itself laden with fossil fuel investments.

There have been positive changes elsewhere, with two teachers’ pension funds recently announcing fossil fuel divestment. One is the $77.4-billion (US) New York City Teachers’ Retirement System; the second, a Danish plan for early childhood educators which – among other actions – has blacklisted 144 fossil fuel companies that don’t have detailed and timely plans for cutting carbon emissions.

Pension Plans can make a difference 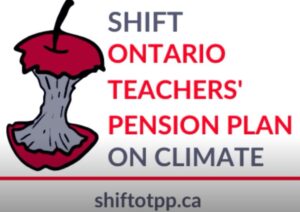 Can pension plans make any real difference when it comes to restoring climate stability? A good question, and the simple answer is yes. Huge. The $50 trillion invested by pension funds globally – together with the $300 trillion in the world’s capital markets – can not only tackle the climate emergency head on but can and must be game changers.

“Canada’s ten largest pension funds alone manage $1.9 trillion – nearly as much as Canada’s annual GDP,” says Adam Scott, Director of Shift:Action. “Decisions over whether this capital is invested in causes of the climate crisis, or in the solutions, are critical to achieving safety for our savings and the planet.”

And definitely for our grandkids too.

How to get involved

Here are three ways you can make a difference:

Be a hero to your children and grandkids, and ours too. We cannot fail them. Their fate, and everything else we so deeply love and cherish, depend on our actions now. Please help.

More on Finance:
Shift:Action – From Fossils To Zero-Carbon On Pensions
When Will My Bank (RBC) Divest From Fossil Fuels?
Most Politicians Don’t Get the Climate Crisis But Parents Do