Below 2C
Home Climate Climate Crisis Is COP26 the Answer We’ve Been Waiting For Or a Dangerous Fantasy? 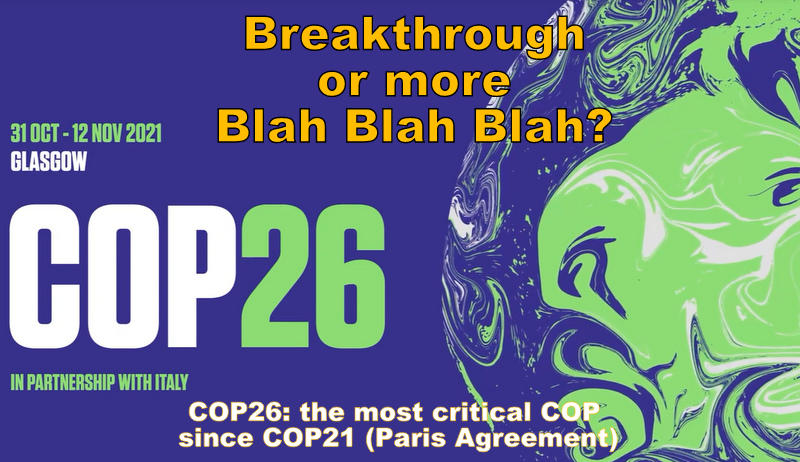 COP26 has been described as “the” critical climate summit to have a chance at limiting the warming of the planet to well below 2ºC, preferably 1.5ºC. Will COP26 keep 1.5 degrees alive? Will it be the answer we’re looking for or yet another dangerous fantasy? In his recent article previously published, Brad Zarnett reflects on the prospects of COP26.

The Answer We’ve Been Waiting For?

Is this the year when things finally change? Will our so-called ‘leaders’ come to their senses and set us on the path to a stable climate? Will they admit that predatory capitalism is the source of environmental and social harm and that it needs to be reigned in? Will they hold corporations accountable for the harm that they unleash onto the world? Don’t bet on it. And that’s not cynicism — it’s observation.

The Ultra Rich See it Differently

Our business model is no accident — it’s been sculpted and tweaked by the corporate elite and billionaires for over 40 years. The goal was always simple: capture as much wealth as possible while sharing as little as possible. In large part that meant shifting responsibility for the environmental and social harm that corporations unleash onto society away from themselves and onto governments and thus taxpayers…and for the most part, it worked. The richest .0001% are truly the kings of our time…and COVID-19 has made it even worse.

But perhaps what’s most important is what these elites tell themselves about their wealth and the system that has enriched them.

As I stated in the article, Nature Is Bringing the Heat and We’re Acting Like a Deer in the Headlights:

They understand that the planet is warming but they see it through another lens. A lens that’s a result of their life experience — a world where deregulated capitalism, low investment taxes, markets and money can solve any problem.

But ideology is only half of the equation…the rest of it is personal:

This is the system in which they achieved their wealth and status. It’s intertwined with everything about them; their home(s), their career, their possessions, their friends, and the ego and power that comes from succeeding in that system. And since most people are inclined to favour what they know best, it’s no wonder that they have difficulty envisioning a world that doesn’t look much different from the flawed system that lies before us.

And for those who think that change is possible, of course it is, but you must remember that their views are constantly being reinforced from within an ideological echo chamber that exists in part to caudal their fragile egos and to convince themselves that the “game” is fair and that they deserve everything that they have.

Now let’s step back and look at the bigger picture. Those elites exist in a society that has spent decades building and reinforcing a culture that glorifies and celebrates the capitalist ideology. A culture that pushes the narrative that unfettered capitalism and free markets are the greatest creator of innovation and wealth that the world has ever seen. A culture that uses the corporate-controlled media to parade hoarding billionaires in front of us to promote their self-serving ideas of how deregulated capitalism can find win-win solutions to even the most challenging environmental and social problems. A culture that peppers us with the idea that by reducing taxes on the investment-savvy rich, we will spontaneously create jobs and build wealth for society as a whole. A culture that tells us that government is wasteful and corrupt and that you cannot trust them with your money. Just leave the big challenges to big-brained billionaires. And if you dare think anything different — you’re instantly labelled a communist.

Expecting the corporate elite to suddenly reverse gears and relinquish power to governments that they’ve labelled as wasteful and incompetent requires a complete shift in their worldview. It’s an incredible expectation that requires a level of optimism that’s simply not rooted in reality. Just like with the financial meltdown of 2008, cheerful optimism that continues to drive you forward despite facing an utter catastrophe clearly shows a break with reality. It’s delusional. It’s dangerous. It’s a fantasy.

Is COP26 the answer?

With the world coming together for COP26 in just a few weeks, on the tail of a new alarming IPCC report, I will add a piece of reality to the conversation. This is COP TWENTY SIX. This has been going on since COP1 in 1995 and the only thing that seems to change each year is the steady rise of carbon emissions and the average temperature of our planet.

It might be a hard fact to swallow but the evidence is clear. The ruling elite have their own vision of a climate plan and they have no intention of handing more power over to governments or tampering with their predatory capitalist system and COP26 will prove powerless to change this.

3 major announcements that you can expect from COP26

This will be celebrated as a turning point and global leaders will rejoice but a closer look at the details will reveal that it’s an empty pledge with no concrete plans, similar to the G7 Ocean Plastics Charter that was signed in Canada in 2018. There will be no talk about policy changes to speed up the dismantling of the oil and gas industry or how they plan to discontinue the trillions in subsidies that the industry receives each year. There will be no talk of an immediate end to new oil and gas infrastructure projects like the pipelines planned in Canada. And to further rub salt in the wound — the oil industry will receive billions in grants to continue its quest for a magic technology that can remove significant amounts of carbon from the atmosphere (CCS) which they hope will give them the social licence to keep polluting.

2) New ambitious timelines for the transition to electric vehicles

Capitalists love this storyline. It’s the one initiative that plays into their ideological fantasy that all problems can be solved in the marketplace. Have you ever noticed how defensive they are of Elon Musk? They put him on a pedestal because they know that their entire worldview is invalidated if you can’t find a profitable way to protect the climate. But truth be told, electric vehicles (EV’s) are given far more credit than they deserve. Yes, it’s a positive initiative and EV’s have a role to play but it’s also incremental and doesn’t really deal with the urgent problem that we face today.

Electric vehicles are a tiny slice of the global car market. There are approximately 1.3 billion cars on the planet of which 11 million are electric — that’s 1%. Next year it’s expected that there will be sales of 3 million electric vehicles out of 70 million — that’s 4%. But politicians are a lazy bunch who crave attention so it’s an easy win to capture a headline by “out targeting” another politicians’ vague commitment about phasing out fossil fuel-powered cars and trucks by a certain date.

This is an easy win for politicians and most countries will gladly jump on the bandwagon but the timeline and environmental benefits will be vague. The big winners will be large construction companies and their shareholders as huge sums of money are transferred from government to the private sector. Now that’s not to say that large-scale renewable projects aren’t positive, they are, but the pledges will ultimately be too small. Climate change is bearing down on us — we need a global commitment of 5–10 trillion every year until 2030 and it must be coordinated with government, industry, and labour if we have a chance to reduce emissions by 45% (80% is better) by 2030 which is the stepping stone to getting to 2050 (2040 is better) net-zero.

What will be missing?

We no longer have the luxury of time. We need policies that immediately reduce emissions but unfortunately the elite’s stranglehold on climate policy will ensure that certain topics will simply be left out of the discussion. For example:

Once we accept the truth, then we can begin to find solutions and implement the kind of disruptive change that’s needed. The elites are working from a script that leads directly to a future of pain and suffering for all life on the planet. We can’t allow this — not for ourselves and not for our children. We need an economic system that rewards the creation of well-being. We must find a way to gain control over the levers of regulatory power. That is the path forward. We have no more time to waste.

ICYMI:
Eliminate 90% of Greenhouse Gas (GHG) Emissions in 15 Years
Carbon Capture and Storage (CCS): A Death Sentence For the Planet