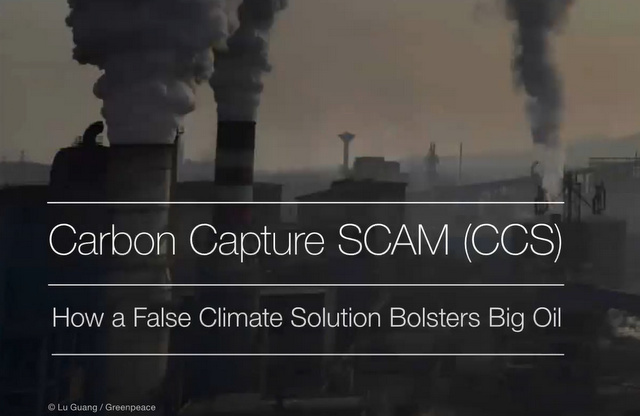 “Carbon capture and storage (CCS) and carbon capture, utilization, and storage (CCUS) will not address the core drivers of the climate crisis or meaningfully reduce GHG emissions, and should not distract from real climate solutions,” according to CIEL (Center for International Environmental Law).

(This article was sourced (with permission) from CIEL — the Center for International Environmental Law.)

In a recent open letter, over 500 organizations are calling on US and Canadian leaders to reject Carbon Capture and Storage (CCS) as a false solution to the climate crisis. A Press Release by the group was published in both Washington, DC and Ottawa.

What is carbon capture and storage?

Carbon capture and storage (CCS) and carbon capture, utilization, and storage (CCUS) are processes designed to collect or “capture” carbon dioxide generated by high-emitting activities like coal- or gas-fired power production or plastics manufacturing. Those captured emissions are then transported to sites where they are used for industrial processes or stored underground.

While both are proposed as technologies to meet global energy and climate goals, CCS and CCUS will not address these core drivers of the climate crisis or meaningfully reduce greenhouse emissions, and should not distract from real climate solutions.

CCS does not remove carbon from the atmosphere. At best, CCS prevents some emissions caused by the combustion of carbon-based fuels from reaching the atmosphere — provided that the captured gases are not later released.

In practice, CCS is a death sentence to the planet:

On July 19th, 2021, over 500 international, US, and Canadian organizations sent an open letter to policymakers calling on them to “reject carbon capture and storage.” The letter was accompanied by ads in The Washington Post and The Hill Times.

We’re joining 500+ civil society organizations in calling on policymakers to recognize that #CarbonCapture and storage (#CCS) is NOT a climate solution but a dangerous distraction driven by the same big polluters who created the #ClimateEmergency.

Read the full open letters to US and Canadian policymakers.
Read statements from organizational leaders  on the dangers of carbon capture.
See the ads in The Washington Post and Ottawa’s The Hill Times.

It’s Time To End the Carbon Capture of Climate Policy 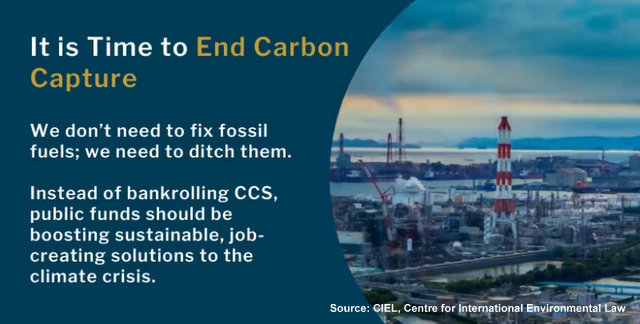 The open letters lay out seven reasons why policymakers must reject CCS:

“Carbon capture is being used as a Trojan horse by oil and gas executives to continue, and even expand, fossil fuel production. It’s a dangerous distraction driven by the same polluters who created the climate emergency. The Government of Canada should not use any kind of financial support or tax incentive to prop up false climate solutions that only serve to delay the necessary transition off of fossil fuels. Instead, we should be focused on real climate solutions including renewable energy and energy efficiency that are job-creating, safe, affordable and ready to be deployed.” — Julia Levin, Senior Climate and Energy Program Manager

Despite occupying center stage in the “net-zero” climate plans trumpeted by the United States and Canada (at the Leaders’ Summit on Climate), and despite government spending programs, and bills pending before both Congress and Parliament, carbon capture is not a climate solution. On the contrary, investing in carbon capture delays the needed transition away from fossil fuels and other combustible energy sources.