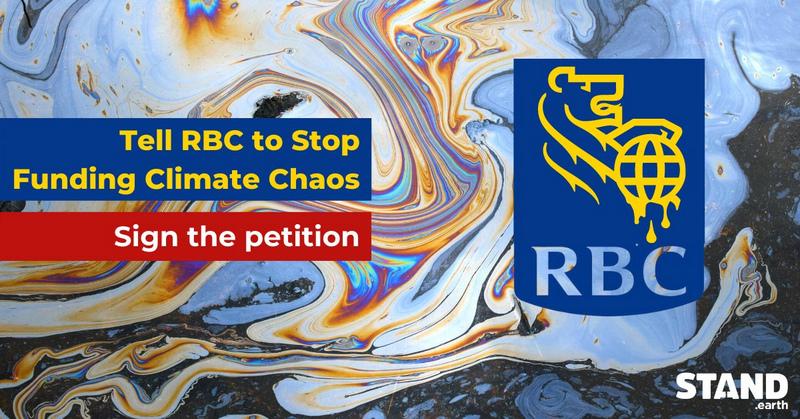 (This article is sourced from the Stand.Earth September 24 press release.)

“Once again, we are seeing RBC fail to make good on their half-baked climate pledges. RBC’s backing of Enbridge and their ineffective sustainability goals, along with a host of other Canadian banking laggards, is a disgrace and pure greenwash,” said Richard Brooks, Director of Climate Finance, Stand.earth. “It is time for banks to stop hiding behind so-called sustainable financing and sustainability linked loans in an attempt to greenwash their continued investments in fossil fuel companies expanding oil and gas production and building new pipelines.

You cannot claim to be taking climate seriously while financing violations of Indigenous rights and environmental degradation.” — Richard Brooks

Despite recent claims to be taking climate change seriously and advancing numerous climate related announcements, RBC remains Canada’s largest financier of coal, oil and gas companies. This record, in the face of extreme weather in Canada, is being highlighted in a national advertising campaign, run by Stand.earth. According to a report by Rainforest Action Network, RBC has poured more than CAD $200 billion into the fossil fuel sector in the five years since the Paris Climate Agreement was adopted in 2015.

In February, RBC pledged to reach net zero in financed emissions by 2050 and to raise its target for “sustainable finance.” But it set no short or medium-term targets that would reduce its fossil fuel financing on a meaningful timeline and defines “sustainable finance” to include fossil fuel companies facilitating the increase of greenhouse gas emissions like Enbridge.

If completed, the Line 3 pipeline will ship more than 760,000 barrels of oil every day, doubling existing capacity. This expansion of emissions is likely to be locked in for decades given the lifespan of a new pipeline, and flies in the face of any net zero commitment. When burned, emissions from this oil would equal about 193 million tons of greenhouse gas per year. If their hypocritical approach to addressing climate change is not bad enough, RBC has publicly lauded itself on having built long-standing relationships with Indigenous communities – relationships built on “mutual respect and shared values”. And yet, they are expanding financing for the construction of the Line 3 pipeline on Anishinaabe land.

Enbridge has also developed a notorious relationship with Minnesota law enforcement, reimbursing armed police for pipeline-related policing in the face of opposition and resistance from Indigenous water protectors.

“Enbridge has paid out over $2M to local law enforcement here in my people’s territory,” said Tara Houska with the Giniw Collective. “We’ve been tortured, shot at, maced, and jailed. Over 800 arrests and gross human rights violations alongside the irrevocable harm to our land, our water, our wild rice. To call any part of this tar sands company ‘sustainable’ is unconscionable. To fund its destruction of what ecosystems remain against the will of multiple tribal nations is abhorrent.”

Stand.earth is calling on RBC to step up and be a leader in the banking industry—that means fulfilling its promise to respect Indigenous rights, and beginning to phase out the financing of fossil fuel companies immediately starting with coal and tar sands exposed companies.

“For years, RBC has been hiding behind empty environmental promises and vague net-zero emission targets, all the while investing billions into coal, oil, gas expansion projects that often violate Indigenous rights,”  said Amy Gray, Senior Climate Finance Strategist, Stand.earth at the launch of the organization’s new national ad campaign. “It’s past time for Canada’s largest bank to kick its addiction to tar sands and coal and help truly build the green and just future we need.”