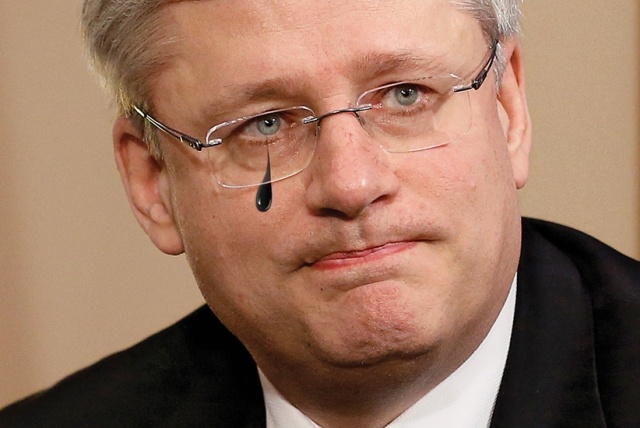 Stephen Harper [recently] made headlines for joining other G7 leaders in committing to “decarbonize” Canada’s economy by 2100. For a brief, flickering moment it seemed Canada’s Prime Minister had started to grasp the reality that tackling climate change means leaving fossil fuels in the ground. Predictably, Harper’s next move was to tell the world’s press that Canada had no plans to “turn off the lights” and wasn’t considering the very thing decarbonization requires — stopping tar sands expansion and making a rapid, justice based transition to a new clean energy economy.

At this point, we’re past giving out brownie points to leaders who acknowledge climate change is happening with empty and half-hearted rhetoric. If the Harper administration were serious about tackling the problem, its goals and policies would reflect the urgency of this crisis instead of kicking the can down the road leading to a world that’s five degrees warmer. Setting a deadline 85 years from now to stop burning fossil fuels may be politically safe, but it completely ignores the science that tells us we need to leave the majority of global fossil fuel reserves underground, including upwards of 85 per cent of Canadian tar sands reserves. Time is of the essence, and every day is crucial as we work to wean our society off carbon-intensive fuels on to renewable energy.

This reality is so clear that over 100 scientists and researchers laid out ten reasons that Canada should freeze tar sands expansion. Reasons run the gamut from the fact that numerous studies tell us tar sands expansion and climate stability are incompatible, to economic arguments and violations of Indigenous and treaty rights. Further expansion would only make these problems worse.

Of course, little of this is new. We’ve been watching Stephen Harper’s refusal to face the reality of climate change on loop for nearly a decade, and we’ve known for years that tar sands expansion and a safe climate future can’t coexist. What we need now is not simply to point these things out, but to come together like never before to chart a new path forward.

We know that climate solutions already exist, be they in the dropping cost of solar energy or the rising tide of people power demanding a clean energy future.

Solutions are on the rails of subway lines and street cars, in the movements creating good, affordable, accessible food, fair wages, and healthy communities. They’re on the front lines, both here in Canada and around the world where those people most impacted by climate change and extraction are digging deep not just to survive climate change, but to be resilient and resistant in the face of it. Solutions are in so many places, and now it’s up to us to weave them together. We don’t just know that we need to leave fossil fuels behind, we know what kind of world we want to build.

In my mind, it’s a world with an economy that works for people and the planet. It’s a story that starts with justice for those communities most impacted — Indigenous peoples and frontline communities not simply fighting climate change but centuries of injustice. It’s about creating good work, clean jobs and healthy communities where no one has to decide between clean water or clean air and putting food on the dinner table, and it’s possible because we have solutions and we know who is responsible for causing this crisis.

Simply put, we can’t leave this challenge to the whims of Stephen Harper and other political leaders. We need to come together, to find what unites us in this vision of a new economy, and to show those in power what real leadership looks like. We can show that people want a swift transition that is built on justice, that creates good work and that moves us off of fossil fuels and into the new economy.

On July 5th, 350.org and dozens of other groups are organizing the March for Jobs, Justice & the Climate in Toronto, ON. Click here for more info.

This article was previously posted on HuffPost, The Blog.