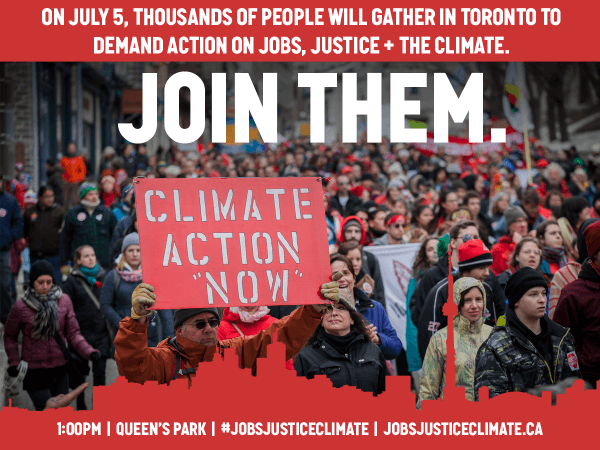 Something is happening in Canada. A new climate movement is gaining momentum during a crucial election year. Change is coming! Come and be a part of it.

Bill Mckibben and Naomi Klein will be at the March for Jobs, Justice and the Climate on Sunday July 5 in Toronto. And I’m joining them! Will you be there as well? #JobsJusticeClimate is the central rallying cry of Canada’s New Climate Movement. Please come and be a part of history.

March for Jobs, Justice and the Climate

In just 6 days the July 5th Toronto ‘March for Jobs, Justice and the Climate’ takes place. Are YOU going? 350 Ottawa is encouraging everyone to join in. What message do you want our leaders to hear?

From July 7-9 Ontario Premier Wynne hosts the ‘Climate Summit of the Americas’ at which leaders from across the Americas are seeking to build new partnerships in the fight against climate change.

Then from July 8-10 ‘The International Economic Forum of the Americas’ will take place to almost certainly advance the same business-as-usual economic agenda that has already brought us the increasing inequality and the climate crisis that we now face.

On the eve of those summits, let’s make sure our leaders hear our demands and choose a justice-based transition to a new energy economy in which corporate polluters pay and everybody benefits.

Can you step forth and help carry this message to our leaders alongside Bill McKibben, Naomi Klein and thousands of others?  Please join the Ottawa bus on July 5th here:  http://ow.ly/OgUrl

This Sunday is #JobsJusticeClimate march in Toronto. Join the Ottawa bus on July 5.  http://ow.ly/OgUrl

“Mobilizing in large numbers is the only way to show leaders that they need to move beyond the politics of the past — and toward the promise of a future that works for everyone.”  Bill McKibben